The Dalai Lama at LSE

On June 20th the Dalai Lama came to the London School of Economics to give a talk titled ‘Resisting Intolerance: an ethical and global challenge‘. Of course I went, despite my appreciation of all the immense ironies involved in seeing him at he LSE. His short bio:

HH the Dalai Lama, Tenzin Gyatso, is the spiritual leader of the Tibetan people. He was born on 6th July 1935 in north-eastern Tibet and recognised as the incarnation of the 13th Dalai Lama at the age of two. Since 1959, he has been living in Dharamsala in the north of India which is now the seat of the Central Tibetan Administration.

In 2011 HH the Dalai Lama completed the process of democratisation of the Central Tibetan Administration by devolving all his political authorities to the elected leadership. How did I miss this happy fact of devolution and the welcome separation of spiritual from temporal power? I don’t know, I suppose these things happen.

I wrote to my dearest friend that same day that the Dalai Lama has a belly laugh that sounded just like my grandfather’s, but he seemed far nicer and wiser. He laughed a great deal. I wonder how much he geared his talk to LSE, it was very focused on fundamentals which I am still pondering. He started with happiness, that all of us strive for a better life and for happiness in that life, and yet we have created a world of immense unhappiness. This can change, must change, with focus on three things: truth, justice, and compassion.

I have been thinking and thinking and at the end of it I think those are the values we need. Those values are fundamentally incompatible with every awful thing that has ever been done in this world, their practice in a real way would make such things unthinkable.

Truth and justice seem to me rather like swords wielded in struggle, and compassion ensures that they are wielded in a way that ends in true healing and makes the world better. We all know how much truth and justice can hurt. He continued to say then that what is needed is action to change the world, not wishes or prayers.

As in liberation theology, I think it is powerful when a religious figure can situate problems and answers squarely in this world and the actions of human beings, giving a strong moral framework for change. While of course I do not believe that you need the religion, I do believe strongly that you need the moral framework, love and compassion are so key to carry with us in our struggles for truth and justice. I think the focus on interior as well as exterior is also key here, and where our movements also lack. How many problems of ego and personality do we encounter in our struggles? Questions of burnout and emptiness and despair? The constant issue of ends and means?

Without a strong interior commitment to uncover our own truths, to be fair and just to ourselves and in our personal relationships, without a strong community of love and support, we fall prey to the terrors and injustices of the world. They are legion

So how do we take this foundation and apply it beyond the personal to our actions and our strategies for analyzing economic and political systems, for changing the world? That is what I found lacking in the talk, and given who else was sitting in the room with me, that left me a little upset. I was glad when the Dalai Lama described exploitation, lying, and cheating as violence. Sadly it is not often described that way, however true it is. But he didn’t connect this violence with the majority of corporations for whom LSE graduates go on to work, and with whom many of the expensively-suited people in the room were intimately connected.

To me it seems so clear that to work for an investment bank is to participate in such violence, but I wonder how many people left the Peacock Theatre with that thought in their minds. Especially when he put on the stupid LSE ballcap. I suppose politeness is something.

But it was indeed wonderful to see him and hear him speak, he was much more frail than I was expecting. To be honest I didn’t know what I was expecting, though I certainly didn’t have the glint of worship and hunger than I espied amongst some other audience members. He seemed far too human and down to earth for such nonsense, but I suppose it doesn’t stop other people from seeing him as something to fill their own holes. It was only a few days later that I saw this photo posted on facebook: 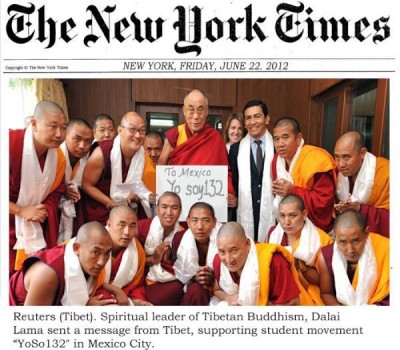 And it definitely made me happy, both his support for the exciting new student movement 132, but also to see that the Dalai Lama chooses sides.