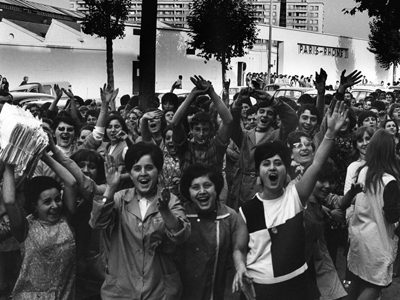 Like most children of French “Soixante Huitards” – or “Sixty Eighters” – I have always been nostalgic for the ‘60s. Even though I was born nearly 20 years later, I felt connected to my mother’s stories of being on the barricades in Paris in May 1968, the spirit of contestation spreading among youth across Europe and the U.S. I related to their desires to break old norms and institutions and to create new ways of exchanging, learning and living. Out of this came tons of experiments in horizontal decision-making, communal living and utopias. (For a wonderful description of this era, read Christopher Hitchens’ “Still a Soixante Huitard.”

While my mother and other students linked arms with workers and declared an urban revolution, others chose to leave city centers for the countryside in what would be known as the “Back-to-the-Land” movement. Throughout Europe and the U.S., young urbanites left cities in droves with the dream of returning to a simpler, more self-sufficient way of life. Rooted in ideals of anti-consumerism, they built rural communes to be more connected to the land and to each other. They grew their own food, and learned skills to build homes and harvest energy. Often times these experiments were coupled with free love, communal living and child rearing.

By the end of the 1970s however, the movement had come and gone. Back-to-the-landers returned to the city, some fleeing poverty to pursue opportunities and jobs booming after the 1979 energy crisis. When I asked a woman about her experience as a back-to-the-lander in Sweden, why it had ended, she simply replied, “Sex”. Apparently, many communes were destroyed by the jealousy brought on by the “free love” movement.

While the world has since become hyper-capitalistic and decidedly urban, the past two decades have seen a return to many of these same “back-to-the-land” experiments, with things such as WWOOFing, radical homesteading, “slow food” and “intentional living”. Nearly 50 years later, this movement seems to come out of the same desire for alternatives to capitalist modes of consumption and production, and as a resistance to a world that seems increasingly disconnected from community and the land. As Daniel Cohn Bendit, one of the leaders of the May 68 student uprising, proclaimed as a way of summing up the 60s, “Nous l’avons tant aimé la revolution” – “How we loved the revolution”.