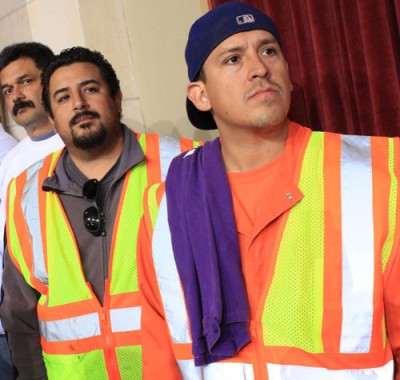 While it’s odd to think of Los Angeles as fitting in the theme of a Resistance City, there are hardcore struggles going on in various sectors of the vast metropolis.  For instance on the economic front, in what’s becoming a familiar refrain, yet again public worker union members had to mobilize and descend on Los Angeles City Hall on January 12 at a city council hearing.  Mind you, I’m not an unbiased observer as I do contract communications work for one of the affected unions, Local 3090 of the American Federation of State, County and Municipal Employees (AFSCME).  The local’s members include 911 police emergency dispatchers, clerks in the Building and Safety department, and message clerks in the library system.  It’s predominantly a female local, with a high number of people of color in its numbers.

On the table before the council was another drastic proposal by the city’s Chief Accounting Officer, Miguel Santana.  He’d argued for the city to lease out nine city-owned parking garages to private entities — a deal that’s supposed to realize $300 million eventually, with the city seeing some $53.2 million this fiscal year to help balance the budget.  Another round of so-called “shared sacrifice” the pols like to call it.  A phrase unionized auto workers would tell you has a cynical ring to it.

If the council voted not to do this, then Santana said there would have to be another work day furlough imposed on the workers.  This would not be rolling furlough days as there are now – 26 in a fiscal year, but one furlough day a week until the end of this fiscal year on July 1 (the shortfall for fiscal year 2011-12 for the city is projected to be $350 million).

Essentially these new furloughs would have closed departments each Friday or every other Friday.  For several days running up to this hearing, Local 3090 and other public worker unions including the firefighters and recreation and parks workers, emailed and called the city council urging them to vote yes to leasing out the parking garages.

While the city council eventually agreed to lease out the garages, this is but one more effort at triage for the city and its workers they’ve been at over many months.   This comes at a time when the attacks on public workers are increasing, blaming them and their “fat” pensions for cities’ deficits.

The reality is that many public workers’ pensions may be as little as $19,000 a year (childcare workers as an example), and because of public worker contract language, they don’t collect Social Security because they have not paid into the fund.

Newly minted Ohio Governor John Kasich wants to eliminate collective bargaining agreements.  He’s explains, “If they want to strike they should be fired.  I really don’t favor the right to strike by any public employee.  They’ve got good jobs, they’ve got high pay, they get good benefits, a great retirement.  What are they striking for?”  Kasich is a multi-millionaire who received a $400,000 bonus as managing director of Lehman Brothers the year they went bankrupt, thus completing their substantial contribution to the economic meltdown.

This kind of discourse is merely a shell game, advanced by those with a long history of undermining labor unions, and public employees in particular.  In his commentary, “The Shameful Attack on Public Employees,” former Secretary of Labor Robert Reich writes:

“Compare apples to apples and you’d see that over the last fifteen years the pay of public sector workers has dropped relative to private-sector employees with the same level of education. Public sector workers now earn 11 % less than comparable workers in the private sector, and local workers 12 % less. (Even if you include health and retirement benefits, government employees still earn less than their private-sector counterparts with similar educations.)”

Back in L.A., the unions pointed out the City’s inefficient track record in collecting fees and taxes.  Last spring the City Council created the Ad Hoc Committee of Revenue Efficiency.  By their own accounting, 76.6% of the City’s $541.1 million in non-tax receivables (that is money owed that hasn’t been collected) are more than 120 days past due.  Forty-two and a half percent of those uncollected funds are more than 2 years past due, and are thus essentially uncollectible.

Another example of this triage is Measure L on the ballot in the March L.A. election.  It’s not a tax increase but an effort to entice voters to okay a reconfiguration of existing revenues back into the gutted library system.  While the measure has some chance of passing, there used to be a time when you came to the voters with bond measures — taking on debt essentially — for schools or libraries, and it was a given such measures would pass.  These entities were seen as necessities for the continued advancement of our children, and were part and parcel of what a forward-thinking city provided its residents.

Rekindling public support and political will to bolster, not continually hobble, the social infrastructure is going to be a contracted effort.  Yet as Reich warns, the facts must be presented to the public, not lies and distortions used to gain ideological ground at the expense of those workers.