On April 27, 1992, my mother had to make probably one of the most difficult decisions in her life—take my grandmother off life-support. I was 8 years-old and I remember standing in the hallway, outside Mama Toya’s room because the doctors and nurses said I was too young to see her. Her long battle with Colon Cancer was finally over, a painful disease that transformed a vibrant and resilient woman into a frail 40-pound shell of a person. She was finally at peace. The pillar of our family left this earth as Los Angeles was at the brink of burning in flames. 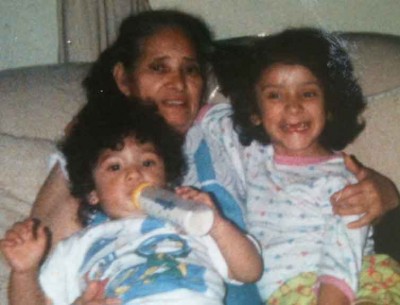 Victoria Quintanilla, better know to us as Mama Toya or Niña Toya, arrived to the United States in 1986, six years after my mother came to Los Angeles and three years after I was born. Originally from Nueva Conception, Chalatenango, she made the journey to San Salvador on her own in search for better opportunities when she was very young. She was only able to obtain a third-grade education, although she always dreamed of becoming a school teacher. Due to the limited education opportunities available to girls, especially those from the countryside, my grandmother made a living as a street vendor, selling her “world famous” yuca with cabbage and turkey sandwiches. She never married and raised two children on her own, Jorge and Martha (my mother). Her Catholic faith formed her core values and beliefs and made sure that despite her hardships, she could never lose her faith in God. Thanks to her I learned about San Martin de Porres, patron saint of the poor and of racial tolerance.

El Salvador was was in the middle of a Civil War that seemed as though it would never end, and had already taken my uncle Jorge, Mama Toya’s only son. Any hope of finding him after he disappeared was slowly dissipating. After all, he was very involved with the movement led by the FMLN. Alone in San Salvador and poor, my grandmother decided to make the trek to the States. What was a new family living in Pico-Union turned into a packed house with five kids and Mama Toya, all in a one-bedroom. We eventually moved to a two-bedroom apartment in South LA a year later.

Although she hated it here at first, her fearlessness never stopped her from adapting to new environments. Mama Toya found a new community of friends at St Thomas the Apostle Church, on Pico and Normandie. She learned to explore the city by bus and I never left her side. I have the fondest memories of exploring Downtown and our neighborhood with Mama Toya, and having spanakopitas at Papa Cristo’s after mass. She taught me how to be strong, independent, and be proud of being different.

After a few years in the States, Mama Toya developed problems with her digestive system, and she was afraid to tell us. After all, she was undocumented, lacked health care, and she was not one to show any weakness. Over time, her health continued to deteriorate until she was diagnosed with Colon Cancer. The prognosis was devastating to the entire family and money was scarce. My oldest sister Carolina put off college to be her full-time caretaker and we all had to pick up our own weight around the house, including watching over Ricardito, the newest addition to the family. My parents didn’t like to talk about Mama Toya’s condition, but I knew that the possibility of her dying was real.

At the beginning of 1992, the chances of her beating Cancer were becoming slim. Her last few months alive were spent at LA County-USC Medical Center. The last time I saw her, she could barely talk and was barely recognizable. What was about to happen to Los Angeles was the last thing on our minds. Before she passed away, Mama Toya told my mother that she did not want to be buried in the United States.  The trauma of the Civil War and US involvement in state-funded terrorism left a bitter taste in her month. Her remains did not deserve to be in the States. And two days before all hell broke lose, she passed away.

It felt so sudden and there was little time for preparation. But it was a culmination of years of neglect, lack of resources, and just straight up poverty that led to that moment. For both Los Angeles and the Cornejo family. On the corner of Florence and Normandie is where it all began on April 29th. Meanwhile, that morning, on LaBrea and Jefferson, we were having Mama Toya’s service at Spalding Mortuary. One of the few black-owned businesses in our neighborhood, the mortuary was spared from arson that day. Mama Toya looked so peaceful that morning when I walked over to her casket, that I forgot that the looters were waiting for our service to end before blowing up the gas station next door. We quickly walked back home and ironically, losing our neighborhood during the unrest was the distraction we needed to deal with the loss of the most important person in our family. For the next six days, we were forced to stay indoors to protect us from the smoke, while my mother prepared the last details for sending Mama Toya’s body to El Salvador.

For much of my adolescence, I felt so much pain, anger, and confusion around April every year. I lost the person who I went to church with, walked to school with, and ate dinner with every night. And every time I left the house, I was reminded of what we lost in so many ways. Twenty years later, it feels like only yesterday, Mama Toya left us while LA crumbled.