No Such Thing As Easy Money: Corporate Speculation

’tis a Trade founded in Fraud, born of Deceit, and nourished by Trick, Cheat, Wheedle, Forgeries, Falshoods, and all sorts of Delusions; Coining false News, this way good, that way bad; whispering imaginary Terrors, Frights, Hopes, Expectations, and then preying upon the Weakness of those, whose Imaginations they have wrought upon, whom they have either elevated or depress’d. If they meet with a Cull, a young Dealer that has Money to lay out, they catch him at the Door, whisper to him, Sir, here is a great piece of News, it is not yet publick, it is worth a Thousand Guineas but to mention it: I am heartily glad I met you, but it must be as secret as the black side of your Soul, for they know nothing of it yet in the Coffee-House, if they should, Stock would rise 10 per Cent. in a moment, and I warrant you South-Sea will be 130 in a Week’s Time, after it is known… Are you sure of it, says the Fish, who jumps eagerly into the Net?

This is the thievery of the stock market speculator upon the unwary investor, and it has been practiced for centuries now. It is a familiar story of the sucker ruined, the fortune gone. When someone loses everything in the stock market people shake their heads, we all know it’s a gamble. But for those who win? No, they earned it.

It’s an odd thing about speculation, how people turn it into work. Crooked gamblers make a living learning their tricks, guaranteeing their play is no gamble. They like to bet on a sure thing. This has everything in common with certain ranks in stock market speculation.

It started with merchants hundreds of years ago, they wanted to send out ships to bring back spices, furs, cloth and other luxuries. Individual traders had been doing it for centuries, but it was a lot of money to finance an expedition, and that meant total ruin for an individual when things went wrong. They went wrong all the time. Still, traders gambled first that their goods would get to the next town, the next country, the next continent over; second that someone would want to trade for those goods; third, that the traded goods would make it all the way back; fourth, that folks back home would want what the others had been willing to trade.

A big gamble for one person.

So groups of merchants began working together to reduce the risk. In Europe this started in the 1200s, in the late 1400s there are incorporation documents, official recognitions. These were feudal times, Kings wouldn’t allow a group of people to just get together and form an organisation without permission — just like he wouldn’t let them travel or trade without permission. Thus chartered companies formed. Throughout their history they worked immensely hard so that their speculations would be as small of a gamble as possible.

What did they want to reduce their risk to the minimum? Complete power over their employees in foreign lands. Monopoly in trade. The right to treat with foreign governments and choose the ambassador. Eventually the right to seize territory, to colonise. The right to have security forces, and then armies. And proof that the Crown had their backs if anything went wrong. To a greater or lesser extent they got all of these things.

They formed companies to trade with Russia and the Levant. To trade in slaves, gold and ivory, and then to colonise Africa. To colonise North America and the West Indies. A lot of companies. A lot of bubbles and busts. In 1719 they were already talking about bulls and bears.

The mother of them all perhaps, is the East India Company (EIC). Not the first, but probably the biggest, the most profitable, the best remembered. I don’t even know where to start with the EIC, but agree with Nick Robins that it was The Company That Changed the World. It did this by ensuring that its speculation was no gamble in ever larger more violent and spectacular ways.

Established on a cold New Year’s Eve, 1600, England’s East India Company is the mother of the modern corporation. In its more than two and a half centuries of existence, it bridged the mercantilist world of chartered monopolies and the industrial age of corporations accountable solely to shareholders. The Company’s establishment by royal charter, its monopoly of all trade between Britain and Asia and its semi-sovereign privileges to rule territories and raise armies certainly mark it out as a corporate institution from another time. Yet in its financing, structures of governance and business dynamics, the Company was undeniably modern (5).

They changed the face of London with their massive building of docks, warehouses and offices, built this monument to themselves in Leadenhall Street — though not even a plaque remains of it: 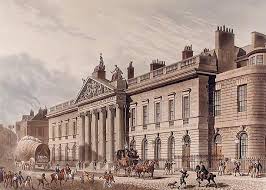 But let us see what it did to ensure profits were returned to all those who had speculated in the company’s future. Initially it negotiated with local rulers and followed their rules governing what it could trade and what it could not. But back in England it was busy bribing both King and courtiers to ensure that its charter was regularly extended, and to earn more favourable treatment and profits. It was also busy buying seats in Parliament. Daniel Defoe was one of many who really hated that.

The structure of the company itself was a way to allow shareholders and directors to be beholden to themselves — just as a modern corporation. Their only goal was profit. The corporation itself shielded them from responsibility, allowing them to pursue their greed with no repercussions.

This it is hardly surprising that corruption, bribery and a mean bag of tricks were used in India as well, but the immense profits this gained the company were not enough, and they chaffed under the local rules. So we come to the Battle of Plassey, 23 June 1757. Robert Clive sacked Calcutta and took over Bengal, transferring an estimated 2/3 of its wealth back to England within ten years. Bengal was once one of the richest areas in the world, it quickly became one of the poorest (and I mourn that it is still one of the poorest today). In 1770, Governor Hastings estimated 10 million died in the famine, about a third of the population — even as the EIC raised taxes and continued exporting grain. In 1877 Bengal suffered another such major famine, the scale of which is unimaginable to me. Another 10 million estimated dead. Robins says “Cornelius Walford calculated that in the 120 years of British rule there had been 34 famines in India, compared with only 17 recorded famines in the entire previous two millenia” (93).

Intertwined with this is the story of EIC trade with China, who wanted nothing much that England had, restricted English access to their markets and withheld from them the secrets of tea. So the English worked hard to steal the secret of tea, and succeeded. They demanded they be allowed to sell opium to the Chinese, and failed…until they went to war to enforce this right with the help of the English navy.

More force and tricks the difference between ‘speculation’ paying off or not.

Opium was immensely lucrative, as was the tea now being planted outside of China. The speculators were immensely pleased. Even when the Company fell apart and was taken over by the Crown, the investors were still well taken care of. They made good sure of that. India continued the taxes that funded the Crown’s buyout of stock.

The point is, I suppose, that these men gambled in one sense, but let neither morals nor conscience get in the way of ensuring their gamble was as much of a sure thing as possible. I’m talking about the ones with real power, the elite. The only ones speculating in the true sense of the word were the small fry investors, pulled here and there by the promises of easy wealth. In general, they were the ones to lose.

That is the biggest resonance with today, we all know who lost everything in the recent crisis, and who was bailed out by yet another government and came out ahead. That and Monumental building:

This is a view of the key area belonging to the EIC and the city, looking towards where Leadenhall and Fenchurch Streets split. A little further down they become Cornhill and Lombard Street, the centre of stock speculation in Exchange Alley adjacent to the Royal Exchange:

The change lies in the towering structures that now represent banking might, but not the activities that go on inside of them: 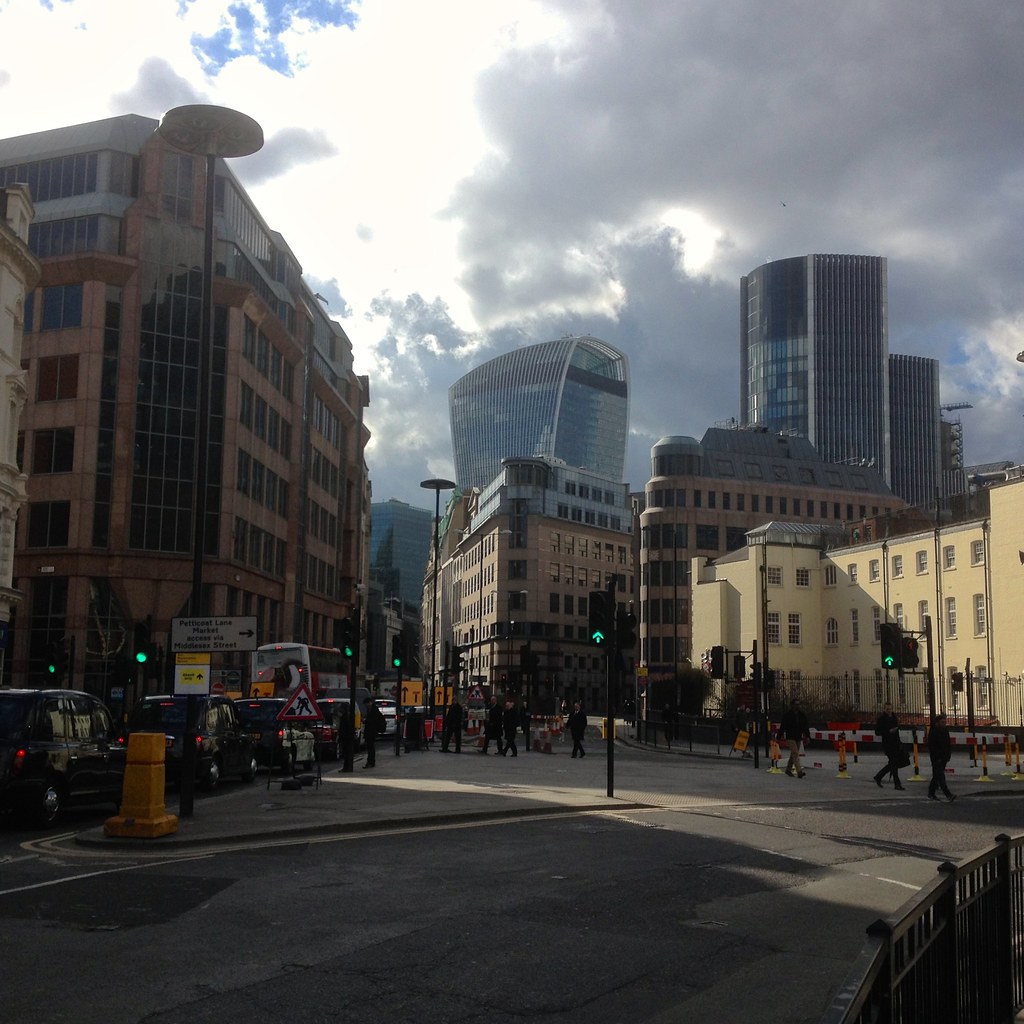 Nor the existence of the powerful who don’t really speculate, but who wield wealth and use it to convince enough of those below them to gamble their all…

“Are you sure of it, says the Fish, who jumps eagerly into the Net?”