Rosten Woo  is a designer, planner, and popular educator who recently moved to L.A. from N.Y. after several years as Director of the Center for Urban Pedagogy. He has partnered with Gilda to design an urban planning game that introduces people to the purpose and politics of zoning—the invisible rules that make cities look the way they do. What follows is the first in a series of Rosten’s thoughts on the experience of making the game. 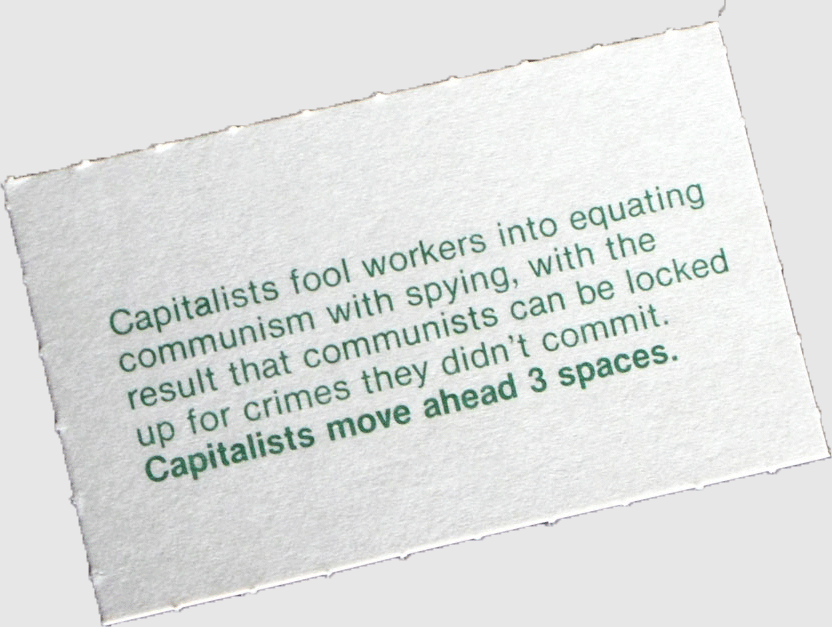 We started this project with the goal of making an on-line encapsulation of some of the popular education work that Gilda had been producing here in Los Angeles (which was wonderfully parallel with some of my last work with the Center for Urban Pedagogy (CUP).

As Gilda has chronicled earlier, our research process took a (rather extended) detour from a digital space to a board game. Workshopping ideas in a board-game format allows us to test out interaction ideas in a live setting (with real people) with pretty low costs (snacks, ink cartridges, and paper) and quick turnaround times. Though the eventual on-line learning environment we create will probably be pretty dramatically different from the boardgames we are testing, we’re learning quite a lot – and at the end of the process we’ll have a board game, too.

There are a lot of reasons that making a board game about land use issues seems like a no-brainer fit:

1. The format is inherently spatial, many of the most popular boardgames deal with territory and real estate (Risk, Monopoly, Settlers of Catan).

2. Games provide a set structure for interaction and engagement that people are familiar with and enjoy. Games encourage social learning and (can) generate laughter, personal connections. Ideal for popular education workshops.

3. Games can give players access to roles and points of view that may be different than their own.  This is a critical part of thinking about planning, land use, and zoning in particular.

At the same time, there are quite a few reasons why making a zoning boardgame could be a terrible idea. Indeed, I had previously started and abandoned a boardgame project about NYC’s Uniform Land Use Review Process (ULURP) a few years before (long story).

Having played enough “educational games” that were neither educational nor entertaining, I didn’t imagine that the task we had set for ourselves would be particularly easy and, for reasons beyond my control, I often start out a design challenge with some intense negative thinking about what I want to avoid.

In a workshop setting, this strategy can make a lot of sense, particularly if you are working with a broad array of different players who may have widely varying levels of gaming interest or experience. In that case, playing “Urban Planning Scrabble” might connect with the audience by using familiar conventions. This cuts down the discomfort (and time) that learning any kind of new rules entails. With a re-skinned version of an iconic game, you can create a slightly more engaging structure for delivering bits of rote content. The game works as a memory-enhancer or a way for people to test their knowledge in non- (or less)) intimidating way.

The problem here is that the core gameplay dynamics, the system that you are asking the player to master, has nothing to do with the content that you’d like them to engage.  As someone who loves playing games, making new urban planning clothes for an unrelated game mechanic seemed kind of sad.  While “Urban Planning Scrabble” doesn’t really have much to say about urban planning dynamics, it might help you learn the names of some key areas of content.  Punchline: The barrier to entry is low, but so is the pay-off for the player. 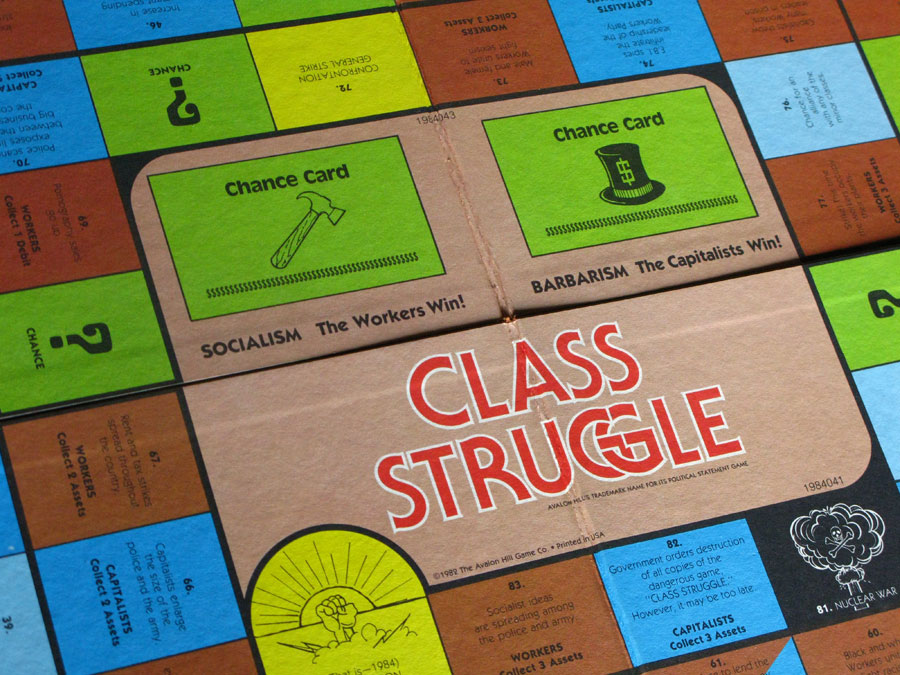 As entertaining as the conceit is, there’s not much to be learned through the actual

gameplay of Class Struggle,which has essentially the same game dynamics as Uncle Wiggly.

2.  Failure to abstract: A second kind of bad educational game tries to model a particular situation so closely that the game becomes more or less unplayable to normal people. As a, well, as a nerd who loves nothing more than playing arcane German boardgames, I have to rely on testers and colleagues to make sure that we don’t go off the deep end here (more on that later). Like Borges’ map produced in 1:1 scale with the world, these games don’t clarify systems so much as replicate them. A beautiful example of this kind of game is Smog (I have to disagree with Gilda’s earlier note and say that it’s pretty gorgeous in its stark 1970s bureaucrat-chic). Smog has a beautiful formal logic, but by the time you’ve calculated the wind-factor, organized the voting public, calculated public opinion, and indexed the number of smog producing factories by the number of automobiles per unit of population and added 10% interest – well, you might as well have sat down with a white paper on air pollution. 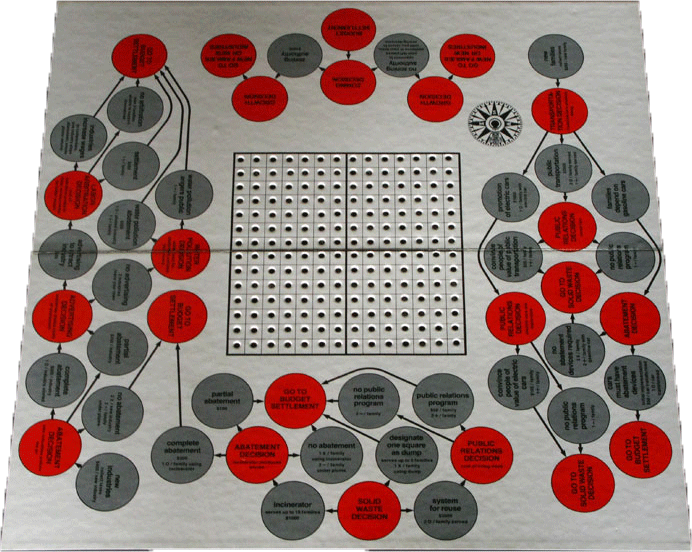 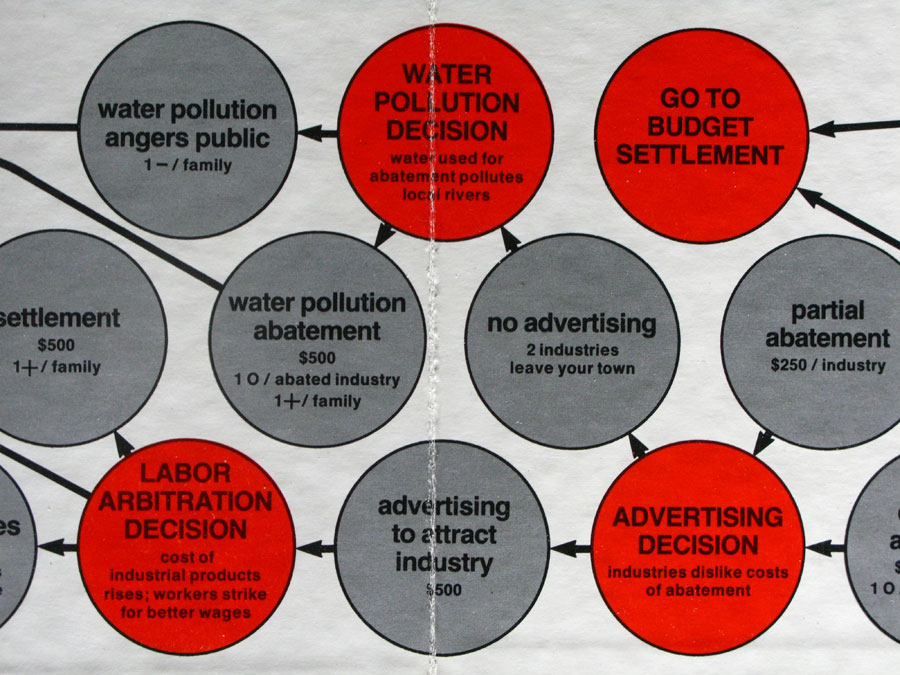 While there’s nothing inherently wrong about creating , or playing incredibly detailed simulation oriented games (or, maybe there is, read this great cautionary essay about Sim City by Paul Starr) they are pretty deeply inappropriate for our goal: to create materials that can be used quickly in a workshop setting to intrigue and engage people who would otherwise not have an interest in zoning mechanics.

In order to succeed we needed to figure out what the core aspects of the zoning experience were and translate them into an accessible game dynamic that would be quick to learn, deep enough to engage a wide range of people for 45 minutes and true enough to the reality of zoning so as not to offend, mislead, or enrage any of our constituents.

For your entertainment, here are a few newspaper articles about Ghetto, the original urban simulation game (original title “How Black People Live”). Designed by the Hopkins Games Program headed by Johns Hopkins professor, James S. Coleman, as a way to model and better understand behavior and decision-making.  Coleman also made the games “Democracy”, “Community Disaster”, “Consumer” and “Generation Gap”).

To be continued with some more creative negative thinking…

Next week: Why We Are Not (Re)Building Sim City