Considerable genius has been applied of late to the business of making facts come alive in maps in ways that allow us to visualize inequality and inspire new ways of thinking about change.

This amazing effort maps the largely undiscussed fact that our prisons contain people who are from discrete, specific neighborhoods. The maps illustrate the blocks in our cities and neighborhoods where at least a million dollars is spent to incarcerate people. The point, according to Eric Cadora of the Justice Mapping Center,” is to produce the conversations necessary to figure out what it would take to break the cycle of prison at the street level.” For example, what choices could and would neighborhoods make if they were give the millions of dollars that it cost to incarcerate their members?

Would they invest in schools, literacy programs, and job development? Child care and housing? Would they keep some people in prison and send some money back, and keep some in the community and take care of them? The images are a stunning indictment of the growing criminalization of the poor in the U.S. The idea of this kind of discourse is by contrast very hopeful in terms of imagining participatory budgeting in the United States, taken to a level of deep values.

For more about the making of the Million Dollar Block maps, see the “Rap Map” article from the New Yorker

With a self-expressed purpose as a “fact tank,” Gapminder was originally developed by Anna Rosling Rönnlund and Hans Rosling to demonstrate their brilliant Trendalyzer software which they say “unveils the beauty of statistical time series by converting boring numbers into enjoyable, animated and interactive graphics.” And so it does. Check out their maps about inequality, this videos of Hans Rosling at TED, and more at the gapminder.org site. Although Rosling’s interpretations trend (enthusiastically) towards the neoliberal and trickle-down— the potential these kind of maps could have if accompanied by more diverse voices still shines through.

Sponsored by the International Budget Partnership (a project of the Center for  Budget and Policy Priorities) this extremely comprehensive effort is dedicated to the proposition that more transparent and accountable government budgets translate into concrete and positive impacts on the lives of the poor. Click on a country on their interactive 2008 Open Budget Index Map and you will find a summary of any of 85 countries’ budget transparency rating. The big punch line is that “80% of governments do not account for spending.” The U.S. scores high in this company, with a score of 85% just under the U.K., South Africa, France, and New Zealand, the worlds most budget-transparent and accountable nations. [the map appears to be no longer available. click here to see the new Budget Tracker infographic instead] 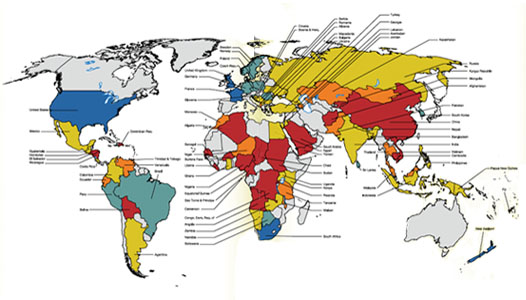