Zen and the Art of Yard Work 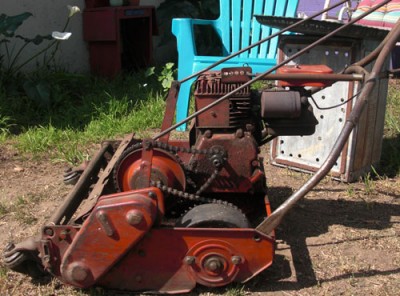 There’s a story we tell in the family having to do with my dad, Dikes, who has passed on now.  But some years ago when my great Aunt Jo died in Shelby, Mississippi, Pop went down there to settle matters.  Shelby is in the Delta, next door to Clarksdale, a town that figures in the birth of the blues.  Both towns are depicted in one of my Ivan Monk novels, Only the Wicked.

Anyway, the task Pop took care of was getting a stand of pecan trees cleared off Aunt Jo’s farmland — land that had been owned on my mother’s side of the family since founded by her freed slave ancestors.  There was a ticking clock.  Local legislation was pending to prevent old trees like these from being uprooted.  When I was a kid, Aunt Jo, a spinster who shot and ate squirrel, would send me a large box of pecans each year for Christmas.

My dad was a mechanic so cars and car parts figured in his life, not trees and green space shall we say.  So for the right price Pop found a guy with a bulldozer and some heavy gauge chains, and got those bothersome pecan tress removed.  He proudly took pictures of the barren field.  To paraphrase Ronald Reagan, a president my staunch Democrat father did not approve, “If you’ve seen one pecan tree, you’ve seen ‘em all.”

Like my dad, I too am pretty much not all that big on greenery. I understand the need for a healthy and clean environment and fully support such measures. It’s just not something that makes me tingle in my bones.

It is funny, then, that our house came with a backyard of bougainvillea, a fig tree, lilies, and thanks to Gilda, a leafy artichoke plant in the center of the lawn.  And, how fortuitous that my farsighted pop bought us a power mower when we first moved there. It’s not one of those modern numbers with a circular blade underneath its shell, but an old-fashioned Briggs and Stratton machine with the blades up front –– as they should be.

We’ve had the mower more than 25 years now, and it was bought used.  I’ve had various parts, including the axel, replaced and am thankful there’s a lawn mower shop in our neighborhood on Pico where I take it regularly for service.  That mower has done yeoman’s service in maintaining our front and back yards.  For it is in the backyard, that while possessing no green thumb, I hack and slash and prune back the shrubbery to keep the yard neat.

And long before it got to be a environmental thing about not using the catch basket to gather the grass, but leaving it on the ground, I was doing that.  (Okay, I found it a hassle to have the damn basket on as it was always getting knocked loose –– but still.)

Each time I clean up our backyard, the very act of the cutting and trimming brings a modicum of Zen to me as I sweat.  As I by rote pull out yards of creeper vines, my mind can reflect on other matters or better yet, simply zone out.

Not only is my goal to make the yard presentable, but to take advantage of the two plastic Adirondack chairs we have placed in a clear space next to the tool shed where we keep the mower and power edger.  Between the chairs is a jury-rigged table, a copper decorative tray of some sort of Indian design, propped on a wooden milk crate.

The true reason then that I keep the backyard neat is that this is where I can go sit in the evening, smoke a cigar, and have a sip or two of scotch.  Where I can decompress, contemplate the universe, relax and wonder, calmly, just why Gonzaga and UCLA both got knocked out in March Madness.