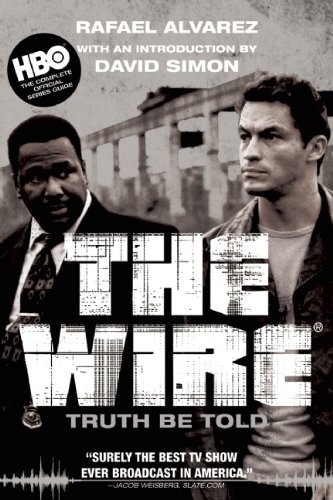 David Simon, creator and executive producer (with former Baltimore detective Ed Burns) of The Wire, wrote of two competing myths in America in an introduction to The Wire: Truth be Told by Rafael Alvarez (who wrote episodes of the show), a book examining the creative and actual arenas that underscored his series that resonated beyond the actual numbers of people who watched the episodic on HBO.

He stated if you were smarter, shrewder or frugal or visionary, the first with the best idea, given the process of the free market, you will succeed beyond your wildest imagination.  Conversely, if you don’t posses those qualities, if you’re not slick or cunning, but willing to work hard, be a citizen and devoted to your family, why there was something for you too.

Simon went on to note that in Baltimore with its brownfields, rotting piers and rusting factories, are testament that the economy shifted then shifted again, rendering obsolete generations of union-wage workers and workers’ families.  The Wire then is a story wedged between these two competing American myths. Physically, The Wire’s West Baltimore landscape of cracked sidewalks, busted out street lamps and streets dotted with boarded up row houses reflects the physical manifestations of the shifted economy, as well as a the signs of the underground economy that partially filled the economic vacuum – the drug trade.

Urban planners write about spatial justice, about how cities are laid out, developments developed, and you get results like park poor, healthcare deficient and public transit lacking urban cores.  It has been shown how blueprints can codify class and race-based policies that short-change people of color and the working poor.  Grassroots organization arise in response to these inequalities to organize residents to push back on such planning that has historically left them out of the process or marginalized their needs and concerns.

The Wire was a crime drama that in its five seasons focused on various sectors of Baltimore as it told its overall story of the effects of the drug trade on the cops and criminals. The ports, city government and bureaucracy (including the police hierarchy), the school system, and the newspaper room were examined.  Interestingly, there was no representation of the nonprofit or community organizing work in the city, as if these were either sacred cows or simply unknown territory for the producers to explore.

On a basic level, stories about drug lords are spatial struggles given any one gangster needs to hold and control a certain amount of turf to maintain and even grow their profits.  The historic St. Valentine’s Day Massacre in Chicago was an incident during Prohibition wherein Al “Scarface” Capone rubbed out members of Bugs Moran’s gang in a garage over expansion conflicts of their respective illegal alcohol, “hooch,” trade.

In modern times as portrayed in the fictional Wire, ganglords, Avon Barksdale, Mario Stanfield and Stringer Bell employ the murderous methods of their criminal real life forbearers like Capone and Frank Lucas, the heroin king of Harlem in the 1970s – immortalized in the feature film American Gangster.  In Bell’s case, he also took a few pages from Meyer Lansky’s playbook and sought to invest his ill gotten gains into legitimate enterprises.  Symbolically Bell is gunned down at the construction site of the corporate development he’s put money into.  For him, there is no way to buy into the suites as the life he led on the streets claim his life.

Being a crime and mystery writer I’m always trying to figure out new twists in the genre as The Wire did.

What about a story of an urban planner who came out of the ‘hood?  She’s bright, overcomes her underclass beginnings, matriculated to one of the Seven Sisters, and is now working with community groups to better their lives.  Only after repeated roadblocks trying to make things happen with the city and recalcitrant developers, she figures to take that step out of line.  She uses her skill at research, aided by a techie friend to also do some bugging, to amass dirty secrets on the pols and business people.  She derives their weaknesses and through intermediaries is able to manipulate them to move forward a different agenda.  But this road she’s taken of course begins to corrupt her as she finds it’s good to be a shot caller.

The title?  Queen of the City (Space) of course