Yes, women have it worse than men. But for women of color, it’s even worse.

For all the advances and successes of previous generations that have influenced where I am today–as a U.S Citizen, educated woman of  color gainfully employed–I am eternally indebted. My commitment to social and racial justice work is how I am choosing to take on the baton.

The feminist movements of the 20th century that I learned about as a student taught me that there is a shared history among all women. Absorbing this history at a relatively progressive, all-girl catholic school taught me that there can be no better way of understanding your past than in a room full of other young women working to be productive, successful, independent, and politically aware. However, that sense of “shared history” would disappear once the school day was over. Some girls would drive away in their brand new Mercedes Benz their parents bought for their 16th birthday. While I hopped on the 207 bus to my house in South LA with the “bus crew,” the other working class students whose parents worked countless hours to provide us with a better education. And for every one of us who “made it” and went on to college, there are many other young women of color who unfortunately do not have that option due to existing racial and socio-economic inequalities. She showed me that brown women can be
extraordinary community organizers

As I got older, I thought things would get easier, as I am part of a generation that can, to some degree, find some people of color to call professional colleagues. And I continue to put things into perspective within my own family’s history. In a matter of three generations, women in my family went from only reaching a third-grade education to obtaining a graduate degree.

I can say that I work alongside women of various ethnicities in a supportive work environment. But my family life is different from that of my white counterparts. I have to save money, not necessarily for me, but for my parents, as they are getting older and have little to no retirement savings and to pay off the tens of thousands of dollars in loans I had to get in order to finance my six years of higher education. When I had to explain to some of my friends that I  helped my parents pay for medical expenses, and at one point, pay the mortgage while I was an undergrad, they asked, “Why do you have to do it? And don’t your parents have other kids?”

The answer is “Yes,” to both of those questions. While I fortunately do not have to make the same type of financial sacrifices as my mother (or grandmother for that matter), there are certain responsibilities that I hold as a daughter of immigrants –– as the only child who has had the opportunity to attend college, and as the only female sibling without kids.

According to the 2010 report “Lifting As We Climb: Women of Color, Wealth and America’s Future,” published by The Insight Center for Community Economic Development, single black women have a median wealth of $100 and single Latinas $120, respectively.  The median wealth of single white women is $41,500. Women of color are more likely to be heads of households and take on more financial responsibilities than white women, causing them to accumulate more debt and acquire (or inherit) less wealth.

Will my daughter also be worth less than her white friends? 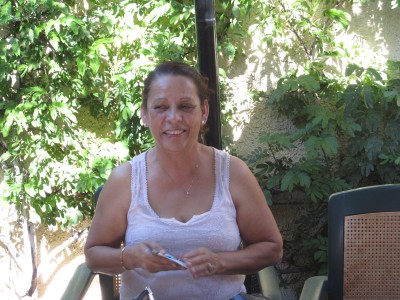 The woman who taught me that another world is possible