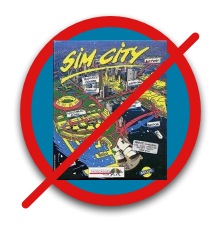 When I mention that I’m working on a game about urban planning, the first reaction I get is often “oh, you mean like SimCity?”

Not exactly. SimCity is the most well-known city planning game/toy of all time. It teaches a particular brand of city-planning knowledge. You, as the planner, allocate resources across a grid in a technocratic (possibly totalitarian) exercise. Evaluating SimCity as rhetoric, it is probably one of the more persuasive pieces of media on urban planning ever designed (how many people have learned biases about siting toxic facilities by playing this game?).

But what exactly is learned by playing Sim City?

Succeeding at Sim City (just like any other game) involves learning and mastering the rules of a system.

The rules in this case, happen to be models of how a real city might work. SimCity insofar as it is a winnable “game” is a series of interrelated hidden assumptions for the player to discover through trial and error. Does building more police precincts reduce crime and civil unrest? Yes, according to SimCity. Is a low-tax base critical to popular support, also yes!

Paul Starr has a great article about the Congressional Budget Office and the Simcitification of actual government here.

One amusing demonstration of SimCity’s assumptions taken to their logical extremes Magnasanti, the project of architecture student Vincent Ocasla. 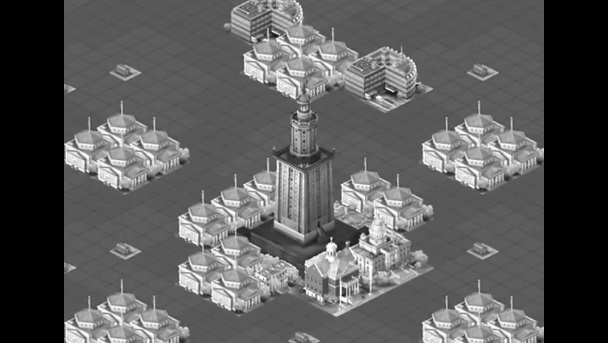 Ocasla spent four years(!) working out the logic of SimCity3000 and “beat” the game by maxing out the population. My favorite quote from Ocasia:

“Technically, no one is leaving or coming into the city. Population growth is stagnant. Sims don’t need to travel long distances, because their workplace is just within walking distance. In fact they do not even need to leave their own block. Wherever they go it’s like going to the same place.”

The fact that SimCity has an embedded logic that players must master in order to acheive their simulation goals isn’t surprising. In fact, this is in my mind, one of the main ways that games create learning environments.

In a game, you get to experience someone else’s assumptions as a complete system. The “learning” then comes from thinking about what those assumptions are and comparing them to your perception of reality and how you think that system *should* work. Game critic and designer Ian Bogost talks about this aspect of games using the visual metaphor of anamorphosis.

The difference between the image you expect to see and the one you do see, helps you to think about your own act of perception and creates the teachable moment.

I wouldn’t hope that playing a game would be a complete educational experience. Rather, playing a game provides the basis for a discussion about the outcomes of the game, and the game dynamics themselves. In what ways does this game approximate real-life? in what ways does it differ? What are the assumptions of the game, do they seem true or false? SimCity creates lots of these moments but doesn’t do much to build in spaces for reflection and critical thinking.

One of the assumptions inherent in a SimCity game is that cities are about balancing metrics and that if these metrics are balanced correctly, your city will grow (an interesting assumption). Players explore assumptions about how municipal budgeting works, what makes a city desirable, and how the parts of a city relate to one another (how does pollution relate to land value? how does land value relate to use? will people avoid living in an area with too many power lines?) but playing the game, if anything, naturalizes these assumptions as inherent city dynamics, and not as the product of human values.

To be fair, later versions of SimCity introduced petitioning residents who periodically ask for certain kinds of services or protest your actions, but these uppity city-dwellers are a kind of obstacle course – appeasing them helps you to remain popular enough to win re-election.

Gilda and I have set out to make a game about city planning that assumes that the act of planning is inherently political, involves stakeholders and competing values. It moves the desires of particular residents to center stage. Our game will still involve assumptions (lots of them!) about how a city works, but we hope to build these into a central, transparent part of the gameplay, affording the players opportunities to think about what “success” in something like a rezoning might mean to different parties. Instead of trying to build the perfect city, zoning is experienced as a negotiation between different interests (with some competing and some complementary goals).

Finally, here’s a link Vincent Ocasla’s YouTube Channel . His original video about Mangnasanti was removed from youtube, and that drama is referenced in comments on the site where you can see another video about building fictitious cyber mega-cities.

Up Next: Actually making a game.