Whose streets? Our Streets! 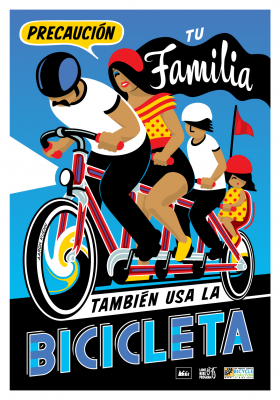 As an LA native I would have never imagined that a bike movement would ever flourish in this city. Not because it’s impossible, but because I never saw a mode of transportation defining who I am as an individual. The automobile has scarred this city’s identity for far too long. Even though many people in Los Angeles walk, bike, and use public transit, it all goes back to the car. The fact that most our of public dollars go towards roads and highways doesn’t help.

In these hard times, even public transit has become expensive for many low-income people– who are turning to bikes as a primary mode of transportation. And as bus service cuts persist, bikes have been become a necessity for many folks, especially at night. Often riding with without a helmet, lights, or reflectors, these bicyclists have some scars—either from being hit by car, or knowing someone who was killed by a car. These bicyclists  don’t all have fancy bikes nor the time to attend a hearing to advocate for more bike lanes or policies that protect them. It didn’t help that many of those active in this thriving bike advocacy movement didn’t look like them—brown, black or poor.

Founded by two women of color, the City of Lights/Ciudad de Luces Program, incubated by the Los Angeles County Bicycle Coalition (LACBC), has been working since 2008 to empower low-income cyclists of color through education and leadership development. What started off as an effort to give out helmets, lights and safety vests at day labor centers across the city, the program evolved into creating a bike repair space, BiciLibre, located in the Westlake neighborhood, and led community meetings to prioritize bike infrastructure in low-income areas as the City of LA drafted a Bike Master Plan. In almost four years, the program has helped serve 600+ low income cyclists, giving another face and voice to our bike movement.  In late 2011, in the spirit of its popular education philosophy, a partnership between the City of Lights, LACBC, the City of LA Department of Transportation (LADOT) and retailer REI helped fund a public education campaign specifically targeted to the Latino community, the first of its kind. The campaign titled, “Precaución: Tu Familia También usa la Bicicleta,” went live this year, reaching a broader audience—beyond the hipster wearing cutoffs with a fixie hanging from his (or her) shoulder.

I would have never thought that bikes would eventually be part of the fabric of our city. Even I’m a believer now.