Water Wars in the Movies 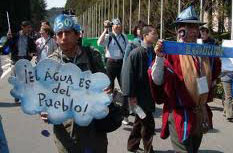 The real world event of what’s been called the Cochabamba Water Wars found its way into two recent feature films.  Cochabamba is the third largest city in Bolivia and in 1999 to 2000, the residents got organized and mobilized to stop a multi-national from privatizing their water. 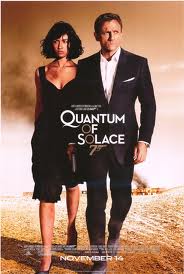 Quantum of Solace released in 2008 is a James Bond, Double-Oh-Seven adventure I saw at the Cinerama Dome with by buddy, fellow mystery writer Bob Ward.  The picture has an exciting car chase for an  opener and Bond’s Bourne Identity-like close hand-to-hand combat scenes are smashing as he might say.  But the main villain in the film, Dominic Greene, is as bland as the white suits he wore.  In fact what I distinctly recall discussing with Bob after the flick was, “Man, what was up with that?  This is the franchise that gave us Goldfinger painting a woman in gold for revenge.  The German-Chinese Dr. No and his kung fu grip mechanical hands.  But Greene.  Really?!”

Anyway, Quantum deals, in part, with the on-the-nose named Greene, a member of the evil Quantum cabal that Bond is chasing down, out to control the water supply in Bolivia through his fake eco-friendly front.  There’s maybe one scene of some indigenous folks lining up for water but mostly Bolivia is represented by the fetching and deadly Bolivian secret agent Camille Montes who has a personal score to settle with her fellow countryman General Medrano, the officer instituting the coup as he’s in the pocket of Greene.  Okay, it’s a Bond film so of course he has to do the heavy lifting, but there’s not even a scene where he leads the roused Bolivian compasinos against Greene’s fortress.  I guess the producers concluded that wouldn’t be PC, the white savior showing up to lead the bedraggled brown folk — what with Bond having to exist as a kind of blunted post-Soviet Union imperialist for her majesty these days.  Or did Bond defeat Greene merely to ensure the proper allied oligarchs would control the water? 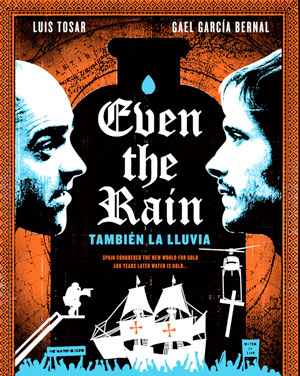 Last year’s Even the Rain, from Spain, shown in the States in art houses and at film festivals, has a lot more depth and verisimilitude going for it than 007’s last outing.  It’s a film within a film set-up and deals with a Spanish film crew arriving in Cochabamba during that fateful time to shoot a lefty film about Christopher Columbus.  Essentially they will show Columbus in a revisionist light as he exploits, enslaves and commits inhuman acts against the indios in the so-called New World – all for their gold and labor.  Indeed the focus of the story’s film is a priest, Bartolomé de las Casas, a cleric who eventually campaigned against the brutal treatment of native people.  Daniel is one of the non-actors the director Sebastian casts for the film for his Indian face and forceful way to play an historical leader named Hatuey, is also an organizer working to stop a multi-national company from privatizing their water.

Daniel is only doing the film for the money to help pay for a pipeline to bring water to the town from the well up in the hills the townspeople, men and women, have dug.  Naturally the big company, headquartered in London and California, having reached an agreement with the powers-that-be, isn’t having any of this individual water business.  That somehow water is a right.  The cops and military are mobilized against the people and when Daniel isn’t playing Hatuey, he’s getting beaten and arrested as the Committee of Water he’s part of conducts mass actions.

In a well-done bit that riffs on the limousine liberals all hot to make their film about exploitation while simultaneously exploiting the locals, Costa, the hard driving producer is on his cell talking to one of his financiers.  He’s bragging in English how they’ve got the extras working for chump change.  Daniel is in earshot but the producer figures he doesn’t speak English.  Only he does, having worked construction in the States for a couple of years.

“We got them for two dollars a day, it’s fucking great, man” Daniel mocks Costa with his words.

In Even the Rain’s key scene, 13 indigenous people, a wretched irony of Christ and his apostles, are the be burned at the stake, strapped to crosses, for daring to attempt to free their people.  As de las Casas protests, Hatuey and the others are set afire.  The Indians chant his name over and over and Sebastián, on a hill filming this is caught up and chants his name too.  He comes to his senses and yells ‘Cut.”  Daniel as Hatuey is handed a bottle of water to quench his thirst as the law arrives.  See Costa and Sebastian, not without some consternation, made a deal to turn the firebrand back over to the cops after this scene – having to bail him out.  Though they’d rationalized he could slip him away before that.  But the extras rise up and overturn the police SUV and Daniel runs away.

Costa starts out as the prick of a producer and Sebastián the good-hearted artist.  Their personalities become fluid and they change places psychologically as matters progress.  Costa in the climax has to do the right thing and Sebastián becomes the all-consumed movie maker who must finish his project at any cost.  Like director-writer Sam Peckinpah on the set of his fabled damned near doomed film Major Dundee, itself a story about characters on a lost quest, Sebastián is madly driven to get his film completed.

Written by Paul Laverty and directed by Icíar Bollaín, Even the Rain is not without its faults.  There some dialogue describing the protestors burning their water bills yet that wasn’t shown.  There’s also too much schmaltz toward the end for my tastes but at least not as overdone as it was in one of Laverty’s other films, Bread and Roses, directed by his frequent collaborator Ken Loach, set in L.A. inspired by the Justice for Janitors campaign.  Props too for my man Luis Tosar who played Costa.  He played his role with the proper conflicted nuance and I’m sure he had a better time doing this than say his turn in the pedestrian big screen Miami Vice movie from a few years back based on the swingin’ ‘80s TV show where he got to be…wait for it…a drug lord.

But maybe as Even the Rain warns, the new kingpins will seek to control the pipeline not of that which enslaves the body, but that which provides the most basic substance to the body.  They will try and horde even the rain.  But that would also mean the people would resist.  The cry would surely go up as it did in the film: ”What do we want?  Water.  When do we want it?  Now!”