Waiting for the Big One 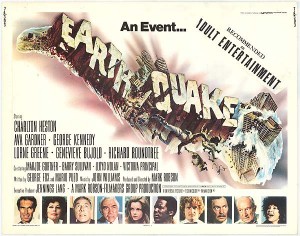 I was once asked by a book editor to come up with an outline for a novel set in a slightly futurized Los Angeles.  It was obvious to me that any novel I’d outline about a future L.A. would naturally be set after the Big One hit.  As an L.A. native I’ve come through several earthquakes.  In the ‘70s in high school I even stayed in bed half dozing as one rocked our house in South Central.  In ‘94, Dr. Pop and I rushed out of bed to grab our then small children and get downstairs under an archway during the Northridge quake.  So I was somewhat blasé about earthquakes as I suppose many Californians get.

I’d seen the ‘70s disaster film Earthquake all about a cast of stars led by Charlton Heston (before he was president of the National Rifle Association) who cope before and after a huge quake destroys L.A.  There was the film Escape from Los Angeles where a devastating earthquake had separated a large swath of the Southland from the mainland, and Los Angeles Island is a massive prison.  In 2012, the 2009 movie, the Mayan calendar is realized – or maybe it has something to do with the Earth’s core melting — and pretty much the world is destroyed yet somehow John Cusack drives through the mother of all earthquakes in L.A. in the limousine he drives for a living with his family.  There’s also the science fiction novel Lucifer’s Hammer where a massive tsunami wipes out parts of the Southland after chunks of a comet strike the Earth.

But this was before Haiti and Japan and the point reiterated that earthquakes are not a plot device, but have real and fatal impacts.

In California we have among several such entities the California Emergency Management Agency.  I presume this is an amalgam of older agencies as a cursory look at their website has Homeland Security as one of their divisions, though given the latter is a federal agency, I guess that’s just shorthand for navigation purposes.  There are posts on the site’s homepage about tsunami warnings and not to panic about radiation leakage from the Fukushima Nuclear Power plant given there’s been a run on potassium iodine tablets.

A further check on the internet brings up earthquake tip sheets including Tips for the Elderly.  Having just gone though for the first time a bout of sciatica (when I was a kid I’d laugh at the old men, men my age now, who complained in some Jack Benny comedy, “Oh, my aching sciatica.”  Comedy writers are cruel.) that for a month kept me standing any length of time or from walking less than two blocks least that pinched nerve make my leg throb, I read with interest the advice on the elderly sheet that if you’re standing duck and cover or sit down otherwise you could be thrown to the floor.

The duck and cover advice reminded me that post the earthquake in the northern part of Japan, advice went back and forth in my emails about should you or should you not get in a doorway.  during a quake.  One of these emails from someone I knew was supposedly passed along by an “expert” who claimed that you shouldn’t be in a doorway as this could collapse and fall on you.  That it was better to curl up in a ball next to a couch or something big like that to partially protect you from debris which could very well be flung about.  For the record, the FEMA site states this:  Use a doorway for shelter only if it is in close proximity to you and if you know it is a strongly supported, loadbearing doorway.

I’m not sure which are or are not loadbearing doorways in our house, but I do take seriously getting an earthquake kit together and being prepared when the Big One hits.