A piece of my heart will always live in Glasgow. It is a city of incredible warmth and beauty and humour, one that welcomed me when I was sad and tired and burned out from years of work in LA. I worked in a shop where we took pride in what we did and the managers would stand up for staff against bullying customers, something utterly unknown in all of my years experience working for minimum wage. With a single question to start them off, cabbies would break down the privitisation and development of the parks or public housing in the wee hours of the morning. I remember walking the city with Bob, who could tell me the radical history of every building we passed. He also told me once that for an artist there never was a colour to equal the glorious colour of a tube of vermilion paint under Thatcher. As though Thatcher, and all who have followed her, crafted a world where the poor live in shadows and shades of gray, and it remains to us to fight for vermilion.

For a writer? The Scottish use of language is pure dead glorious. Like my beloved Spanglish, it twists English into its own cadences and rhythms, and is full of words that I have never heard the like of. Both of them are languages of resistance in their power and playfulness and refusal to bow to a dominant grammar.

Small wonder that the history should match the rest, or better said, small wonder that I should love it so, shaped by history as it is. A history that human beings have taken into their hands to wrestle into shape, to wrest from it some kind of justice for themselves, their families, and their communities.

What is Red Clydeside? A city in revolt. Known principally as a primarily socialist uprising of workers during World War I, my own favourite stories are those of the women. With the influx of workers to the munitions plants, many landlords saw the opportunity to profit from the war and drastically raise rents. A spate of evictions followed, and owners also confiscated possessions to cover arrears. Business has always been business for business people.

In 1914, Independent Labour Party (ILP) councillor Andrew McBride, and Women’s Labour League president Mary Laird, formed the Glasgow Women’s Housing Association. It was Mary Barbour, however, who made of it a movement of active resistence, forming the South Govan Women’s Housing Association in June of 1915. The third child of seven, she had worked as a thread twister and carpet printer, and been part of the Kinning Park Co-operative Guild. The South Govan Housing Association worked through a collection of committees, physically preventing evictions and ‘hounding’ the Sheriff’s officers. I’m not entirely sure what this hounding consisted of, but knowing the proud women of Glasgow as I do, I can testify that it was without doubt both terrifying and effective.

Govan proved to be an inspiration quickly taken up by all of Clydeside, with evictions everywhere being forcibly resisted. The rent strike commenced. The Independant Labour Party and the Labour Unions came to the support of the women in demanding not simply a moratorium on rent increases, but the building of social housing, this is what solidarity looks like (if nothing else, just read the top paragraph of the second column): 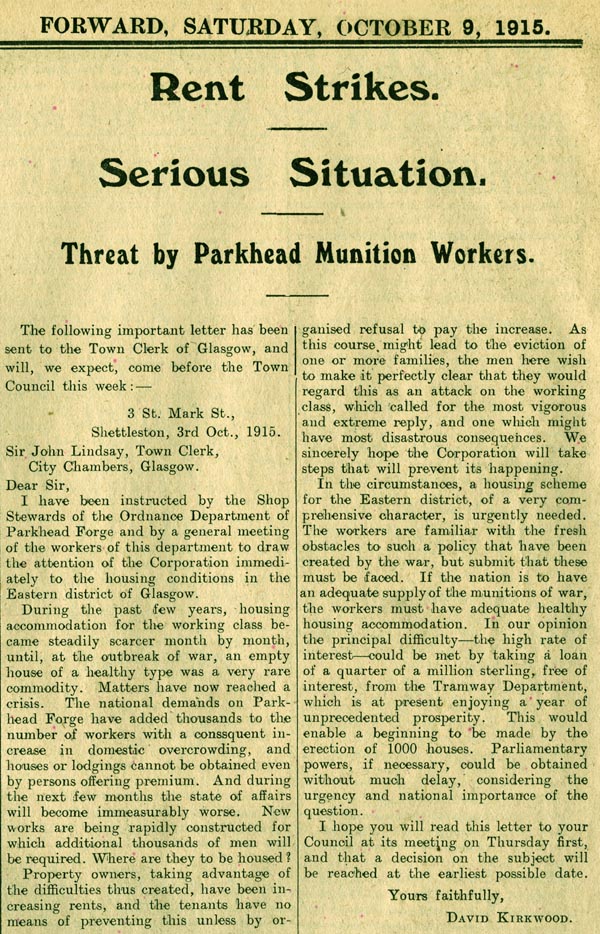 With the grassroots women’s associations, supported by the ILP and the unions, 20,000 tenants were refusing to pay rent by November of 1915. 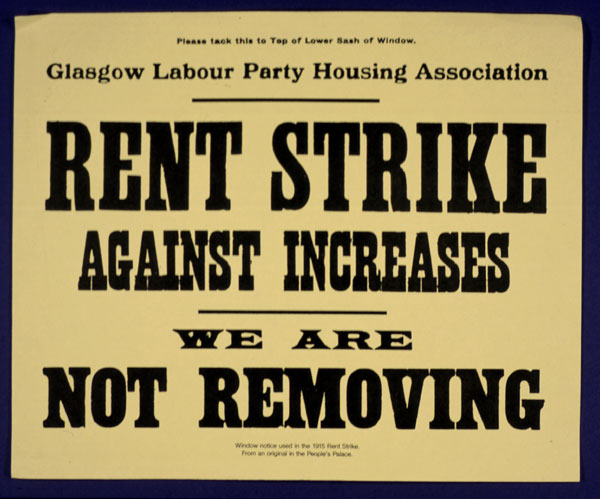 On November 17th, thousands of angry women (nicknamed Mrs Barbour’s Army), along with shipyard workers and engineers, arrived at the Sheriff’s courts in Central Glasgow. I wish I could have been there. By December legislation had been passed not just to freeze rents, but to return them to pre-war levels.

The story doesn’t stop there of course, but my telling of it does. I was trying to find words from Mrs. Barbour herself, but in their absence, these will do, spoken by John MacClean from the dock, on trial for sedition in 1918:

For the full period of my active life I have been a teacher of economics to the working classes, and my contention has always been that capitalism is rotten to its foundations, and must give place to a new society.

No human being on the face of the earth, no government is going to take from me my right to speak, my right to protest against wrong, my right to do everything that is for the benefit of mankind.