It’s funny that I remember the L.A. riots clearly, but I don’t remember them when they happened in April 1992…not at all. I was in Tucson, and in high school. Back in my old house in the desert we didn’t watch much television, and definitely not the news. I didn’t read the paper. I didn’t have a computer.

Looking back, that in itself is almost inconceivable.

I must have heard about it, we must have brought it up in a class or friends talking around the lunch table. But I don’t remember. I had just hurt both my legs badly playing soccer, and was focused on doing well in school so I could get the hell out of Tucson and that’s what I remember. But Los Angeles? Los Angeles meant a lot of things to me, but it mostly meant the film Stand and Deliver, which I feel like I must have been made to watch about a hundred times in Junior High (though it might have been only two or three). 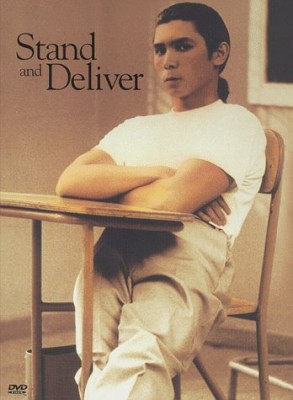 I didn’t mind because it meant Lou Diamond Phillips who I had a mad crush on at age 13. It also meant this lesson drummed into us over and over again: school is how you get out of poverty and yes, you can do it, you can even do calculus (I couldn’t really do calculus). Looking back a lot of other things overshadowed that message for a lot of people.  Like reality.

Now I would prefer a message that all of us need to come out of poverty together through social change, not by sling-shotting individuals out through education. But it’s still a great film, and I still have a crush on Lou Diamond Phillips. It’s a fact that nerdy white kids like me and my brothers didn’t have any real troubles with the life (because we weren’t cool enough for it and we lived too far out) despite the side of town we lived on, but Tucson had its gangs and everyone wanted to be hard like those kids in East LA, everyone had family or stories from L.A. That was the place to be.  And yeah, I had my phase of loving classic cars and listening to the Penguins and Brenton Wood and the Art Laboe show, broadcasting direct from L.A. I haven’t quite left it.

My memory of the riots comes from someone else, I’m not even sure of his name. It was a couple of years later and I was working for the summer at a pizza place right near the res when he started working there. He was real big, and all tatted up. Those tats right up the neck were still uncommon, so we were all curious and of course he came from L.A. because no one in Tucson looked like that yet. He didn’t talk much, I remember him being very quiet, and just going about his work. But one night over a break when no customers were in he did, just a little. A little about how he’d wanted to leave the life, and to get out he had to get out of L.A. too. So he’d come to stay with family and get a new start. And he said a little about the riots, the fires and the looting and the madness. He didn’t think it was cool at all, but even as he spoke about terrible things he had a matter-of-factness about him. We thought that was totally cool. I understand that thought better now, but back then when we listened to him, I’m pretty sure that everyone else was feeling just a little jealous like me that we had never experienced anything like that. L.A. was still the place to be in that world we were in.

It’s impossible really, to remember how you felt in the past because it tends to mix up with how you feel in the present, how you thought you felt or wanted to feel. I felt a mix of things, that was for sure, and mostly fear and disapproval, because I had already seen enough violence to hate it. But that’s not all. It took me a while I think to come to terms with just how angry I was about growing up poor, even though I loved so much of my childhood. It’s like I built up a reservoir from every time someone made fun of my clothes or talked down to me, from when I couldn’t have what other kids had, when mom had to deal with creditors on the phone, when I couldn’t go places with my friends, when we lost our house. So I found the anger a little understandable and exciting too. I might not remember much of what he said, but I remember that excitement.

It’s funny I ended up in L.A. after all that, not because I wanted to, but by pure chance. I remember my ex pointing out the corner where they had parked a tank in Echo Park. It took a while for L.A. to move from myth to reality in my head really, and now it means so much more to me, but these two themes remain: it is the pinnacle of a certain kind of West Coast cool I think, and it is violent. Now I know the great love and struggle that is there, the violence hurts all the more in spite of a deeper understanding not just of the anger but the underlying reasons for that anger.

The other outstanding memory from that pizza place, the worst workplace I’ve ever had by the way, was my friend Rachel playing this song on the jukebox on many a night after we had shut, her favorite song and a beautiful one to remember all those we have lost to places like L.A. and the anger and eruptions that they are capable of bringing to life: