Too Big to Fail? 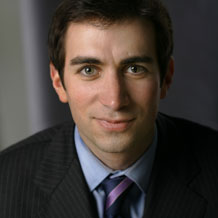 Andrew Ross Sorkin just wrote a book called Too Big to Fail. That phrase refers to institutions and the idea that by getting bigger and merging with others, institutions can escape their vulnerability. The economic crisis proved that all wrong of course…except they did get bailed out and they’re all still around but one. So maybe not. Still, the book, and the talk, was much more about the people. The talk was quite juicy in fact. So what surprised Sorkin most in his research, as the chief mergers and acquisitions reporter for the New York Times?

Did you know? Certain people really did see this coming. Everyone, including the Treasury, knew Lehman was shaky months beforehand, not to mention AIG and Merrill Lynch. So instead of being about five to six days in September as originally planned, the book starts back in March.

Did you know? Goldman Sachs had an annual board meeting in Russia, and Henry Paulson, Secretary of the Treasury, and former Goldman Sachs CEO, just happened to be there? They all had a nice social and un-calendered breakfast. They said no business was discussed.

And you’ll never guess some of the naughty things that were said. I even learned a new term for getting screwed. (to protect the sensitive, really wierd profanity omitted.  for the real deal contact Andrea directly)

And it’s fascinating this world of corporate helicopter commutes, chartered jets to travel the country, chauffeured town-cars. This world of town homes and country homes and fancy dinners at the best restaurants. These folks never have to interact with anyone outside the circle. It’s a fairy tale world where nothing else seems to have any reality.

Even sadder was how tight and incestuous this circle was (and continues to be), and how cut-throat. They couldn’t even pull together to save themselves. People in government like Hank Paulson, with the capacity to think of things beyond shareholders, had to force survival down their throats. Paulson had to take out a couple of members of the circle, and he did it ruthlessly. They thought it best to merge a couple members of the circle, they did that do. And I wondered just where the power came from allowing him (and the Federal Reserve and the FDIC) to give those kind of orders. And how they equated their circle’s survival with that of America.

That just might be the heart of the problem. The power of this idea that saving a group of institutions that had really fucked up to the tune of billions of dollars, just so they could return to business as usual immediately after, was the patriotic thing to do. That our democracy is tied to the stock market. That we absolutely must run our economy on this kind of engine. And every time it goes into crisis, which it does regularly, we must hold our noses and violate our free market principles and save it. Is this logic really the best we can do?

The most telling thing I think, is that according to Sorkin, most of the people in power in these companies (same group of people as before of course) refer to themselves as survivors.

As though they’d survived some kind of cancer rather than being rescued.

And maybe that’s due partly to the insanity of a market that depends primarily on confidence.

But I think we all know it goes a lot deeper than that.

No one agrees more than Senator Bernie Sanders whose 2-page “Too Big To Fail, Too Big to Exist Act” would break up some of the world’s biggest banks, and is being discussed in Congress as I write.

Here is Senator Sanders on the bill and why the U.S. shouldn’t follow the bath of England and Europe.

Here is an excerpt from Sorkin’s book printed in this month’s Vanity Fair.

Click here to get to Sorkin’s collection of original documents and emails.  I encourage you to check them out.

And here is a video of Sorkin talking about the crafting of a book, which he says is “written like a mystery, even though we all know how the story ends.”