Thoughts on the Chicago Skyline

Downtown Chicago is all planes and angles, contrasts in brick and stone, glass and steel. It is full of amazing reflections in glass. 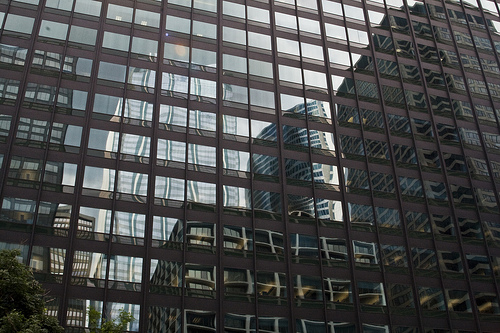 You see it at one level from the street, and another entirely from the El train, and from both it is visually spectacular. Your fingers itch for your camera, every step brings a shift in the lines, and changes the seen and the unseen.

I had half a day on Monday after a morning meeting, so I thought I’d do the Architectural Boat Tour, 90 minutes along the river and almost all the pictures a lustful heart could ask for…as the river goes round the loop and not through it.

But I confess my extreme love for these great buildings piled one on top of the other sits miserably with my love of social and environmental justice. They are contradictions impossible to overcome. I wonder if perhaps I love them (and hate them) for their colossal and unbelievable arrogance, because it is combined with such extraordinary technical and engineering skill. I love the fact that we have figured out how to build such things, hurling metal and glass up to the sky. I suppose we never stopped to ask whether we should. And the wealth required to build such buildings…where does it come from? Chicago is as much a city of immense poverty as it is a city of beauty. And that is where you find the answer. My question is whether we could build such things without exploitation, and in a way that sits happily on the earth.

On the tour, the guide was full of information on architectural styles and the men who created them, the requirements of building something like the Sears tower, the Trump tower, and towers x, y, and z. Everything was entirely divorced from the city or the people who live in it with the exception of a single architect, Bertrand Goldberg. He designed Marina City, which I love.

I have always loved round buildings. But the guide explained that he also tried to design buildings to create community, to encourage contact between neighbors, to provide immediate access to life’s amenities. Another of his buildings is River City.

These buildings are all mixed use, with stores, child care, and access to a marina beneath. The balconies  are close together to bring neighbors together. They have beautiful public spaces. He believed density was a good thing, for community, for creativity, for life. And so I looked him up. And I’m not sure what I think of him, I certainly disagree with much of what he says, but he makes me think. He wrote this of Marina City:

More importantly, in the Marina City forms. I made it possible for people to participate in community formation. Both in the use of space and in the form of space I discovered that behavior can be influenced by the shape of space. The faceless anonymity of the corporate box which we had used for the buildings for our government, our health, our education, our business and our living, I discovered could be replaced more effectively by a new development of architectural structure and forms that supported its use by people. We could have both architecture and humanism just as we had begun to do 200 years before in the social revolutions of the 18th and 19th centuries.

I love this recognition of the influence of space on the individual and community, and the revolutionary idea that architecture should be for the people and how they will live within it. That it affects how our society lives and grows. He’s not the only one of course, but one of the few. Yet it is a typical liberalism, looking backward to some better time, and only as worthy as it can be without questioning a terribly unjust world. He wrote another speech that offers an interesting reflection on the thoughts above called Rich is Right…exposing all of the contradictions involved in his thinking.

Ah, if only that were true. Are the rich ever right? I don’t really think so. Our homeless population and slum housing certainly proves otherwise. But it is true that architects have always worked for the rich. I do like such frank admissions. But that leads to the conclusion that the 90% of Americans who are not rich just have to hope that those 10% of quixotic and self-absorbed rich people at some point get it right, no? That seems to require a lot of faith that history has never ever justified.

He goes on, extraordinarily enough, to quote Albert Speer, architect of Hitler. I read Speer’s autobiography some years ago and found it fascinating. He did not just build buildings, he created drama and spectacle, he cemented the image of ultimate power in the minds of the observer. Whenever you see Hitler speaking on a stage with the colossal architecture, the huge backdrops of red banners and striking black swastikas, the eagles, the torches… Speer designed all of that.

Albert Speer- Hitler’s state architect said: “We must learn to master technology and its potential by political means.” In contrast, modern architects of the 19th century all saw architecture as a reform mechanism for politics: that is, for helping solve social problems rooted in urban life and community needs, and for devising improved ways for people to work and learn and grow together.

It seems to me that my Chicago  boat tour proved Speer’s point, that architecture reflects the landscape of political power, and it has been mastered by the Trumps of the world. It is a skyline of corporations, not of government, ideals, or community spaces. Bertrand was alone there in thinking about these things, his buildings stand out because of it.

And they are busy building luxury residences for people who don’t exist. Home sales in Chicago’s metropolitan area are down 27.5% from April 2008, and unemployment is up to 10.1% according to the Illinois Association of Realtors. And they have somehow decided that these condos count as affordable housing and are asking for help:

David Hanna, president of the Chicago Association of REALTORS®, says: “The city of Chicago condominium sales numbers continue to reflect a critical need for governmental agencies to review the growing disparity in the ability to finance a condominium purchase in the city. This affordable housing will become unaffordable and unattainable to many qualified first-time homebuyers in the city of Chicago unless existing federal guidelines, which do not take into account nuances of the local market, are modified.”

If they did build affordable condos, I’m sure they wouldn’t be having quite so much trouble…I like to imagine what our cities would look like if they were built for all of the city’s people. Because, I do agree with this final quote from Bertrand Goldberg:

Are cities in our blood?

Are cities the natural forms of shelter which men build for themselves? Like the spider his web, or the oyster his shell? The answer to this is uncertain, but I believe it to be – yea.

I love the city.