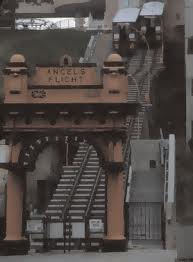 I believe as I’ve mentioned previously, I’m not that into public spaces, though I have nothing against them personally.  But there is one such public space I dig, and at least sporadically, have enjoyed over time; the Grand Performances series which have taken place for some 24 years.  This has been a publicly and privately funded nonprofit enterprise bringing music and other arts for free to the downtown L.A. venue of the Water Court at the California Plaza.

Ordinarily the plaza is an open air dining and coffee drinking space set on a tier, that is you can park underneath or walk up to its plateau fronting an elevated Grand Avenue from lower Olive Street on its eastern side, where the plaza is set among massive office towers and the Omni Hotel.  Across Olive is the apex of Angel’s Flight, a funicular rail that goes up and down a short run of Bunker Hill.  Angel’s Flight (having re-opened recently after being shut down for a decade in the wake of a fatal accident) has been seen in noir films such as the lurid ‘50s masterpiece Kiss Me Deadly with Ralph Meeker as the best Mike Hammer ever, to the recent Our Family’s Wedding, a comedy about the misadventures of an African-American groom and his Mexican-American bride and their respective soon to be in-laws.

Back to Grand Performances.  Over the years a broad range of sound and visuals have been on tap at this space from the retro lounge/world beat band Pink Martini, the Guangdong Modern Dance Company, the Watts Prophets, the spoken word progenitors who came out o the Watts riots of ’65, the music of Battlestar Galactica (and this is not the time to delineate the current incarnation of Battlestar and its Caprica offspring on cable, but suffice it to say this sci-fi epic ain’t your daddy’s ‘80s Battlestar helmed by Bonanza’s Lorne Greene on network TV), the Dakah Hip Hop Orchestra, to the silent film, La Passion de Jeanne D’Arc with a live score accompanying it featuring strings and a choir.

The good doctor and I happily caught two groups performing the other Friday night.  The first act was  Bassekou Kouyate and Ngoni Ba and the second band was Dengue Fever.  The first group was a Mali band headed by this cat, Bassekou Kouyate, who plays the ngoni — a lute said to be the ancestor to the banjo slaves in the U.S. created — like John Lee Hooker crossed with Jimi Hendrix.  Ngoni Ba apparently means the Big Ngoni and his band, fronted by his wife, lead singer Ami Sacko, the “Tina Turner of Mali,” tore it up on what seemed to me was an amalgam of Malian rhythms and beats infused with the Delta Blues.

Dengue Fever I’d been hoping to see for some time as I’d first heard their music on an in-studio gig they did on KCRW’s Morning Becomes Eclectic.  Dengue is an L.A.-based band that blends what they say is psychedelic rock with Cambodian pop music and lyrics.  Maybe touring has mellowed the band some as their sound to us had more of a jazz-rock/fusion flavor Friday night while lead singer Chhom Nimol belted out the tunes.  She’s one of those petite women like Christina Aguilera who has a hell of a set of pipes.  I have no idea what any of the songs she sang meant, but she and the band rocked the house.

There’s an annual Central Avenue Jazz Festival in South Central L.A. where singer Ernie Andrews, one of the last of the old schoolers, still performs.  The Santa Monica Pier has a free music series and the likes of Natacha Atlas have done free performances at the Getty.

I don’t know if a people’s music, subsidized music let’s say, breaks down cultural and racial barriers, but anything that gets people out to groove is a cool thing.

The revolution may not be televised, but it’s got to have a soundtrack.