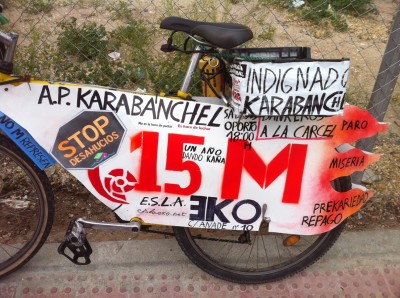 My son Nelson has been studying at the Univerisdad Complutense, the largest public university in Spain with 75,000 students. He has been in Madrid since October of 2011 enrolled in a University that was founded in the 13th Century. My wife and I decided to spend a month in Madrid visiting him and his girlfriend Sarah Ribbers. Life comes full circle when your children start to take care of you. Nelson has mastered Castellano and he knows Madrid inside out so he was our caretaker and guide to the sights and the Tapas bars!

It was a long overdue and much deserved holiday, but I could not resist taking part in a home defense in the working class neighborhood of Carbanchel. Early on a weekday morning the barrio committee of “Los Indignados”, Spain’s version of Occupy that kicked off on May 15th of 2011, gathered a crowd to defend the home of Vicente a 73 year old man facing eviction at the hands of Citibank. Posters and signs covered the walls of his building, and Vicente’s grandson leaned out of the window of his condominium shouting support. The chants that pierced the cool morning air were familiar to anyone in the USA who has participated in foreclosure fighting. The action was successful and well covered in Spain’s major newspaper, El Pais. Vincent was able to keep possession of his home. These types of neighborhood actions are a daily occurrence throughout Spain. Usually they are successful although they have been met with violent police repression in some regions. The website  –– is a great resource to track actions in Spain and the development of the movement to Stop Desahucios (Evictions).

Here is a short video of the action:

This kind of adversarial action has been the story of my life  in the trade union movement. I have dedicated 40 years of my life to organizing and strengthening trade unions in the United States as a means to improve the lives of workers in the context of building a broader revolutionary movement for radical social change. I have always maintained that workers need unions to battle the boss to improve their wages, hours and conditions.  Therefore I approached my visit to Mondragon, the largest worker owned worker run cooperative in the world with great interest and a good deal of skepticism.

Mondragon is a small town of 20,000 nestled in the Basque region equidistant from the two port cities of San Sebastian and Bilbao. Since the 1940’s Mondragon has been the home base for an experiment in worker management. This is not a neighborhood food cooperative or a boutique bakery, but rather a multifaceted enterprise employing 93,000 people. Mondragon is the umbrella for the largest company in the Basque region and the 7th largest company in all of Spain. Mondragon operates a large retail supermarket chain Eroski, a social service provider Lagun Aro, heavy industrial manufacturing and a savings bank, the Caja Laboral. The Universidad de Mondragon graduates scientists and engineers and managers many of whom become part of the cooperative.

Mikel Lezamiz, Mondragon’s director of Co-operative Dissemination and my guide explained that the Cooperative had capped the manager to worker pay ratio at 9 to 1! The CEO of the cooperative’s bank, Caja Laboral only earns 7 times the salary of the cleaning lady. He then took me to a factory that manufactures washing machines under the brand name, Fagor. I watched giant metal stamping presses shaping the tubs for the washers. I realized that I was in the midst of something very significant on a scale that I could not have imagined existed in a capitalist world, owned and managed by the workers .

Spain is experiencing a huge housing construction bust after an intensive speculative boom. Obviously the demand for washing machines has dipped drastically. The workface voted in general assembly to do job sharing to avoid layoffs and the worker assembly voted to take a 7% pay cut up and down the employment ladder to preserve the vitality of the enterprise.  What then is the role for unions, if any,  if the workers make decisions about their work lives and elect their managers? Mikel explained that while workers are welcome to join any of Spain’s many trade union federations, very few Mondragon workers do.

I left Mondragon intrigued and interested in this mode of industrial organization and control that was an affront to many of my guiding paradigms. I had viewed cooperatives as small scale boutiques that could never reach the scale necessary to transform the lives of workers and whole communities. Often in the USA worker ownership is associated with lemon socialism, workers giving up their life savings to rescue an unfeasible manufacturing concern in the rust belt. Now I was confronted with a living breathing example of a different model.  I now need to reflect, read and learn more about Mondragon and its applicability to our reality.