This past May it was my distinct honor and pleasure to be part of the NYC Delegation to Spain,  a group of 20 (mostly) New York City-based organizers, activists, and journalists on a life-changing visit with our Spanish counterparts who are active participants in the movements that, among other things, brought leftists to power in Madrid, Barcelona, and several other cities in the Spanish municipal elections of May 24.

This moment, often referred to as Spain’s Democratic Uprising,  is the result of many loosely aligned and networked political and social expressions, not the least of which are the social centers — the self-managed spaces and places where autonomous culture is created and that operate according to principles of mutual aid, solidarity and cooperation. Some of these spaces are squatted or occupied, some are rented, and all, in diverse ways, exist as both resources and destinations where ideas and projects are shared, invented, and supported.

The idea of movement centers – of physical homes for social movements — has been a preoccupation of mine for a few decades, ever since my first introduction to the history and legacy of the Highlander Center, my role in co-creating the Marrowbone La Mazorca cooperative, the early days of “SAJE House” — the original West Adams home of Strategic Actions for A Just Economy where I worked for about 15 years — the 1995 occupation of the Emergency Resources Unit of the Conservation Corps which for a brief time operated as the Peace and Justice Center, which, in turn, inspired the idea of a SAJE House — and the manner in which the UCLA Downtown Labor Center struggles to walk the difficult line of serving emerging movement projects, the many diverse gatherings that seed them, and the university at the same time. 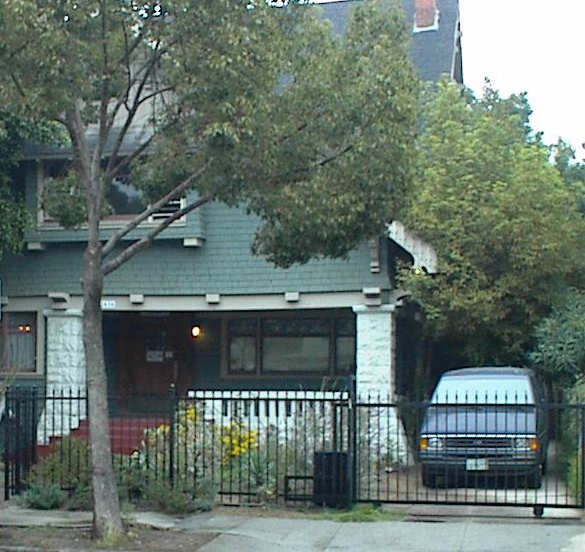 What is different about the social centers in Spain and some of the above stories is the absence of the often inevitable and ever-looming “non-profit industrial complex”, which, typically in the U.S., along with resources and a certain kind of capacity also brings a bundle of assumptions, requirements and lines of accountability that are frequently at odds with the building blocks of the broad-based, collective political imagination and relationships that we desire and need to produce social change.

While the social centers are diverse, they share some things in common. They are places where all kinds of different people gather; where services are delivered outside the traditional client-expert model; where in addition to resources comes a shared understanding that others “have your back”; where the personnel are typically volunteers and financial support for expenses comes from individual members, monthly sustainers, events, and often a bar that is part of the center itself.

As is often a best case scenario, I learned and continue to learn as much from my fellow NYC Delegation to Spain travelers as I did and do continue to learn from the people and places that we visited. Much of what follows was presented as part of a report-back by the Delegation to about 100 people at the Murphy Institute in New York a few weeks ago, specifically the portion about movement centers presented by Lucas Shapiro (who spearheaded the delegation, is a co-founder of MayDay Space in Brooklyn, and who is the one person who might be even more obsessed with this topic than I) and Jessica Powers (whose secret powers lie in the arena of food justice).  Many of the  photographs were taken by the amazing Robert Pluma who managed to document our trip; to do that in a consistently unobtrusive manner; all while carrying a ton of equipment on his back.

Lucas explained that at Patio Maravillas “There are fundraisers every week. The money from the bar supports different community organizations.  It is a meeting place for the PAH” (The Platform for People Affected by Mortgages –a self-managed organization that started in Barcelona, spread across the country, and fights against evictions, displacement, foreclosures – more about their inspiring organizing model in a later post).  Patio Maravillas, is also self-managed, doesn’t have professional staff, and serves as a building block for autonomous culture.  (Note: for those of you who can’t wait to learn more about the PAH and why so many of us find them so inspiring, check out the free documentary Seven Days at PAH Barcelona.) 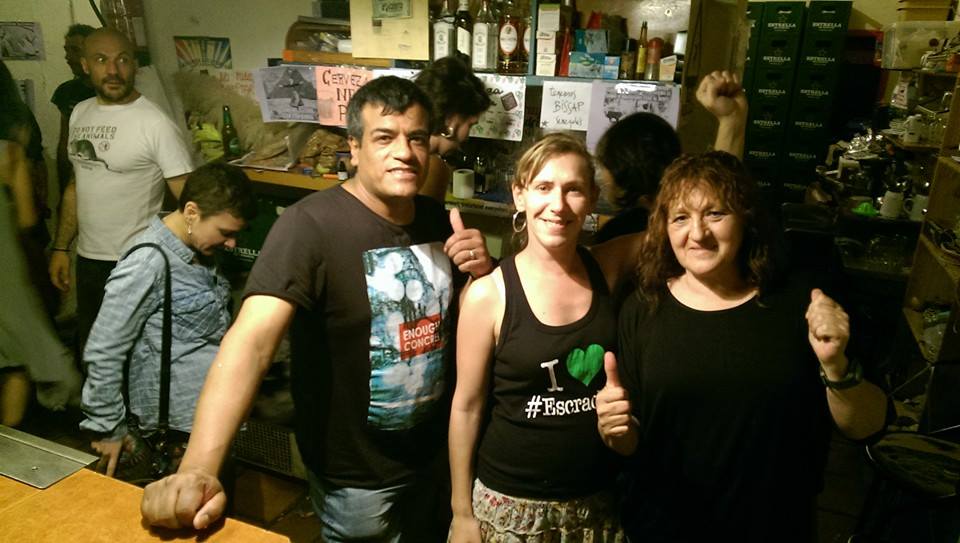 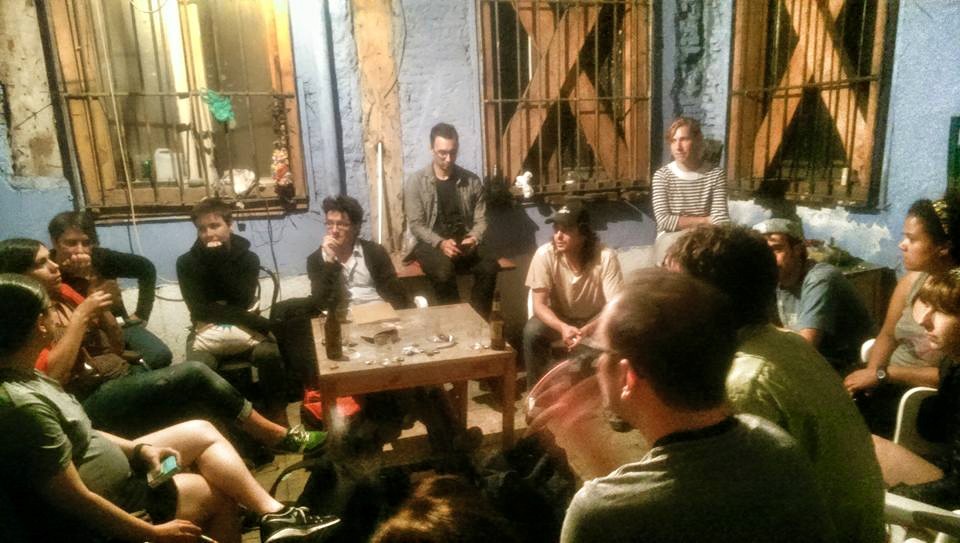 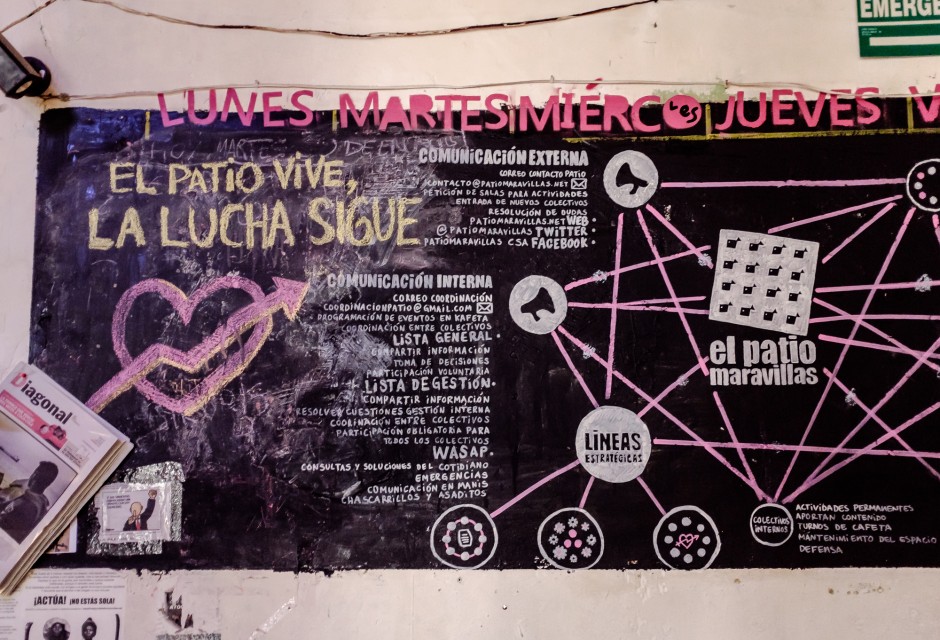 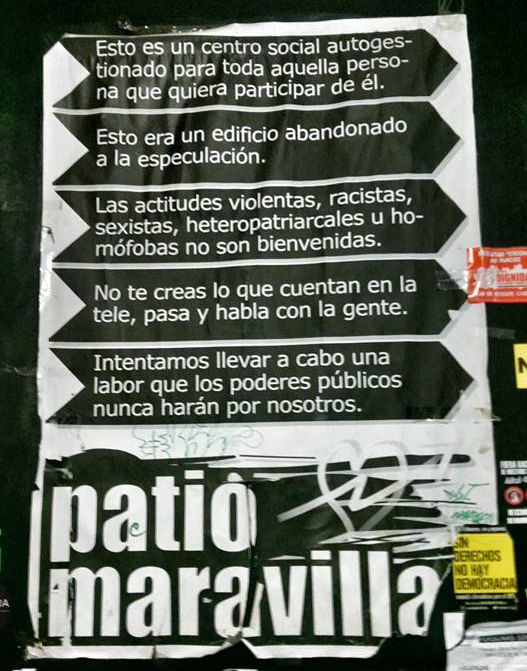 “…breaking it down” [Lucas Shapiro]

Here is a translation of the Patio Maravillas poster on the left:

This was an abandoned building left to speculation

Violent racist sexist heteropatriarchal or homophobic attitudes are not welcome.

Don’t believe what is said on TV, mingle and talk with people.

Located in a working class neighborhood of Madrid, La Villana de Vallekas (the Villainess of Vallekas) is a “social center that fights for the rights of all, for democracy worthy of the name.” It is also the meeting place for the local PAH. 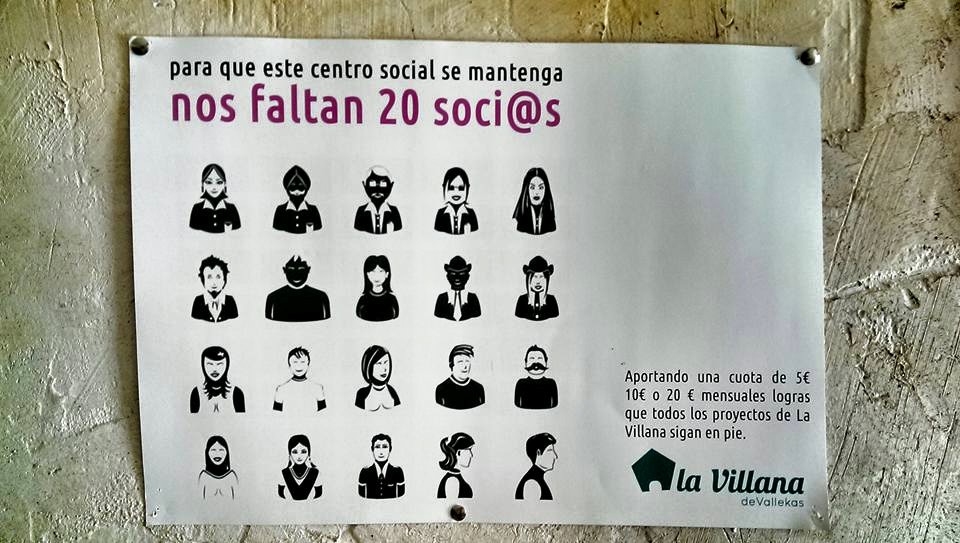 “In order to maintain this social center, we are missing 20 members…By contributing 10 or 20 euros a month you can ensure that all the Villana de Vallekas projects will continue…”

In the NY report-back, Lucas describes La Tabacalera: “It’s a huge old tobacco factory in Madrid that the city wanted to turn into a museum, but because of the financial crisis they ended up negotiating with a collective of artists and activists who turned it into an alternative universe. All kinds of organizations are using the space.” 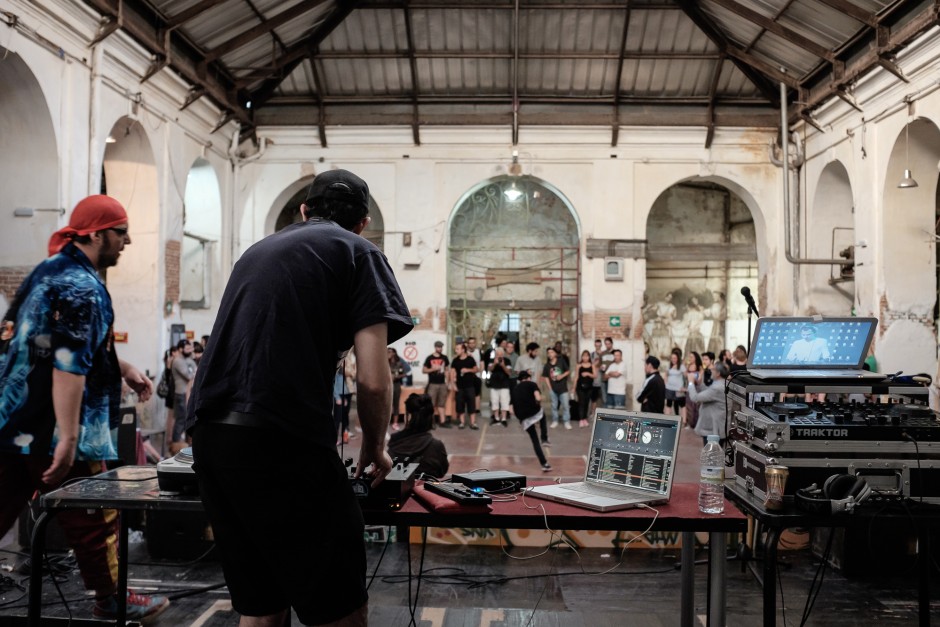 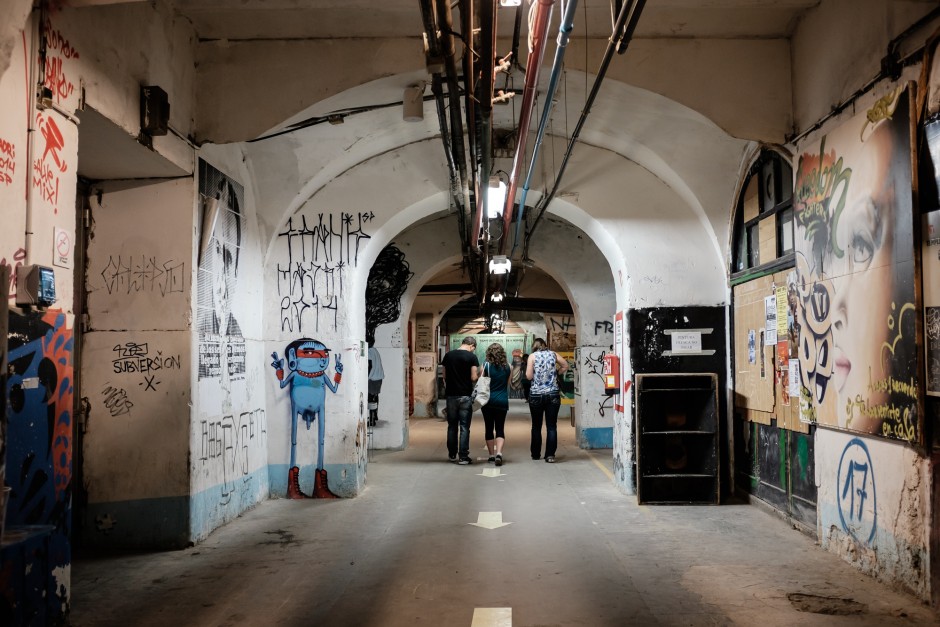 In Barcelona, we got to visit Can Batlló, which consists of a whole series of factory buildings in La Bordeta, a formerly industrial neighborhood. The “tic tac” on their logo refers to the timer tactic that the community used in their take-over campaign.  The buildings consist of abandoned textile factories that the city had promised to improve and then open up to the neighborhood. As the years passed and those promises remained unkept, in 2011, neighborhood people organized “Plataforma Can Batlló” as a set of demands and announced that if the city didn’t start work on the site within 200 days, they would occupy the site and start running it themselves.  And so it went. At the last minute, the city negotiated with the community and began and continues to pay for the upkeep of the site, while the community runs it and continues its vigilant oversight to ensure that the city makes good on plans for affordable housing, neighborhood facilities and green space. Meanwhile, the neighborhood operates the site’s “Bloc Eleven” which includes a library, meeting spaces, an auditorium, a bar, performances, workshops, exhibitions and more. Our charming, exuberant guide pictured below reminded me of an anarchist Santa Claus. 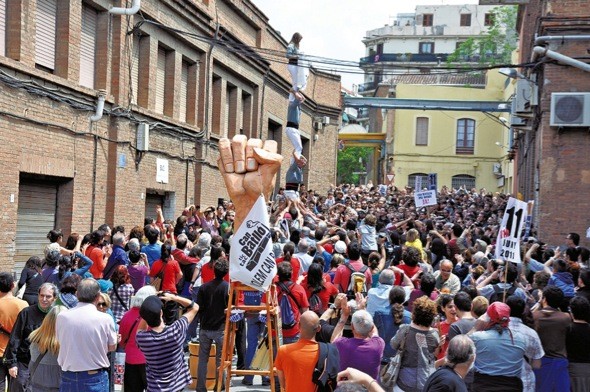 The fist of Can Batlló, a symbol of the struggle of La Bordeta to control their own community [photo: Ricard Cugat] 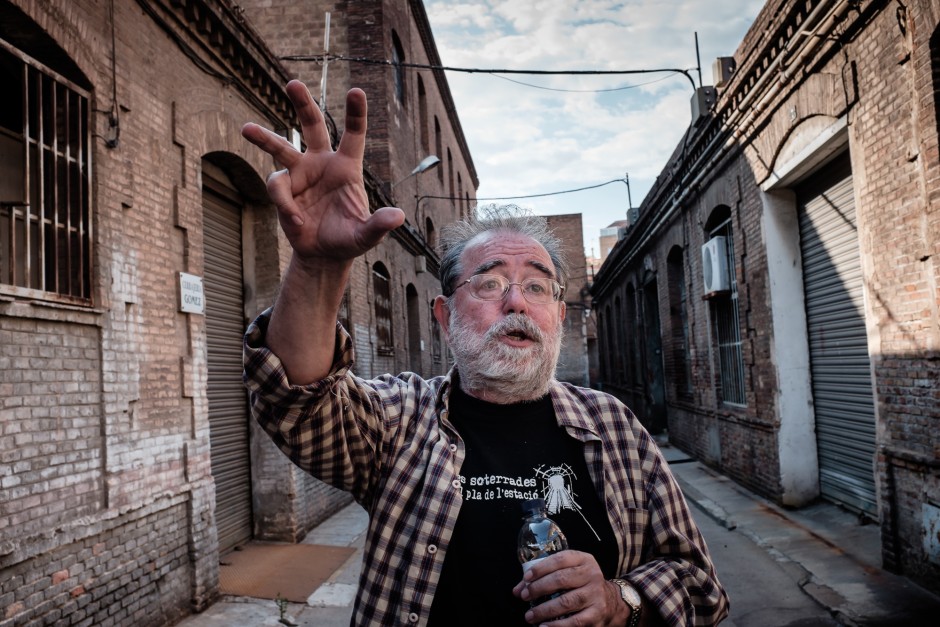 Our fabulous guide through the place and its history   [photo: Robert Pluma]

One of the high points of my time in Barcelona was a visit to Ateneu Candela, a social center in Terrassa, a small formerly industrial city of 300,000 people just outside of Barcelona.  Self-managed and populated by various projects and collectives, the space hosts a bar/cafe, a bookshop,  3-D printing workshop, a radio station, recording studio and a large meeting hall that is also used as a performance space and for all kinds of gatherings. I bought a book there about the history of anarchist collectives and, after he couldn’t find the poster that describes Candela, our host gifted me a t-shirt.

I like the way Lucas described the connection between social centers like Ateneu Candela and Spain’s wave of a new kind of politics: “A lot of the people that we met come out of these spaces, including people who never would have run for office, who never voted before, and are now city council members…It’s an evolution of a couple of decades of how these spaces have expanded and networked and are a kind of hidden backbone that makes a lot of the movement’s energy possible.” 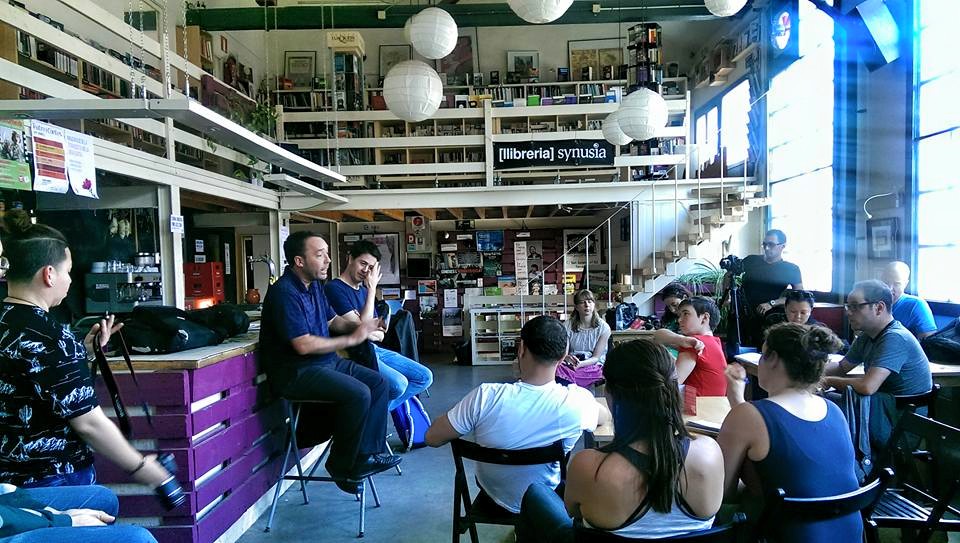 Although I didn’t visit this place (I was only on the Barcelona leg of the trip) I am nevertheless entranced and intrigued with Traficantes de Sueños (Traffickers in Dreams) – a bookstore, movement center, and publishing house located in Madrid.  I am entranced and intrigued enough to pause and rewind many times the Spanish language video of  a very rapidly speaking Beatriz García who explains their business model.

Traficantes is a serious actor in the free culture movement. They publish all of their their titles under a Creative Commons license and then make them available for free online, while at the same time they also publish hard-copy books. They are both a physical and online movement space for the exchange and publication and debate and discourse of ideas. Here are some photos of the bookstore from fellow traveler, Robert Pluma. 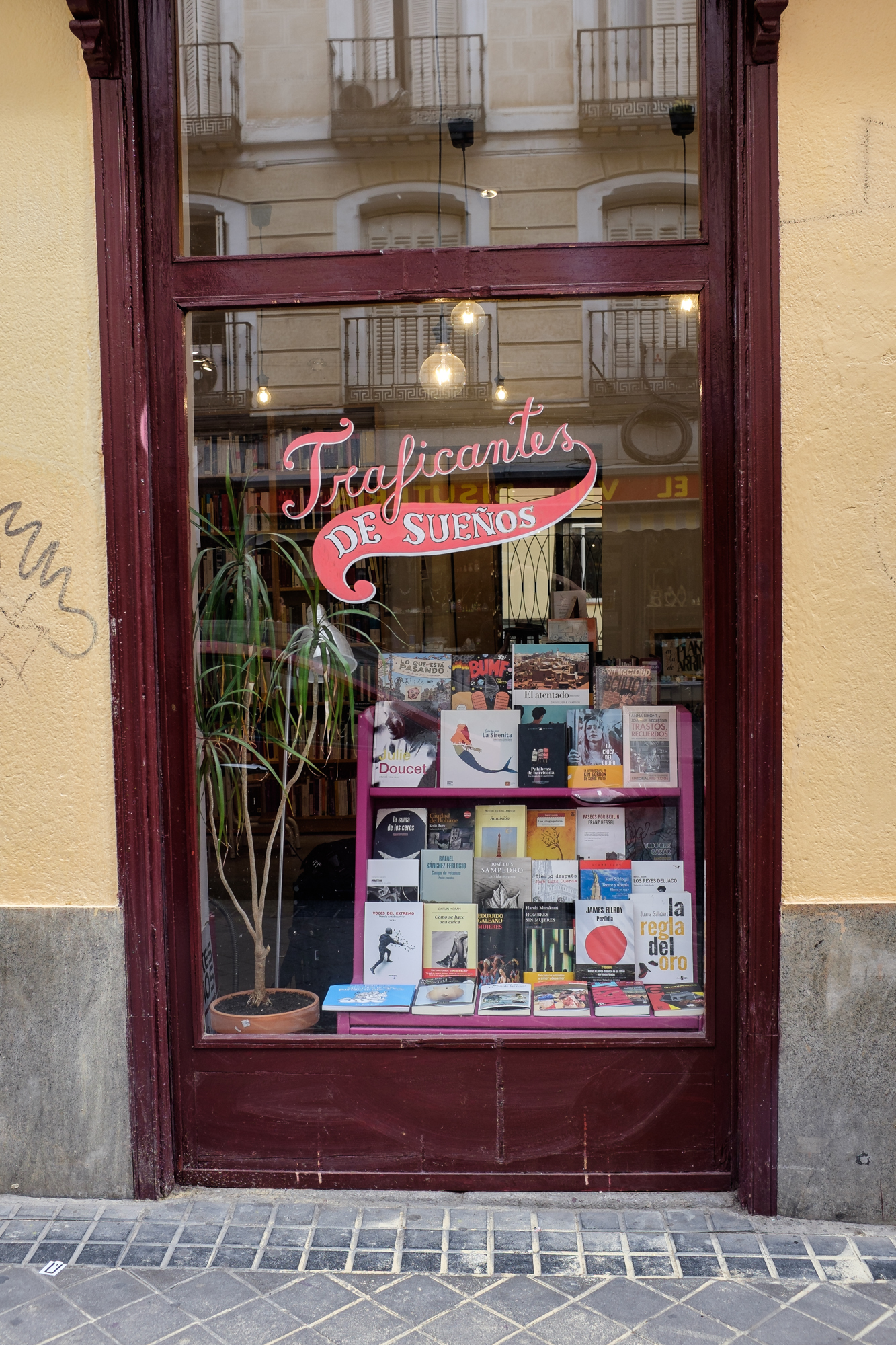 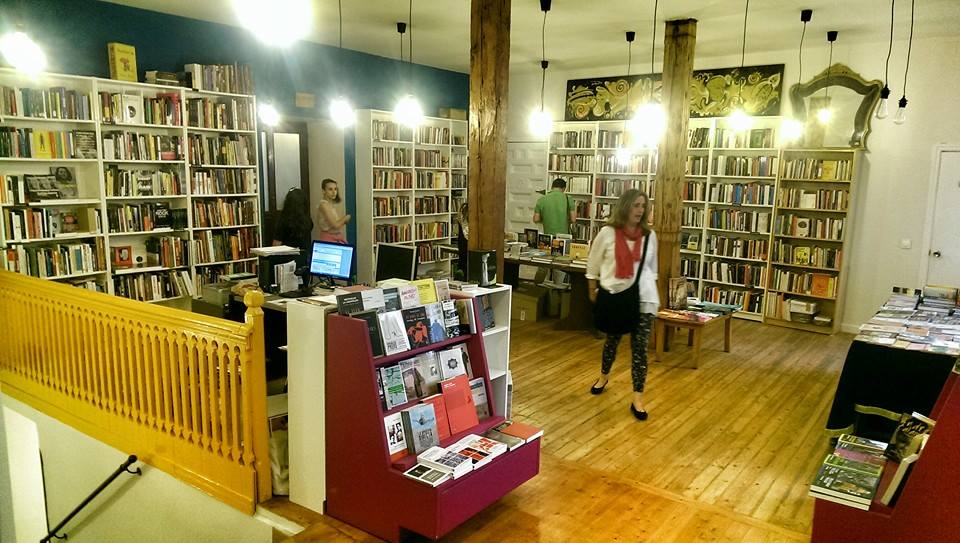 So…what do I plan to do with these inspirations? Stay tuned, my friends, there is more coming.