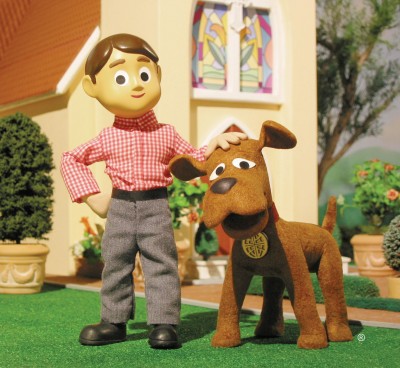 When I was a kid there was this 15-minute Claymation show called Davey and Goliath. I remember it came on Channel 9 at odd times. Davey Hansen was also a kid, nine or ten I guess and his dog was Goliath, who could talk. The Clokey’s who did Gumby, along with a man named Dick Sutcliffe, created the stop-motion episodes of this Christian-themed show. While some of the episodes were straight up about communion and other doctrines of the Lutheran church (the show was produced by the Evangelical Lutheran Church in America) others were more subtle teachings about issues of right and wrong. How some everyday problem would happen like one of Davey’s pals found some money but didn’t turn in to the pastor or the cops and then the moral conundrum was what should Davey do about that with the help of his trusty dog.

The show is credited as being one of the first to have a black and a Latino character in a regular roles as Davey’s friends in its 1960s incarnation – though the show would be revived on into this century. Attesting to its cult status, the show was parodied on the Simpsons and in some Claymation-like bits on Mad TV, a comedy skit show where Key and Peele first got national exposure. I can’t say for certain that watching Davey and Goliath gave me an undergirding in matters like fair play and duty, and didn’t have them on my mind when I first got to Lutheran High. Fact what starkly sticks out that fall of ’69 when I first got to the school was us freshmen sitting on the bleachers on the athletic field.

There this good-sized white guy who’d been a star of the football team, the Lions, was giving us a pep talk. He mentioned that he’d recently graduated and he’d enlisted in the service and was on his way to Vietnam. I suppose he had also watched those Davey and Goliaths growing up and he expressed something to the effect that it was his Christian duty to go and fight the godless communists. He quietly scared the shit out of me, what the hell was I getting into here? It wasn’t like I was a “real” Lutheran, my parents wanted me to get a private school education but pointedly had not had me go through communion class at Ascension Lutheran, the middle school or junior high as we called them then, that I went to after graduation from public 61st Street Elementary in my South Central neighborhood.

I mean, here I was 13, having skipped a grade along the way, but had heard the rumblings of the Civil Rights Movement and the Black Panthers and knew about the growing opposition of black folks to the Man’s war. Too, my pops, Dikes, a World War II vet, was far from gung ho about the possibility of me being drafted. But that was five years away at that point and after that initial shock, I had the usual and distinct trials and tribulations of high school to adjust to in the coming months. It turned out Lutheran High would be a crucible of real life situations where I was among the first influx of black kids coming into the Lutheran schools.

For here you had our campus near Florence and Crenshaw, a neighborhood pretty much all-black by then, with white kids being bused in from places I’d never been to like the San Fernando Valley and Torrance. This was the only Lutheran high school for these kids who grew up in Lutheran system since grade school. Not surprisingly racial clashes happened on and off school grounds and in the locker rooms. But to their credit, our teachers, many of them young and influenced by current issues in the country, didn’t ignore these tensions. While we didn’t have any people of color teachers in those days, we did have bull sessions where topics like race relations, pre-marital sex and drugs were facilitated by our hip Pastor Bill Schmeling; Coach Lowell Goeker taught a black history class and I had my first taste of collective activism when me and my black teammates on the football team had a sit-down strike in the quad when the new cheerleaders were chosen and not one of them was black. We won a re-shuffling and two black girls on the squad. .

Small things but part of my formative years. That time and the effects Lutheranism had and still has on me have been on my mind lately due to the TV Land original show, Impastor   The show stars Michael Rosenbaum, who played the angst-ridden Lex Luthor all those years on Smallville, as gambler and petty criminal Buddy Dobbs. On the run from a loan shark he owes a hefty vig to, through a series of sitcom circumstances he takes on the identity of gay Lutheran pastor Jonathan Barlow

Fun and hijinks abound in the somewhere in the Pacific Northwest small town of Ladner with stuff like teenage sex with produce, weed smoking, and the fake reverend, always with scruffy whiskers on his face, stealing a diamond ring from the dead while being pursued by a hot blonde woman and a gay man, both on the church committee. Yet those long-ago lessons of friendship, family and sticking up to the little guy come through. A post-modern Davey and Goliath if you will and a heck of a lot different than either of those dour movies about Martin Luther what with his epileptic fits, constipation and helping usher in the bloody Reformation.

I’m waiting for that episode with Buddy high in bed with his sort of crime partner, the prostitute Ashlee, and one of those Davey and Goliath specials come on the TV.  A high Buddy dozes and Goliath steps out of the set to advise the slacker Buddy on his current dilemma.

I’m sure Pastor Schmeling and Coach Goeker must be shaking their heads somewhere…as they tune in each week.

Meanwhile, check out an episode: