It’s not that Joe Sacco is the first comics artist, a sequentialist if you’ll allow, to produce stories different from the bread and butter of the likes of Marvel or DC; grim costumed avengers in dark spandex or muscled babes with booties to bounce fifty cent pieces off and make change.  In the 1950s there was EC, for Educational Comics, published by William Gaines  They produced lurid crime and horror comics packaged in covers with hanging bodies, eyes bulging out, decapitated female heads and originated titles such as Tales from the Crypt and Mad.  They also published a different kind of science-fiction story in 1953 called “Judgment Day” written by Al Feldstein, and drawn and inked by Joe Orlando. 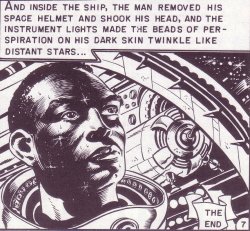 In the story a helmeted spaceman, Tarlton, a representative of the Galactic Republic comes to the planet of robots called Cybrinia.  The robots are identically built, divided color-wise into orange and blue.  Only it turns out the blues have less rights than their orange counterparts.  Observing this, Tarlton decides the Cybrinians aren’t ready yet to be admitted into the Republic.  Then in the last panel as he heads home in his ship, he removes his helmet to reveal he’s black.  The then Comics Code, the supposed arbiters of what was fit material for America’s youth, tried to shitcan the story but weren’t successful

During the heyday of the underground comix era of the late ‘60s to the mid-‘70s, hippie publishers like the Rip Off Press, Last Gasp and Krupp Comics Works put out mostly black and white, with color covers, comics by a new wave of artists and writers.  They were weaned on the antiwar movement, the Black Panthers and copious amounts of marijuana smoking.  Some of these artists worked as assistants to mainstream, superhero artists. 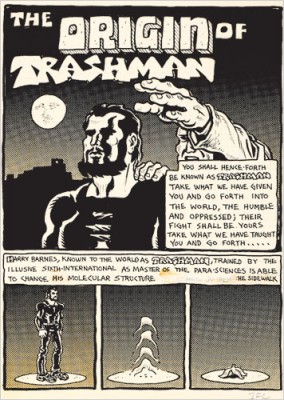 While he wasn’t an assistant, in the pages of the East Village Other, ex-Road Vulture motorcycle club member Manuel “Spain” Rodriguez introduced his superhero, Harry Barnes, a mild-mannered auto mechanic who becomes, after his wife is murdered by the fascist cops,  Trashman, Agent of the 6th International.

He was a Che Guevera slash biker-looking dude in black setting matters to right in a dystopian future of feminist fighting she-devils, and where class traitors were dealt with harshly. Woman artists and writers, tired of the sexism and objectifying going on in mainstream and in underground fare – like Trashman — produced such titles Tits & Clits, Twisted Sisters and Wimmens Comix.

It was in the pages of the underground Funny Animals in 1972 that Art Spiegelman first did a three page strip called Maus, about Nazi cats and Jews as mice – this eventually becoming his Pulitzer Prize winning retconning of the Holocaust.  In the pages of the Panther’s newspaper, artist Emory Douglas did a three page strip called Public Housing, U.S.A., a primer on the ills of that system.

The undergrounds paved the way to what is today termed alternative comics.  Where Ho Che Anderson did King, a graphic novel version of the life of Martin Luther King, Jr. and Guy Delisle derived Pyongyang: A Journal of North Korea after a chaperoned visit there.  In this is steeped Sacco’s realty-based sequentials.  His seminal work is Palestine, wherein the term comic journalism surfaced to describe what it was that Joe Sacco had done – sequential stories reflecting the first Intifada in the Occupied Territories when he was there for two months in the winter of 1991-‘92.

“Comic books are a universal phenomenon associated with adolescence, “ the late Middle East scholar and activist Edward Said wrote in an introduction to the collected tradepaper version Palestine in 2001 derived from of the six-part comic book series.  Said went on to note, “I don’t remember when exactly I read my first comic book, but I do remember exactly how liberated and subversive I felt as a result.”  Said doesn’t identify the comic book but it probably wasn’t an issue of the Flash, more likely one of those troubling ECs.

Sacco’s style as he tells us in his forward to Journalism, which collects comics stories about the Hague, Palestinian territories, the Caucasus, Iraq, immigration and on Kushinagar in India, is not objectivity.  He freely admits he creates scenes from second hand accounts and understands by his depictions and words there’s going to be subjectivity – what he shows and what he doesn’t show.  Like Michael Moore and Harvey Pekar, he is part the story, bringing his personal perspectives to bear.  [Scroll down]

“By this I mean whatever I draw,” he wrote, “must have grounding in the specifics of time, place and situation I’m trying to re-create.”

The captions Sacco uses in his panels are partly about constructing the narrative but also he’s reflecting on a particular matter or is setting up the question he’s asking the person he’s depicted in the panel, their word balloons an answer to the question.  Or he’ll break the fourth wall and have the person look out at us the reader and directly “speak” to us to express their point of view as he does in the part of the book dealing with undocumented Africans coming to Malta.

Recently too, Joe Sacco has finally turned his eye to the domestic front in the recent book with Chris Hedges, Days of Destruction, Days of Revolt.   Sacco provides single panel illustrations and some comics pages to Hedges’ text as they look at ruin and resistance from the Pine Ridge res to Camden, New Jersey, the poorest city in America.

Being a life-long comics reader of superhero, crime and alternative material, and having written in the medium, I’m somewhat torn by what Sacco’s doing – legitimizing by his earnestness this bastard of pop culture, comics.  But then I realize he and Spiegelman and the late Pekar are seen by the lefty culturalatti as refined, as thinkers, as different than the low brow grind those writers and artists do putting out the adventures of Wonder Woman and Captain America.  They’re right of course.  But how cool would it be if Spain Rodriguez and Joe Sacco could have a meeting of the minds and come up with a superhero who took on corporate polluters, banksters and evil developers?

Here are a couple of videos of Joe Sacco and Chris Hedges talking about comics as journalism:

Joe Sacco at the Lannan Foundation

Chris Hedges on Days of Destruction, Days of Revolt