Seeds of Autonomy in Greece

While the economic crisis has hit all of us, and hit us hard, Greece is a country riding the edges of bankruptcy, even after the intervention of the IMF and the European Union.

This intervention has come at a high price, requiring Greece to slash its national debt at a brutal cost to its own citizens.

To find out more about the impact of the crisis on the lives of people and how they are responding, I recently spoke to Antonis, who is from Greece and is a fellow graduate student at the London School of Economics.

ANDREA: Tell us a little about yourself.

ANTONIS: My name is Antonis. I’m a student here in London and I’ve lived here for quite a few years. But I’m originally from Greece. Since the revolt of 2008, together with some friends, we’ve been covering what’s been happening in Greece in a blog, the Occupied London blog. We were also running a journal, an anarchist journal, called Voices of Resistance from Occupied London. But I think our project was one where the blog completely overtook the journal itself, so that’s what we’re focusing on at the moment.

ANDREA: Would you just say a few things about how concretely the crisis has affected Greece, and how it is affecting people in their everyday lives?

ANTONIS: Obviously it’s had a massive effect on every single level — the political, the social and the everyday — all around. And it’s happened very rapidly.  Its very hard to explain in a few words how big the change is because its something we are still assessing. People are still trying to grasp what has actually happened.

But to see the difference in the everyday reality in the country and in people’s mentality, even from December (which was the second to last time I visited) to March this year (which was the last time I was there) is tremendous.  To put it quickly, pretty much everyone, or at least most people I know who work in the public sector (and the public sector is huge), are facing the same sort of decrease in their wages — about 20 to 30 % of their total wages, anywhere between the two roughly.  And they probably are faced with even higher cuts in their pensions —  if you ever get to get a pension, the way things are going.

The private sector is about to go through the same kind of process and the cost of life overall has increased tremendously. Just to bring one example out of many: the cost of gas, from August 2009 to what they predict it’s going to be in a couple of months (in August 2010) has gone up by about 150%.

ANDREA: So how are people reacting to this? I know there was a general strike just a few weeks ago…

ANTONIS: Four weeks ago… There’s been a few general strikes actually; the one on May 5th was the fourth in 2010 if I’m not mistaken. Which is not that much, by Greek standards, you would usually have at least a couple of general strikes in a year anyway.

ANDREA: And so when you say general strike, is it really everything that shuts down?

ANTONIS: Pretty much. Airports completely shut down, transport is completely out. And the largest part of the public sector. Not the private sector, and of course one of the sectors where people are pretty much bullied into working is the banking sector, and that’s why the people who died on May 5th were actually in the bank working, they were forced to work, and threatened with being fired if they did not stay in the bank working. So the answer to that is yes, one reaction has been these relatively frequent general strikes. But then, the atmosphere in the country after May 5th has changed dramatically, people are very scared, they’ve been very taken aback by the level of violence on that day.

They are expecting more trouble even though this summer is probably going to be a dead period because nothing ever happens in Greece in the summer: It is way, way too hot for any kind of action! But come September … we are expecting, quite realistically, that anywhere between September and December the country is going to default; it is also most of the economists are predicting this, so of course it will be interesting to see what happens then.

ANDREA: So you don’t think that Germany will step in again, or that the rest of the European union will bail them out?

ANTONIS: It seems like it’s pretty much inevitable, that Greece’s default is something just waiting to happen and they are trying to allow it to happen in the most painless way for them, not for the people in Greece of course.

ANDREA: So what kind of alternatives are people talking about, are people thinking about long term change at this point, or that this is an opportunity to have a different sort of economy or different way of life aside from capitalism, is that being discussed?

ANTONIS: I guess there are two kind of tendencies toward which people are moving. One is individualization and a kind of despair: you hear a lot of stories, very personal stories about people going on anti-depressants after looking at the prospects of what is coming ahead. And of course this is really bad. But at the same time there is another tendency, of a lot of people trying to organize, to work collectively. There are a few projects being planned at the moment and they are going to be rolling out in the next few months, to head toward a more self-organized economy at least on a very local level. So people are talking about anything from self-organized bakeries to self-organized soup kitchens. Which on the one hand is emergency relief, but on the other people are really trying to avoid, I think, these projects taking the character of charity. We want them to be more of a solidarity thing, so it’s going to be emergency relief for now, but also a  structure that could live through the entire crisis itself and into the future.

ANDREA: So you’re going to be working in a bakery, right?

ANDREA: So how did you set that up?

ANTONIS: I mean it’s still very much on paper, it’s just an idea we’ve been having. But we just said, you know, hell, we have to build on the ideas that we had and the experiences that we had from comrades abroad, in different projects abroad, the cooperative movement in this country but also in the States, as far as I know, it’s huge. So we can build on this experience, and build on the experience of, say, the Italian self-organizing autonomia movement. And we’re trying to combine the two, and of course many of us have seen that large part of the population is coming to the threshold of starvation, of bare survival, and so you have to kick in at that point and try to address these people and their needs. Again, like I said, absolutely not as some sort of top-down charity and “we’re here to help you” kind of attitude, but to organize with them.

ANDREA: So just one last question, if you could tell a little bit the story of December Park?

ANTONIS: This park is quite amazing, the history of this space. It’s what used to be an abandoned parking lot only a few meters away from where this kid Alexis was shot in December 2008, and of course his assassination triggered the revolt of December, so symbolically it’s very important. An abandoned ex-parking lot was lying there unused for many years, and a few months after the revolt a group of people came in, mostly local residents, and said “we are going to take over the space.” Athens has very few green spaces and very few public spaces, so they said, “we are going to turn this into one.” In a way, this is not too far from the kind of guerrilla gardening that you’d maybe see in New York and other places, but at the same time very specific to the Greek situation, a very strongly political space. So people have done a really amazing job in transforming the ex-parking into one of the nicest spots in Exarcheia, and ever since it has been very lively. Many political demonstrations start and end in this park, and of course it has attracted a lot of notice from the police: there has been at least three major raids by now. In the last raid more than 70 people, and two dogs, were detained by the police. 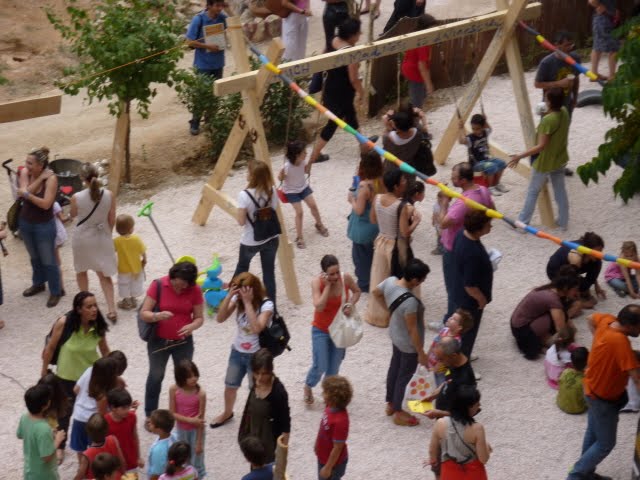 ANDREA: That’s not funny at all…[still laughing]… so basically over the summer you’re going to work to build something…

ANDREA: All right, so I suppose we’ll be checking back in with you in September?

For more on the situation in Greece, check out the Greek Indymedia website.   Dr. Pop and Antonis would also love your comments and suggestions for good resources related to building cooperatives around the world, and the strategy of emergency relief as a movement-building solidarity effort.  So please share websites, further reading, and advice!