Today I planned to share my experience with the 1970 board game, SMOG. But that’s not going to happen. For two reasons:

Tony:  Gilda! I’d love to help you take the game Risk and replace troops and cards with money and lobbyist goals.

Gilda: OK! Let’s do it. Just so you know….you will have to teach me Risk. I’m new at the game thing, but jumping right in.

Tony: Let me know when and we’ll put it together! i’ll even bring over my own version of risk and we can play. it’s essentially a world-war game where you’re given strategies on cards and actual military. i’d probably add another rule that you collect cards (more troops in the game, which will be government cash for redevelopment probably) when you lobby for it. but the game has strategy cards, so yeah… more fun to be had!

So that’s what happened. 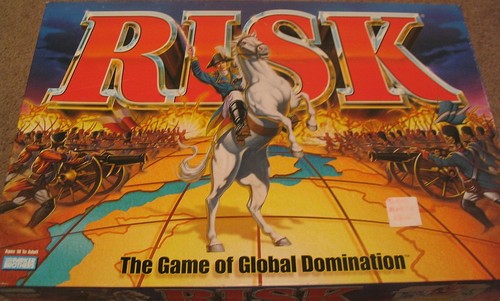 Tony brought the game and Rebecca Schoenkopf (commie girl) and Paul Takizawa (the artist who took all of the best Havana photos on our trip) joined us.  And so did comrade husband, Gary Phillips.

Tony taught us the basic moves, which involve a lot of dice, lots of little tiny soldiers, and strategy cards.  He also taught us the goal, which is World Domination.  Pretty straightforward.

We played and had fun.  But there was a sad part.

Risk is one of those games that is designed to eliminate players before the end of the game. How the hell else are you going to take over the world? And I was so engaged with my many dice and trying to hold on to the Middle East or China that I didn’t even notice that Rebecca had been eliminated from the game, as I handed her the dice for her turn.  No dice. She was out. How sad is that?

I now appreciate the “German game” standard which is that you just don’t do that.  Everyone stays in the game to the end.  I think I have German tendencies.

On the other hand, Tony might be right. Risk might very well be the perfect City Hall simulation game. Its not boring. You are in a constant state of positioning. You switch up alliances and attacks to win. When people get eliminated….well, the others just keep on playing. Now that I get all that, maybe Tony and I can have a go at making a new game.

It just can’t be sad.

But what I really like the most about Risk is the story of its creator.

Risk was created in 1957 by French film director, Albert Lamorisse, just a year after he had won the Palme d’Or Grand Prize at the Cannes Film Festival, as well as an Oscar for best original screenplay for The Red Balloon, which I remember well from my childhood. As does everyone else. It leaves an emotional imprint.

The Oscar award is pretty amazing because the film is (a) French (b) only 34 minutes long, and (c) has virtually no dialogue. But the film transcends it all with pure visual storytelling.

The story is about a little boy (played by Lamorisse’s 6-year-old son) who has no brothers or sisters or friends. One day, on the way to school, he sees a big red balloon, tangled around a light post. He rescues it, but can’t take it on the bus, so he walks to school and hides it in a closet until he can take it home. His mother, however, throws the balloon away, but the balloon hangs around, like a loyal puppy, and follows the boy around and becomes his companion.  We watch amusing interactions between boy and balloon until tragedy strikes — a bunch of bully boys gang up on our hero and ultimately pop the balloon. Our hero (along with the audience) is reduced to tears, but not for long.  A crowd of multi-colored balloons descend to comfort him, and then take him high above the rooftops of Paris, presumably to a place where little boys and their balloons can be friends in peace. 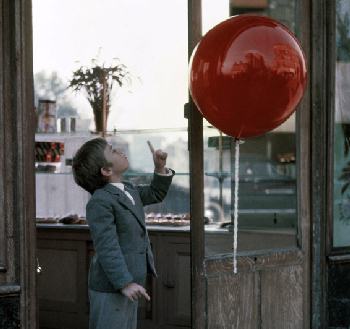 Here’s a YouTube video of the balloon’s death scene:

The film offers a grey, post-war Paris, which makes the red balloon all the more extraordinary. There is rubble. There is harshness. Its hard to imagine that so soon after a terrible war, the same sensitive filmmaker would create a game about world domination (the original name of Risk was La Conquête du Monde — Conquest of the World). But maybe that’s the point. To turn all of those difficulties and hostilities and pain into a game. People have different ways of working these things out.

There’s more to the Lamorisse story. In the late 60s, he was commissioned by the pre-revolutionary Iranian regime to make a propaganda movie about Iran’s “modernization.” But Lamorisse went all “Red Balloon” on the project and made instead Le Vent Amoureux (Baade Sabaa in Persian, The Lovers’ Wind in English), a documentary of visual poetry in which the wind takes us on an aerial tour of Iran, and the wind narrates the country’s history and culture.

The Shah saw the film in 1970. He hated it. He asked Lamorisse to edit the film by adding scenes about him, of course, as a great leader and Iran as a modern country made up of magnificent dams and colorful neon. Lamorisse agreed to do the work, but at this point he no longer had the specially outfitted helicopter that was used for the film’s aerial shots. He used the military helicopter and pilot that the Iranian Army made available. In June 1970, the helicopter crashed and Lamorisse and the crew were all killed.

The Iranian revolution ensued, and eight years later, Lamorisse’s widow and son (the boy with the red balloon!) re-edited and completed the film based on his notes. The move was released in 1978 and was nominated for an Oscar.