For a general introduction to the theory and practice of restorative justice, check out:
Restorative Justice online. I sat next to an astrophysicist on the flight to South Africa, one who was on a mission to observe the first stars as they formed. How does one look back millions of years to the moments when stars were first coming into being? Well, apparently you just need a very sophisticated radiotelescope in an area with very little interference. My neighbor in the aisle seat, a scientist and professor at Berkeley, was taking advantage of a much larger project called the Square Kilometer Array. By tuning into certain frequencies, this man and his colleagues would be able to gain key insights not just on how stars form, but on the dawn of the universe itself.

In order to understand this project at all, I had to change the way I understand time and space. Here is the thought exercise I was given on that flight: Think of the universe as a balloon. As more air goes into the balloon, it expands. What we experience as time is the expansion of the balloon, moving everything outwards as it goes. Earlier moments in history, like when stars first formed, are really just points that are further out on the balloon. By looking outwards towards those points scientists can capture information that has taken millions of years to travel back to us. This information can then be analyzed, put into equations, and used to fill out our contemporary understanding of the expanding universe, its origins, and perhaps even its future directions.

The balloon metaphor is an imperfect one, but it’s a start. I like it because it challenges me to think about my travels, and my life, in a totally different way. I am not growing older. Time, at least in the traditional sense, is not passing by me. Rather I am moving outwards, with a first-class seat in an expanding universe. Of course, none of us is on this journey alone. All of existence is in it together, at different phases and stages of becoming. Once I landed in Johannesburg I began to enter a new phase in my own unfolding life, one marked by political education and peer learning, by the fruits of other people’s struggles and by my own bonds with a group of trouble makers who call Chicago home.
I was heading to South Africa as part of a restorative justice delegation from the Windy City. Our group brought with it a diverse history of activism, action, and hustling for change. Some of the delegates were working to transform the disciplinary culture of the public school system, others were community leaders deeply rooted in neighborhood life, several had been working for decades to reform the ways our society responds to domestic violence, and many in the group had dedicated their lives to working with young people to shift power in their communities. All of us were practitioners of conflict resolution methods like peace circles, and all of us shared a basic belief in the power of groups to come together to address difficult issues, to deal with the conflicting forces in our lives. 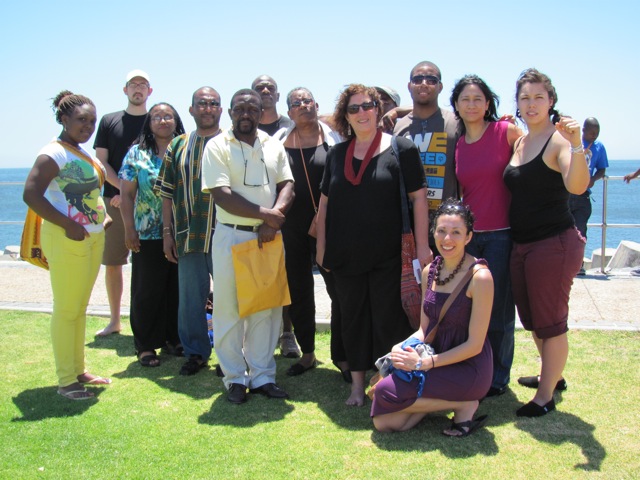 For 2 weeks we meet with like-minded folks in Capetown and Johannesburg, interacting with an incredible array of people, places and projects. We connected with students, principals, teachers turned into police, preachers turned into organizers, community groups, and a whole host of amazing folks. We were there for the 20th anniversary of the release of political prisoners during apartheid (February, 2nd 1990). We were there as South African cities scrambled to ready themselves for the FIFA World Cup. We were there as much of the world heard about the marital and extra-marital exploits of the current ANC leader. We were there to listen to the Soweto Youth Choir, and to hear Hugh Masekela and Sibongele Khumalo perform together live at the Market Theater. But mostly we were just there, riding the balloon together, taking things one van ride and one conversation at a time.

Here is a bit of what we gleaned, first from the new folks met along the way and then from the new ways we began to see each other on the trip. South Africa is incredibly gorgeous, well-resourced, and it is clear why so many wars have been fought over its abundance (oceans, mountains, diamonds, gold, etc.). Apartheid is over legally and politically, but economically there are still fierce and not easily surmountable divisions. The country’s resources are primarily owned by private and corporate interests, who are largely White in a nation where White’s are the clear minority. Maintaining this division of wealth was built into the 1994 agreement between Nelson Mandela and the Apartheid leaders. According to the deal, Black people were to gain political power, but Whites would continue to govern the banks, mines, and other key resources. Meanwhile, real progress has been and is being made. A “revolutionary government” is in power, hundreds of thousands of houses have been built, and the old forms of state-sponsored violence are over. Tomorrow’s battles center around challenges that we share back here in the USA, challenges like creating jobs, moving more people out of slum housing, making neighborhoods more harmonious, and sharing the immense wealth that resides in our borders. In all of these areas, South Africa is still full of tension, full of competing forces that wish to determine the future outcome of the nation. These forces may be less clearly defined than in decades past, but they are certainly still ever-present.

And then there were the lessons learned by our group, interpersonal insights that came from the ways we navigated our own tensions and conflicts. As a collection of folks committed to shared goals back in Chicago, our purpose was not just to see new sights but also to deepen our bonds with one another. We learned about how each other came to the work we do, as well as some of the obstacles and opportunities we have faced along the way. And we learned to face new challenges together. At key moments throughout the trip we committed ourselves to sitting in circle, and to processing the group dynamics that were unfolding. We offered support, confrontation, and feedback, all in a spirit of genuine concern. Having the courage to speak our truths to one another was, for many of us, one of the most valuable dimensions of the journey. When things grew especially trying, this honesty was the force that kept our universe expanding (and thus kept our balloon from popping). Honest loving feedback was the energy that propelled our wild ride and, now that we’re all back stateside, it’s this same energy that will keep us moving forward, outward, and beyond.

I do not know how the first stars formed or what the universe looked like at its birth, but I get the feeling that they were not entirely different from the history of South Africa or the processing of our small delegation. All of these phenomena were full of tension, of conflicting forces, and competing desires. They were moments where things like matter, gravity, light, and pure energy were at odds with one another. I believe that we have much to learn from these moments. And whether the question is the future of a solar system, of a nation, or of a small but dedicated group of trouble makers, the question seems to be how these conflicting forces work things out. The state of such tensions is what separates black holes from suns, oppressive regimes from liberated lands, and disparate groups from serious forces for transformation.