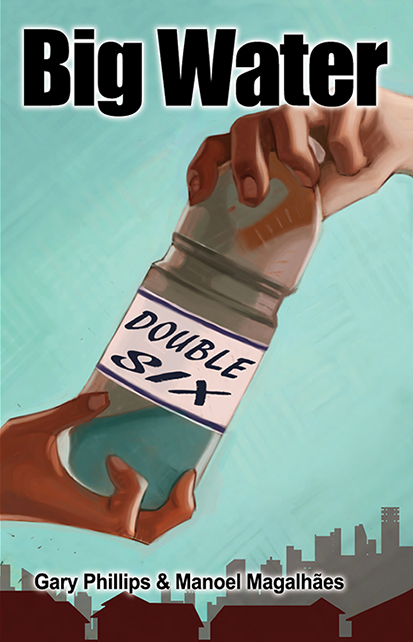 In Southern California’s quiet Bell Park, there’s a war going on. Old guard commissioners from the town’s water board are making a bid to privatize the cash-strapped small municipality’s water supply.

But the residents smell a rat. They organize a special election to run candidates who will keep their water affordable and under public control. Hometown organizer Melinda Cruz finds herself at odds with her brother, Jaime, who works for Double Six, a multi-million dollar designer water label lusting to capture the town’s historic acquifer.

Political corruption, double-dealing, loyalties and betrayals, even the mysterious death of a city hall lobbyist, all unfold as forces contend for the most precious of resources.

Big Water promises that once you finish the story, you won’t take water for granted again.

Big Water was crowdfunded on Kickstarter with the help of our activities director, Beverley Keefe, over 100 Kickstarter backers, and EVERYONE at Dr. Pop. Big Water is Dr. Pop’s first graphic novel. You can buy it on Dr. Pop’s own store, on Amazon, or by giving us a call at (323) 601-1564 and letting us know how you prefer to make transactions.  However you do that, please come back and let us know what you think.