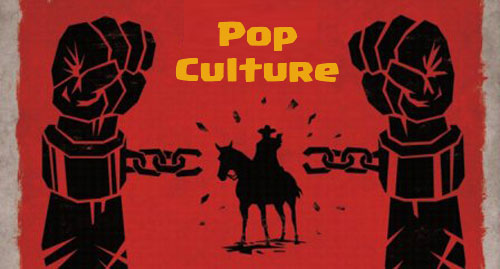 I don’t know if it’s been instructive, but it has been interesting to chart the reactions, negative and positive, Quentin Tarantino’s Django Unchained has garnered among the black intellgencia.  I liked the slavery-spaghetti western mashup.  But then, to me real events are there for the plucking, to be appropriated by pop culturists and re-imagined.  As one of the few patrons sitting in the Rave theater in the Baldwin Hills Crenshaw Plaza last year during a matinee, I damn near fell out of my seat at a particular scene in Abraham Lincoln, Vampire Hunter, another example of the mashup.  In this flick, ol’ stove pipe hat wields a silver edged ax like a three-armed samurai.

There’s a scene where Jefferson Davis, leader of the Confederacy, makes a pact with the head vampire to work together to defeat the Union Army.  In this way slaves would not only still be the labor force propping up the South’s economy, but food for the vampires.  Damn.  Well, that must have quelled the film being shown in various parts south of the Mason-Dixon Line. But I suppose since the film wasn’t a hit, like Django Unchained, what white Johnny Reb backlash there was to that scene was minimal.  Though I imagine if the screenwriter or the director were black, that would have engendered some pin head commentary from the self-appointed arbiters of “American” culture on Fixed, that is, Fox, News or the Rushness himself.

For surely Tarantino as writer-director has pushed the buttons when you have the right wing Limbaugh denounce his film as it being ginned up that we are still a slave nation.  Edward Boyer in a piece for Zocalo Public Square reported on a panel that took place at Eso Won Bookstore in Leimert Park about the film.  He reported that the panelists did not like the film for various reasons including distorting the history of slavery, gore for gore’s sake –a critique that is pretty much leveled at all of Tarantino’s films, and so on.

While Tarantino is full of it to proclaim that the landmark mini-series Roots, based on Alex Hailey’s book,  didn’t ring true for him, being defense about his work, as someone who also appropriates real world events for fiction’s sake, I don’t think there are any sacred cows.

Hogan’s Heroes, a popular ‘60s sitcom “inspired” by the movie Stalag 17, portrayed the Nazis as bumbling buffoons forever out-smarted by the clever American Prisoners of War.  White Man’s Burden (turning on its head Rudyard Kipling’s racist statement about the plight of Indians of India being a fetter on colonial England), a film by Japanese-American filmmaker Desmond Nakano posited a world where black folk were the top dogs and whites had to struggle for their place in it   And in the recent alternate history novel Africa Reich by Guy Saville, Africa has been carved up by Britain and the Nazis, with black Africans either being killed in a genocide fashion or being shipped off to some massive horrible labor camp in the Sahara.

The point of all this is in how writers and such handle the dynamite of these so-called untouchable topics.  Years ago when I set out to write Violent Spring, my mystery novel set in the aftermath of the ’92 civil unrest, I did think long and hard on how I would portray the fragile racial and ethnic fault lines evident post the riot.  The trick wasn’t to shy away from these matters, but how to come at them so as to give the various characters in the story their due – give them dimension.

A couple of years ago a publisher replaced the ‘n’ word, or a lot of the 250 times it’s used, in Mark Twain’s Adventures of Huckleberry Finn with ‘slave.’   That’s foolish.  You want to criticize the work, fine.  But it’s accurate that the white characters in the novel, set in the mid-1885 would freely use that word.  Yes, Tarantino uses the ‘n’ word for comedic effect at times in his film, and certainly that can be critiqued.  But pop culturists, if I can use that term, can’t be worried about who they might offend or not.  That doesn’t mean be insensitive to realties, I’m not suggesting we get all South Park sophomoric all of a sudden – though that show too has had its clever moments.

I am saying that you have to wrestle seriously with these issues be it racism, sexism, and so on.  Tim Cogshell, a black film critic, who mostly liked Django Unchained, stated on KPCC’s FilmWeek, he did have to wonder why was he again sitting in a theater watching a film written by a white writer-director dealing with slavery.  The implication being Hollywood films like Slaves and the best forgotten potboiler Mandingo, had been there before in some respects.  Though it should be noted that 1972’s The Legend of Nigger Charley, about escaped slaves becoming gunfighters, starring the redoubtable Blaxploitation icon Fred Williamson (also in the sequels the Soul of Nigger Charley and Boss Nigger, which he wrote and produced) was in many ways the Django Unchained of its day.

But it’s not as if Slaves and Mandingo were the only examples from the past.  In the wry Skin Game where two catransported back to the slave south after stepping into Elmina Castle, where slaves were held before being shipped across the Atlantic.   Then there’s Ill Gotten Gains, about a revolt of the chained on the slave ship Argon Miss with Eartha Kitt voicing an African statue – I kid you not.  There’s also the well-done faux doc, The Confederate States of America that deserved more heat and attention.

In that FilmWeek segment, Cogshell said he longed for a film about a black superman.  I can dig that.  There are many stories with people of color as the leads yet to tell – as heroes and as villains and points in between.  Those stories might not always make the silver screen, but there are too many avenues of print and e-books, web series and what have you to lament Hollywood not opening its doors wider to an array of material.

That doesn’t mean you’ll please everyone with your particular take on a story.  For as Boyer points out in his piece about the discussion at Eso Won, when panelist Ayuko Babu, executive director of the Pan-African Film Festival asked for a show of hands from the audience on who liked the film, nearly all hands when up.

Sometimes you can’t please anybody but yourself.