Great things have been claimed for the Olympics.  Superlative things.

They will be the ‘regeneration’ games, transforming East London, considered one of the poorest areas in the United Kingdom. The price tag? Initially viewed as several billion pounds, the estimates have soared ever higher.  Eleven billion pounds? Twenty-four billion? No one really knows.

But its an urban planning bonanza, right?  They will transform part of East London –– but how?  And whose will be the vision? The answer is not at all pretty.

I grew up watching the Olympics, I even had a little dream in the back of my head that maybe I too could be among these brave young champions giving their all in a competition with people from all around the world. There is a beautiful core to the Olympic games, which gives them a power and immense popularity. Increasingly, however, they have turned to the dark side, and now the Olympic juggernaut actually resembles the death star when it comes crashing down on a community. As Gary’s article on democratizing sport showed so clearly, there are issues with who competes in the Olympics and who does not. I also personally dislike the way they have been commercialized. Quite a lot. Meet the most inane mascots since the last Olympics. Forget about how all of us will get around the city while this is happening. But for residents of Olympic cities, the issues are truly massive. Terrifying levels of security, money going into corporate hands, speculation skyrocketing, regeneration never becoming anything more than state-led gentrification. Jobs? Maybe a few, but for whom? So here are a few main points of how planning has been working here in London.

This place is going to be swarming with police, private security, and army personnel. Stephen Graham in his recent article for the Guardian writes that 13,500 troops will be deployed, more than are stationed in Afghanistan.  They have been using new methods of locking up protestors, and they are developing and using new facial recognition technologies. If you want a nice jolt of adrenalin, just read the Daily Mail’s account of the surface to air missiles they are planning to place on a residential roof. A bit right wing maybe, and scaremongering, but even a bland description of surface to air missiles would scare me, I confess.

You know who this is going to affect most. Youth and young men of color, and possibly anyone wearing a hijab. The Newham Protection Project has created a video to try and make sure that people know where they can get help. I think well-known poet Benjamin Zephaniah explains the situation far better than I could do for the Newham Monitoring Project:

For more info, check out the Games Monitor website.

You click through a few screens and it states ‘LONDON’S BRIGHTEST INVESTMENT OPPORTUNITY: Due for completion in 2013, apartments in the tower offer an exceptional opportunity to take advantage of rising London rental yields. And don’t forget the potential benefits of the Olympics on future yields and values.’ It looks pretty good, but you can’t tell me the poor of Tower Hamlets or other London boroughs are going to be living here. 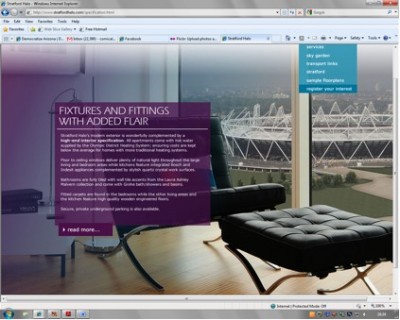 A view of the Olympics that most Londoners will never see, the stadium certainly looks better from this angle than from street level: It is primarily luxury housing being built, although the 1000 or so units that have been lost were hardly that.

Even the clean-up for the Olympics has been privatised and labelled. A chance poster on the underground surprised me, because surely they will be hiring people to clean? Not the greatest job perhaps, but a job. Because this is what is being said: ‘The Games are also a shot in the arm for the UK economy at this difficult time, offering jobs on the Olympic Park for the previously unemployed and millions of pounds worth of contracts for UK businesses.’

The millions of pounds worth of contracts is definitely right, though the figure should be raised, but turns out they are asking for volunteers, and have created yet another opportunity for Corporate PR: 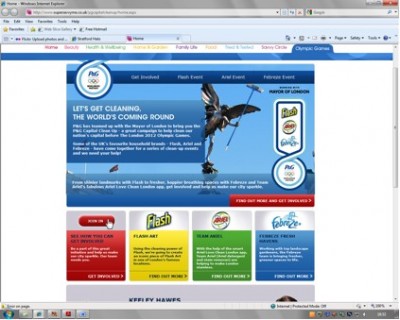 Considering that the ‘volunteers’ acting as stewards for the Queen’s 60th Jubilee in the hopes that they might be considered for an actual job as stewards for the Olympics spent the night under London Bridge, it’s pretty clear that rather than job creation, there are a whole lot of people being asked to do things for free. Because of the billions of taxpayers’ money that is paying for the games, there just isn’t enough to pay minimum wages to the poor for their help.

To get more of an overview, the Games Monitor site is brilliant.

But in South London we are fighting the closure of schools, the loss of hundreds of jobs, the privatisation of social housing, the closing down of all children’s and women’s services and so much more. To face the wealth and consumption of the Olympics side by side with increasing poverty and brutal cuts to the social fabric is no easy thing.