(Not) On the Bus in El Salvador

Observations on the motherland…. 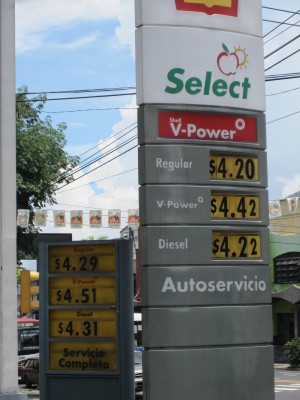 Every time I go to El Salvador, getting around is the quite the experience. The last time I went to visit family was in 2007. I decided to take my three friends to experience El Salvador, or the “motherland,” as I like to refer to it, since I always boast about it being the second best place on earth, besides Los Angeles. Gas prices were approaching U.S. prices (thanks to dollarization and global supply shortages), and car transportation was limited, so riding around San Salvador’s buses was the next alternative.

Bus transit in El Salvador is privatized, drivers either own their own buses, or are part of cooperatives, which set fares. El Salvador, as are many other countries in the developing world, is the final resting of all diesel-spewing buses that are gradually being phased out of our roads here in the States. The buses are brightly colored, with the a woman’s name across the windshield, listing all the key landmarks along each route. Compared to owning a car, getting around by bus is significantly more affordable as fares have remained consistently at $.25US. With gas prices surpassing $4 a gallon during my most recent visit in August 2011, and minimum monthly salary is around $125, I can’t help but wonder how in the world people are surviving.

This time around, my parents and I had to think twice, unfortunately, before hopping on a bus in Mejicanos, the working class neighborhood in San Salvador where my family lives. Last summer, 16 people were killed in downtown Mejicanos after two buses were attacked by gang members, one with bullets and the other doused in gasoline before being set on fire. Due to the growing gang violence in El Salvador, thanks to the United States’ policy of re-patriating suspected gang members back to their host country, bus operators are being forced to pay protection money. With rising gas prices, some bus operators have been hesitant to pay protection money in order to break even. However, there’s a price to pay for not complying. It sort of puts into perspective the one time things got crazy on the Line 207 bus when I was in High School and a couple of guys decided to practically destroy the bus, while everyone was still inside. 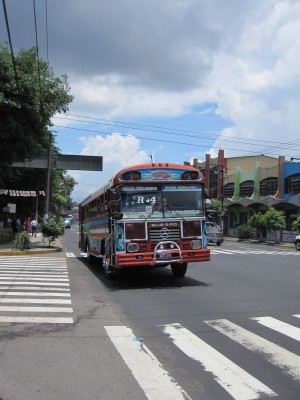 My aunt Gladis lives in a gated community (like most people in El Salvador) in the outskirts of Mejicanos, so a car is an absolute necessity. My grandmother, my cousin (her daughter) also live with her, and with safety being one of the biggest issues, I can understand why if you can afford one, you get a car. On the other hand, Catalina, the woman who works inside the house, takes the bus almost everyday all the way from Olocuilta, about 45 minutes away from San Salvador. She pays about $5US each way to get to work and the one time she brought a huge back of fresh corn from her farm, the bus operator charged her $8US. The week before we arrive, Catalina was also robbed at gunpoint by a guy sitting next to her on the bus for the $12US she was hiding under her shirt.

When my aunt’s car broke down a week into our two-week visit, we were completely immobilized. My mother was too afraid to take public transit, we were worried about how whether my dad would be able to handle getting on and off the bus with his circulation issues, and I was mostly worried about how much both my parents were going to stress me out. We ended up giving taxis a try. My mother was also afraid of getting inside a taxi because driving in El Salvador is like being in a demolition derby. But it was either the taxi, or us being stranded in Ciudad Corinto for two weeks. (The community is awesome, but still….) Each trip into the city was costing us about $5-6US. I kept thinking, “affordable for us but what about everyone else who has to live here?” With remittances at an all-time low because of the global recession (well, most specifically, the US recession), gas prices will continue to negatively impact Salvadorans, just like most other developing countries.

My biggest concern is how safety will continue to have a huge impact on how women travel in El Salvador. Obviously, income will ultimately determine whether a woman will end up in a car or a dilapidated bus. All I know is that I will stop complaining every time I have whine about driving my car or taking the Line 2 bus.