The making of Mondragon from the 1950s to the first time I visited in the 1980s is an inspiring example of collective entrepreneurship. Although the cultivation of that experiment is rightfully credited to the remarkable vision and mentorship of Father Arizmendiarretta, there was plenty in the DNA of the Basque region, history, and people that may have supported its success. The Basques are among the oldest people in Europe, with a unique language, unrelated to any others. They have a strong sense of culture and solidarity, were the first to join the resistance to Franco’s fascist regime, and then suffered suppression of their language, culture and economy under that same dictatorship.

By the 1990s, however, while the Mondragon cooperative system was by many measures very successful, a concern emerged about the fact that 85% of their cooperative companies had been created in those first thirty years ––a single generation had created 85% of the system. The system responded by taking up the challenge of recreating the original entrepreneurial spirit and capacity that created Mondragon. 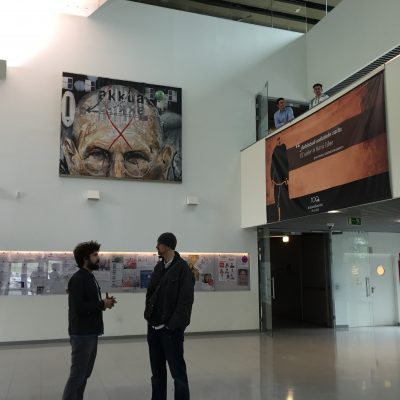 Among their many efforts in this regard was the creation of the Mondragon Team Academy,  a university-based undergraduate degree program in entrepreneurship, (or as they prefer to say, “teampreneurship”) that was created in 2008 in partnership with the Tilmiakatemia in Jyväskylä, Finland, based on their teaching and learning methods.

According to Team Academy faculty member, Liher Pillado, who led our Praxis Peace Institute tour and conversation with student team representatives, “Finland is a front-runner in [entrepreneurial] education.” The purpose of the Mondragon program, as stated on their website is “to transform (the environment) through team entrepreneurship based on active learning and cooperative values.”

Liher explained that key features of the Mondragon Team Academy are:

From day one of their degree program in “Leadership, Entrepreneurship, and Innovation,” students are placed into initial teams of 15-17 people that are constructed around the diverse strengths and personalities of individuals based on the team role theory model developed by British psychologist Meredith Belbin. They stay in these teams for their four year college career and create companies that earn money from customers (the goal being gross revenue of about $5,000 euros by their fourth year). Companies have their own office space, business cards, bank accounts, and are legally registered.

Team Academy students receive faculty coaching and take core classes such as math, law, economics, business, English, and computer science for no more than three months of the year (about 15-20% of their time). Students are also required to read and report to their teams on 20-30 books a year (there is a point system) of their choosing selected from a list of 1,000.

But most of their time and learning occurs through the trial and error entrepreneurial activities of their team company, which is encouraged to build enterprises that are based on shared passions. The team company is the center of all learning. There are no individual grades, but rather 360 degree team evaluations that are based on the university’s “Rocket Model” of evaluation that includes company learning, team learning, and individual learning with different competencies under each category that the student must achieve over their four years in the program. The understanding is that results are team-based, depending on the skill and responsibility that members apply to lead each other. 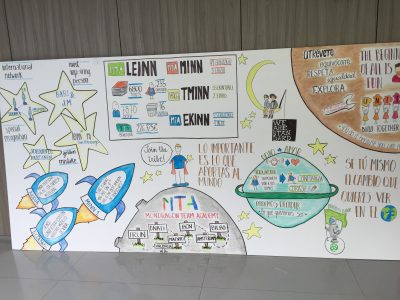 Team Projects, based in individual companies, function both as learning environments that build an individual’s competency as well as a method for creating enterprises. Projects vary in size from small project teams of 2-3 people to one that may involve the entire team (which usually ends up being 12-13 people)

A typical small project first step is to raise money for the company by taking on smaller entrepreneurial activities in small groups. Students and faulty coaches consistently referred to this initial fundraising as “milky money” or “milky projects.” (in English, with references to “fast cash” and “cash cow”) and gave examples of events, raffles, car washes, and small entrepreneurial activities. One small company was grounded in a shared passion for music and set as a goal to produce a three-day music festival.

In this way students learn how to be engaged in parallel activities at the same time, with the idea that companies typically have parallel projects and/or products going on at the same time. All income is generated from real relationships with real customers. Teams share a bank account and make decisions together about where to invest the money that they have earned, building towards larger projects.

I had lunch with several Mondragon Team Academy students, including first year student Sara Odriozola Azkue, co-founder of the TEWO “company”, who, over the course of our conversation explained how team dynamics work. Sara emphasized the importance of diversity of personalities and skills on her team and the different kinds of team leaders that emerge as a result (such as team vision, customer leaders, financial leaders, leaders of internal and external communication) that teams consist of very different people. 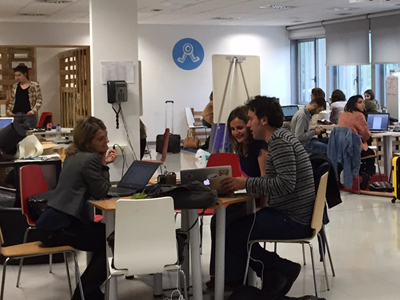 Teams meet face-to-face twice a week for four hours to touch base, trouble-shoot, and coordinate. These meetings serve to keep the team moving forward as a team and help build a shared way of getting things done.

Values are always a living question in student teams. One of the first thing new teas do is to create their own set of values and identify their passions. Examining and re-examining values is an ongoing endeavor. Each team reflects on its own mission, vision, and values 3-4 times a year and the entire community of 300 students come together to talk about shared values once a year.

All students participate in three “learning journeys.” The first one occurs in Europe (Finland, Holland, or Germany) and connects to what it means to create businesses within the European Union. The second is to Silicon Valley in the U.S. where the focus is primarily on new social, digital, and design businesses. And the third “journey” occurs in one of the emerging “BRIC” countries (Brazil, Russia, India, and China) which are considered emerging “advanced” economies, in order to learn about the obstacles and opportunities that those countries have in producing businesses there.

54% of Team Academy students continue with the (cooperative) businesses that they created. 37% end up working for existing companies (some in the Mondragon system, some not) –– some get hired by their customers, which may be businesses themselves.

Finally, Mondragon Team Academy is itself structured as a cooperative with a General Assembly and a Governing Council that consists of student, faculty and staff, and “collaborator” (typically partnering cooperatives, companies, and the local municipal administration) representatives, all with equal votes.

Here is a video of Liher Pillado, Mondragon Team Academy coach, speaking at a Praxis Peace Institute conference. (Liher starts speaking about 1 minute into the video.)