Mondragon: How Do You Become a Member? 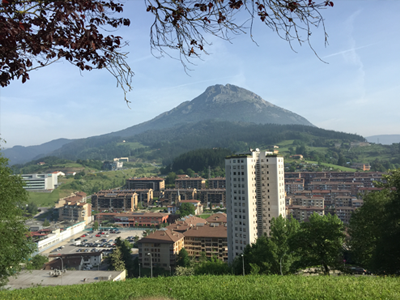 I’m in Mondragon, Spain on a study tour with a dozen others, organized by the Praxis Peace Institute. It is day one and at least thirty years since I have visited before, and while much has changed, much has stayed the same. At that time, there had been a spike of U.S. interest in worker cooperatives in the wake of the 1980s plant closures that virtually wiped out U.S. core industry union jobs in auto, steel, rubber and more. The recent economic violence of the global financial crisis has evoked even broader interest in the possibilities for an economy that is built on more democratic values and relationships than the ones that have produced so much inequality, exclusion, and damage.

We began our day at Mondragon headquarters which is located high above the Mondragon valley, looking down at an aerial view of the remarkable system of 103 worker cooperatives and attendant systems of support which employ 75,000 people in this Basque region.

The big take-away of the day was this idea of a value-driven system in action, or as Mondragon’s tag-line suggests “Humanity at Work.”

Most of the day was spent with our guide, Mikel Lezamiz, Mondragon’s Director of Cooperative Dissemination, a 34 year veteran of the place. Mikel’s Mondragon career began with a job in the Fagor cooperative’s domestic appliance division – one of the first cooperatives of Mondragon’s 60 year history. He then worked in the entrepreneurial division of what was then called the Caja Laboral, the bank that seeded cooperative development. He attended the same Polytechnical school that created the knowledge and skill capacity for Mondragon’s first cooperatives back in the 1950s and was able to study there for three years with Mondragon’s visionary founder, Jose Maria Arizmendiarrieta. 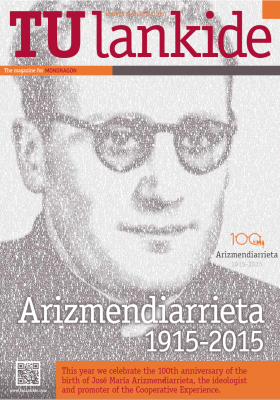 Mondragon is celebrating the centennial of his birth.

There is a lot of descriptive material available about Mondragon’s history  and principles.  Mikel also offered a general overview of the relationships between cooperatives and the system’s supportive infrastructure of education, mutual health and welfare, finance, and research and development that together, comprise Mondragon’s economic ecosystem. I’ll describe this more in a later post.

But for today, I think the best place to start is with a fellow traveler’s question: “How do you become a member?”

Embedded in the answer to that question is basic information about how individuals join a cooperative, what is fair for pay, and why Mondragon has low turnover in its workforce.

First off, its important to know that the Mondragon is comprised of a system of primarily industrial cooperatives that share inter-cooperative relationships between each other as well as with supporting (and cooperative) institutions of education, social welfare, finance, and research and development. Many of the cooperatives have been in existence in some form or another for half a century.

The path to becoming a member of one of the cooperatives begins much like any other employment relationship – a position must be available, and the individual needs to be the right person for the job, as well as pre-disposed to cooperation. Once that is established, the worker is hired into a six-month contract as a temporary employee, much like the provisional period for many employees in a conventional enterprise.

Depending on the proven suitability of the employee for the job and the availability of long-term work in the company, a good employee may be proposed for membership, or in cases where long-term work is not yet available, offered a renewed contract (for no more than three years). In some cases, “unsuitable” workers, who just don’t work out, may be asked to leave.

The membership process begins with the employee’s supervisor, who proposes the worker to the company’s personnel manager. The personnel manager creates a profile, (which in some cases may include a written statement by the prospective worker-owner about why they would like to be a member) and submits that package to the enterprise’s Governing Council, which is made up of elected representatives of the company’s membership. The Governing Council makes the final decision to offer the worker a membership position.

At any given time at least 80% of the workers of any Mondragon cooperative must be full-fledged members.

Once membership is mutually accepted, the worker has 36 months to contribute his or her initial capital share of €15,000 , which represents the system’s minimum annual salary. This can be amortized through salary deductions, or in some cases borrowed from a bank as “capital to work.”

Membership places workers in particular social and economic relationships with each other and the cooperative. Workers start out with the same salary for the same job, with raises for seniority kicking in every 3-5 years, depending on the cooperative, and retirement is compulsory at 65 years.

Principles of internal and external solidarity place restrictions on the distance between the highest and lowest paid workers, building from the basis of the €15,000 minimum salary. In most cases, no worker can earn more than 4.5 times that base amount (€67,500). In the largest cooperatives, where management responsibilities might be very high, the wage ceiling is six times the €15,000 base (€90,000).

Needless to say, no one gets rich working in a Mondragon cooperative.  However, turnover is very low because:

Next: What is Solidarity?