Everyone agrees that Chicago Public Schools have to change. Yet there are fierce disagreements over what kinds of changes must be made, who should lead that change, and how it should be administered. At the helm of the warring parties are Karen Lewis, the new president of the Chicago Teacher’s Union, and Ron Huberman, the CEO of CPS installed by Chicago’s Mayor Daley.

These two opposing leaders are fighting a serious battle, one that will determine the extent to which public schools remain publicly owned and operated. It is a fight with tremendous implications, ranging from the future of charter schools in the City of Chicago, to how success is defined and evaluated. 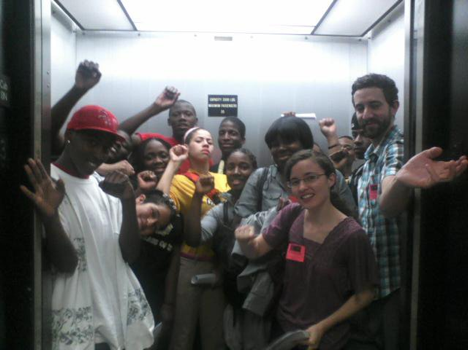 In the backdrop of this battle, there is another struggle going on in Chicago Public Schools. This is the fight to protect the life of Chicago Public School students. As a recent New York Times article identified, 218 CPS students were shot in the last school year, and 258 the year before. The article, provocatively titled “Graduation Is the Goal, Staying Alive Is the Prize,” highlights efforts to improve the safety of simply attending public school. They focus on an unfolding intervention strategy which targets the most “at-risk” students and connects them with adult mentors and support services. Created by CEO Huberman, a former police officer, this $60 million intervention is also geared to strengthening communications between the police and school administrators. While this intervention brings in deeply needed resources, the police dimension of the program strengthens a disciplinary approach that relies heavily on law enforcement to run daily operations at schools.

The school-police partnership has gotten more intense in recent years, so much so that several high schools now have their own police station outlets established within their walls. Many grassroots leaders and youth are critical of the over-reliance on police to change school culture. They assert that bringing police into public schools feeds the school-to-prison pipeline, and that it distracts from what the real goal should be – training students, parents, and teachers to be a part of the solution. Many officers within the Chicago Police Department also see working in schools as a distraction from other priorities, and believe that schools should maintain responsibility for the safety of their students.

As an alternative to bringing more cops into schools, organizations like Blocks Together and the Community Justice for Youth Institute are busy building new approaches to shaping school culture. Through their persistent organizing efforts and creative visioning, the youth council at Blocks Together recently got the head of Safety and Security at CPS to pilot a new program for security guards, one that would train them in the methods and values of restorative justice. Blocks Together organizer Ana Mercado says the program will train security guards “to approach situations as problem-solvers and mentors instead of mini-cops. The Restorative Justice philosophy, which is already being used in peer jury and peace circle programs all over CPS, can help them go through that transformation.”

At Fenger High School, on Chicago’s far Southeast Side, an innovative program involving the Community Justice for Youth Institute integrates peace circles, public art, and personal genealogy. This program has helped to catalyze a school culture rooted in knowledge of self and right relationships with others. The school that survived the lethal beating of its former student Derrion Albert last year, Fenger has been moving from tragedy to transformation. With the support of the principal, youth and community leaders have been trained in non-violent approaches to conflict resolution, have looked into their family histories, and have represented their stories through a vast mural project. When things get tense among the students today, students have been known to stop by the principal’s office asking for a circle, and there is serious talk of creating a “peace room” in the school.

Initiatives like the campaign led by Blocks Together and the training support by the Community Justice for Youth Institute are helping to plant the seeds for more system-wide changes. They help to show how a greater number of stakeholders can get involved in peacemaking efforts, and how school police stations can be replaced with peace rooms. Yet efforts like these are only as stable as the schools where they take root. While CPS leadership determines which schools stay open and how they are evaluated, students will continue to balance the quest for survival with the quest for academic excellence. As powerful teachers, politicians, and business leaders fight over the schools system’s future, they must do so in a way that honors the real potential for peaceful schools, and the overwhelming need to involve students and parents in the shaping of their own destinies.