Big time developer Ed Roski Jr. has plans to bring professional football, and by that I mean American smash mouth football, not soccer, back to the Los Angeles area.  He’s got a lot of, er, yardage to cover given the cost of such an endeavor (he says he can do it all with private monies), the players and owners may be locked in a money dispute come 2011 and other factors are at play.

Fans of Dr. Pop might not know this or care much, but the last team to wear with pride the title of “Los Angeles” in front of a franchise’s name was the former and current Oakland Raiders.  They played here in the Coliseum in South Central from 1982 to 1994.  Back then, the Raiders were actually a good team and had won Super Bowls 11, 15 and 18, the last one in L.A.  They suck mightily now, but such is not the point of this post.

Roski, CEO and chairman of Majestic Realty Company, a massive commercial developer and one of the individuals who had a hand in the building of the Staples Center, would like to construct his proposed Los Angeles Stadium (including retail shops and office space) on 600 some odd acres of land near the intersections of the Pomona (60) and Orange (57) Freeways in the City of Industry.

I’m not sure what Mr. Roski has promised the sons and daughters of Industry (for more about this interesting enclave southeast of downtown Los Angeles incorporated in 1957, read Victor Valle’s recent hard-hitting book, City of Industry: Genealogies of Power in Southern California) in terms of what he projects the stadium would generate insofar as taxes and local revenues are concerned.

For as detailed in books like Field of Schemes by Neil deMause and Joanna Cagan and Public Dollars, Private Stadiums by Kevin J. Delaney and Rick Eckstein, pro sports stadiums don’t exactly return what municipalities put into them in economic terms.  Certainly there’s some local employment in the concession and parking booths of the stadium, and there can be spill over to local restaurants and bars in an area, but it’s the players and owners getting the beaucoup bucks off the gate and swag like T-shirts and caps. 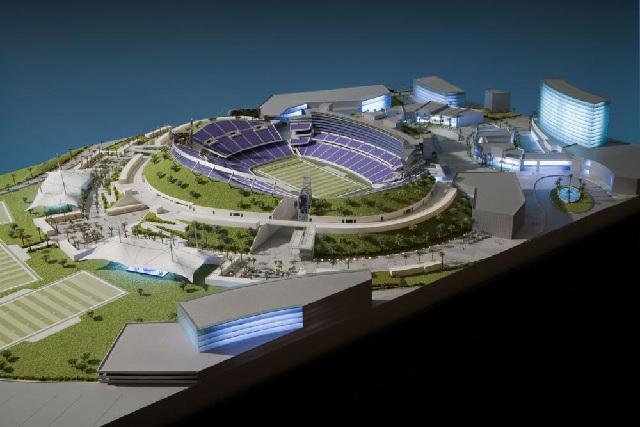 Intellectually I know this and I’m down with poor and working class people not getting the short end as invariably happens when these grandiose plans for stadium complexes get hatched.  But there is an allure this sport continues to hold over me after all these decades down the line and playing football on a minor scale in high school.  Is football and by extension all organized sports the opiate of the masses?  A way to divert us from our real issues while we pay good money to fat cats who pay large men to collide with each other or sinewy women to hit tennis balls back and forth across a net.

But isn’t it also the case that sports figures like Muhammad Ali, Billie Jean King, Serena Williams and even the now maligned, but in the redemption trail Tiger Woods have, if only through their prowess let alone those who’ve dared to speak out, been role models for minority youth – particularly Williams and Woods who have dominated in sports traditionally though to be the province of whites?   At its core, stripped of the hype and glitter, sport can teach us something about camaraderie, discipline and provide self-esteem.

Or maybe Zelmont Raines, the main character in my noir novel The Jook, about a self-centered pro football player back in L.A. for one last shot at the marquee summed it up best:

I was eleven and played Pop Warner just for the love of the game.  Before the scouts, the slaps on the back, the classes you were allowed to skate through, the coach in high school making his dreams yours, the alumni big wheels, the agents, the hangers-on.  This was what the sport was all about, you and the ball and the goal line.