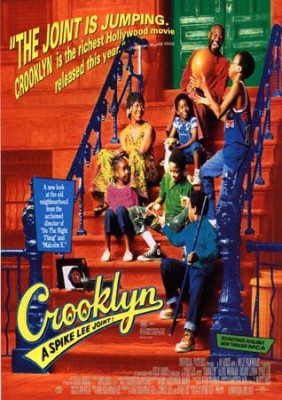 One of my favorite movies growing up was Spike Lee’s Crooklyn (1994). I still remember when I begged my parents to let me go to the movies by myself at Universal City walk while my siblings went to go check out an action movie. The movie still continues to be one of Spike Lee’s most underrated movies, probably because it was one of his first films without blatant race commentary. It is nonetheless an incredibly poignant story of a working class family living in Brooklyn, of course, and life on the stoop—the centerpiece of urban life in New York City. You have the neighbors who think they’re too good for life in the ghetto (yet they live in the ghetto); kids playing and teasing each other; and various odd characters that may or may not be up to no good.

The main character, Troy, a tough girl with four rambunctious brothers, was and is someone I could relate to as she’s always trying stick up for herself both inside and outside the home. She also seems to be the one most aware of  the financial problems of her parents, who are constantly fighting about not making ends meet.

As a kid who didn’t know much about how folks live outside the city, one of the most interesting parts of the film is when Troy is sent to stay with family in the South. The South is a whole other world for Troy–structure, order, and definitely no stoop. When her aunt Song, criticizes the way her mother does her hair, Troy goes from having braids to getting her hair pressed for the first time. Her experience in the South becomes part of a major turning point for Troy as she soon finds out that her mother is ill and then must return to Brooklyn.  Troy then steps up as the matriarch, not realizing that she’s forcing herself to grow up without mourning her mother’s death.

Despite the hardships the children face–poverty, instability, the loss of a parent–Spike Lee manages to still remind us that while things although might not always be perfect, let alone easy, life in the city does not have to be tragic.