In Words and Pictures 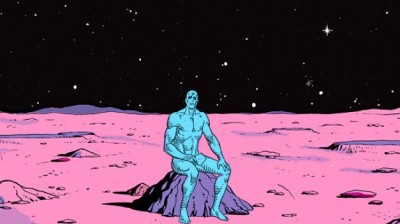 Graphic novel is just a shorthand way of saying a comic book in long form. It sounds more grown up to say graphic novel than comic book because, you know, comics are for kids.

In an article on CBSNews.com, Terry Moore, the artist-writer-publisher of the Strangers in Paradise graphic novels, a blend of Friends meets the political thriller, and Echo, a sort of female Iron Man (which has been optioned for film), said:  This is a really great industry to find America’s best short story writers right now because where else are you going to find them?”

Well you could find short stories where they’ve always been, in prose anthologies and on the newsstand in the monthly Ellery Queen Mystery Magazine or literary rags, but his point has a certain resonance. That is given graphic novels are these days available in their own sections in Barnes & Noble – form as genre — and can be checked out from your local library. 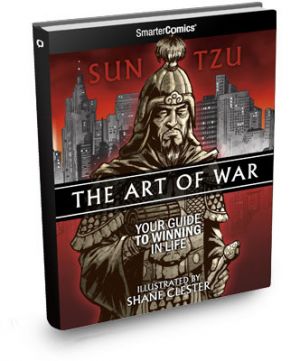 While the doings of super powered masked beings remains the mainstay of comics in monthly pamphlets and in graphic novels, plenty of other types of fare can be found in sequnetials – comics pages – as well. For instance there’s the recent The Art of War, by writer Kelly Roman and artist Michael DeWeese, wherein Sun Tzu’s classic text on strategy — its reading all the rage some years ago among would-be Ricky Romas – is used by a protagonist in a near future where China is the world’s dominant economy to infiltrate a globe-spanning organization. Then there’s Special Exits, where writer and artist Joyce Farmer uses the form to tell the true story of her caring for her ailing and elderly parents – her mother Rachel having gone blind. From action-adventure to the crushing foibles of reality, graphic novels cover a wide range.

The modern graphic novel is often attributed to writer and artist Will Eisner’s A Contract With God and Other Tenement Stories, published in 1978. Eisner had been a long-time comics creator having created or co-created and drawn such characters as the aviator Blackhawk, Sheena, Queen of the Jungle (the first female comics character with her own title), and the indomitable the Spirit. He was Denny Colt, a domino masked, suit-wearing no super-powers detective-type in Central City whose exploits were illustrated by Eisner using film noir techniques such as oblique angles and oddball characters. In Contract, Eisner calls on stories and imaginations from his childhood, this son of immigrant Jewish parents, to tell four stories of characters in the Bronx of the 1930s on the made-up Dropsie Avenue.

Comics aficionados site It Rhymes With Lust, published in 1950 as a novel with pictures as one of the first graphic novels. Written by Arnold Drake (who would go on to create the Doom Patrol and Deadman for DC Comics) and Leslie Waller and drawn by Matt Baker – a pioneer of sorts as a black comics artists in the ‘40s and ‘50s – It Rhymes is a hardboiled tale where tan intrepid reporter takes on his femme fatale ex-girlfriend who has taken over their town’s rackets.

When Art Spiegelman’s graphic novel Maus, with imprisoned German Jews as anthropomorphized mice and the Nazi’s as cats, won the Pulitzer in 1992, some of the stigma of the form had been lifted – or at least altered. Though prior to that the 12-part Watchmen comic book mini-series, collected into a graphic novel, by Alan Moore, writer, and Dave Gibbons, artist, garnered some love outside of geekdom as well when it was initially published in 1986 into ‘87. 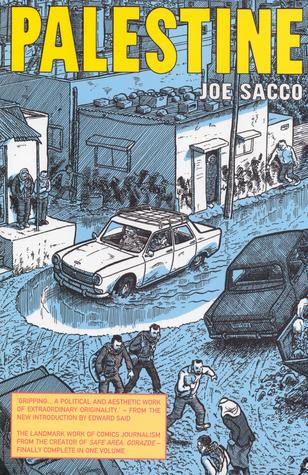 In a slightly altered universe, America wins the Vietnam War with the help of its super heroes, particularly Dr. Manhattan, who can alter any atomic structure at will – though is losing more and more of his humanity in the process. The brutal beating death of one of the costumed heroes sets the plot in motion as the hunt for the killer by the singularly-minded Rorschach reveals a Machiavellian-inspired plan to derail the path of mutually assured nuclear destruction the U.S. and the Soviet Union are about to launch. Various filmmakers, including Terry Gilliam (Brazil, Fear and Loathing in Las Vegas, etc.) and Darren Aronofsky (Pi and The Wrestler) attempted to get a Watchmen movie off the ground to no avail until in 2009 it was directed by Zack Snyder and written by David Hayter and Alex Tse.

From Marjane Satrapi’s Persepolis about a young girl growing up in Iran during the Islamic revolution, Joe Sacco’s semi-documentary collected sequentials about his time spent in Palestine, the late underground artist Spain Rodriguez’s Che bio (who’s Trashman was given some ink previously here on Dr. Pop) to the collect Spirit strips by Eisner, a casual reader might take a change on a graphic novel given its physical heft and slightly higher status than a stack of funny books. For now, there’s a certain cool quality to a graphic novel that can be more than just a punch ‘em up super hero tale – it aspires to say something in words and pictures.