How to Walk the City 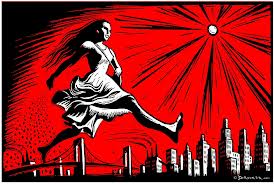 I stole the title from Michel de Certeau, and this isn’t a how-to exactly, more of a how do we, how can we? These days I feel like most of my skills have been swallowed up in endless research and writing. So I thought I would find inspiration today, and write about how we can experience the city.

Michel de Certeau writes “The ordinary practitioners of the city live “down below,” below the thresholds at which visibility begins. They walk—-an elementary form of this experience of the city; they are walkers, Wandersmanner…”

It feels elementary, to walk the city. In a place like London you step into a certain anonymity as you step out of your own space. You make your way through the city thereby creating space, creating the city, one of a thousand thousand others also walking, also inhabiting and creating. This is how we create space through our lives, use the city in ways never expected by those in authority and best of all, in ways they can’t see.

Look around, breathe, experience, drink it all in, think deep thoughts, soak up atmosphere, talk to strangers.

Let the city build itself in layers. Every time you step outside you learn something new. I know I’m lucky to live here, where everything breathes of all the people who have walked here before me. Our steps intertwine, even if our lives do not. That means…

Research. Ha. You knew I wouldn’t go on any kind of adventure without doing research! Before and after. Pick a few places that seem interesting and then wind your way there…today I had to go take some pictures for a Lambeth SOS blog in the run up to our big demo next Wednesday on the council budget and the latest round of cuts.

I started at the Thames, Big Ben and the Parliament buildings, the Lambeth bridge. Lovely. And I didn’t know it then, but if I had left the Thames river path to turn right down Black Prince Road, I would have been tracing the Black Prince’s (1330-1376) steps from the pier on the river to his favourite palace where Kennington cross now stands.  I might have done it if I had known, but instead I meandered along back roads to Black Prince Road.

I went through Pedlar’s Park…or tried to. On my way to one locked playground empty of children, I found another: Lambeth’s website says ‘The park is named after the ‘Pedlar of Lambeth’ who, legend has it, donated 1 acre of land for the nearby St. Mary’s-at-Lambeth Church, which is now the Garden Museum; the ‘pedlar’ is depicted in a small stained glass window in the church building.’ The Garden Museum is lovely, I went there on another wander and it has the most amazing tomb in all of London, that of the Trandescants, gardener adventurers and surely the inspiration for the Jolly Gardeners pub. They owned lands here and started their own museum called the ark. That is gone, and look at how the place has changed. From there I came to Black Prince Road The red brick building on the right is where the old Royal Doulton pottery was, only a corner of the old, beautifully tiled and intricately decorated building is still left. No one paused to look at it, people walked by with heads down. There is a tableau over the door that shows potters at their work, and this whole area was once known for pottery, employed a thriving local community. This building corner is what remains. It seems as long gone as the Black Prince on his lonely ride to his estates, memorialized by a street name, and he and Royal Doulton remembered through tiles under the bridge.

I turned right down Lambeth High Street, I expected it to look something like the main street of the old village of Lambeth. Instead I found this History wiped away. Council housing to the right, built after WWII and now under threat of itself being wiped away, along with everyone who lives there. This is now prime real estate. At the other end is what is now called Lambeth High Street Recreational Park Ground, once a cemetary, but the tombstones have all been plucked up and set along the edges. Only the body stones remain From there I turned right into Old Paradise Road, but really it was anything but All new build. It is a relief to get to Lollard Street Park. I couldn’t find how it had gotten the name, the Lollards were a dissident religious group and I read that many were hanged in the area, I can only assume here.

Here also is a beautiful adventure playground. One of four closed by the council after it tried to privatise them, handing them over to a company later charged with abuse. In looking for more information I had found these amazing photographs of Lollard Street, they are what brought me here. This was the birth of the adventure playground, a whole movement to create these incredibly places for children to play. For years this was a fully staffed facility of fun, learning and mentoring And now it is closed. Indefinitely. Empty of children for the first time in 60 odd years. In the old black and white photos you can see the houses of parliament in the background, you can still see them today. You can stare over a playground empty of children and committed workers at the parliament (dead center, just visible over the building, compare it to the second B&W picture!) that shut it all down, though it was our own council that carried out the chop without a hint of struggle. There is so much to see, to know, to experience. We create the city as a lived space through our everyday lives, but if you know to look, to read, you can see all of the different people who have come before. At least, you can see them where modern development hasn’t wiped away all trace. In parts of London all that remains are street names. If you are involved in community, in movement, you know other stories. Why there is a padlock on parks now that all the park rangers have been sacked, now that the playground budget has been cut by over 70%. You know the ongoing struggle to preserve both history and rights to land, to services, and to play.