How to Be an Awesome Reporter

A Conversation with Angela Caputo

Angela Caputo is an award-winning journalist with years of experience. Yet in many ways, she feels like she is just getting started, just beginning to learn the ins and outs of her craft. Despite her humility, she has gained a reputation for some of Chicago’s very best reporting on issues of race and poverty, focusing on the criminal justice beat since joining the Chicago Reporter in 2010.

In the following conversation, Angela talks about one of her superpowers that makes her an awesome narrator of the city and shares what it takes to gather and deploy large amounts of data.

How did you learn to work with data? At what point did that happen?

During my early reporting jobs, I did very little work with data. While at one of my first jobs, I remember going through files at the County Clerk’s office and reviewing them one tax payment at a time, calling them up by pin and logging them into a spreadsheet. It was very different than getting huge sets of data and doing analysis.

Most of my learning happened after joining the Chicago Reporter –– now I work with datasets that contain literally hundreds of thousands of entries.  It is a big part of what our publication does.

I have learned a lot in the office. We teach each other what we know, and then just kind of muddle through projects. That’s really how I’ve learned. Somebody will introduce you to something, but the only way to learn it and get better is to make a lot of mistakes and to practice.

When you get a big database, how do you make sense of it?

Just playing with it, decoding it, cleaning it up, making sure that you’re not counting duplicates, figuring out the categories, breaking out the variables so that they line up into one thing. Simple data cleaning, getting rid of parenthesis, crunching it down to basic numbers, so that you can really compare the same thing. That’s all part of the process.

What’s an example of a really cool dataset?

One example is LEHD data, [Longitudinal Employer-Household Dynamics], which is really amazing. It has a geocode, which links it to a place, and it goes down to the census block, so it zooms in pretty deep. That data shows you what jobs are on each block, and where the people in those jobs come from. You can see how old the people are that work in the jobs, what they make, and the type of sector that they work in.

I used that data in a story on jobs and economic development in the heart of Chicago, in the downtown area, where one in 3 jobs in the city are located. There has been huge public investment in the downtown, so I looked at who is working there. I found that 86% of the job losses between 2002 and 2008 were among people who live south of 41st street.

The communities that already have the fewest number of jobs per resident; also lost almost all of the jobs that were lost in and around the Loop.

How would you describe the process of getting data?

It’s a fight. It typically begins with FOIA [Freedom of Information Act request] and staying on top of things. It can also involve appealing to the Attorney General and threatening lawsuits. It’s like a part-time job just fighting to get the data, before you can do anything with it. Several datasets have taken me a year to get [because] you are trying to get data that people don’t really want to make available.

Do you enjoy the fight?

I do. It’s kind of fun to go toe-to-toe with somebody who is trying to keep you out of something. It’s in the public interest, so it feels like a real accomplishment, especially when you are illuminating something for people who make decisions about it. That’s a big part of what we do at the Chicago Reporter, we are trying to inform public policy.

What advice do you have for people that may be submitting their first FOIA?

Stay on them, don’t take no for an answer. And ask somebody who has experience in FOIA before you submit it, because a lot of times people get denied because they submitted a bad FOIA. If it’s not a good solid request, then it’s easy to shoot down.

Also, be really specific. Often times I do research about what I am “FOIAing.” I have to really figure out: How does an agency maintain information? What do they have available? What do people have to file?

Once you have data, how do you make it come alive?

I am always looking for a person who can help me to understand the data through their own experience, to tell the story through them. Then different elements of the data start to feel important, it reveals what matters. [Once you know the story], then you can show how many other people are in the situation

When you get really into data, it’s never just about one dataset. It’s about combining data and making it relevant. I just did a piece about high-incarceration blocks in a neighborhood; it’s coming out March 1st. I started with one dataset, but without mapping software there’s no context on where people are coming from. Then I looked at the LEHD data- How many people actually work in that neighborhood?

Every time you get information, it’s just a starting point. That’s why I never feel like I am complete with a project.  You could go forever.

But my editor says “You are done; it’s over, good enough.”

CHECK OUT SOME EXAMPLES OF ANGELA’S REPORTING:

Angela’s Chicago Reporter “Cell Blocks” articles about the human story behind the facts of Chicago’s most crime-ridden neighborhood inspired a partnership with NBC News resulting in the following video:

Angela’s Chicago Reporter “Road to Ruin” article spells out the real costs of Illinois’ increasingly harsh drug laws.  The article includes useful infographics as well as the clear description below of her research methods. 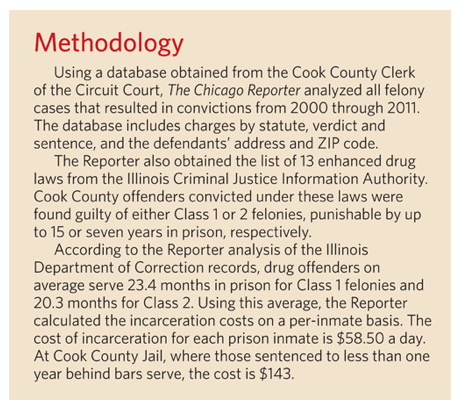