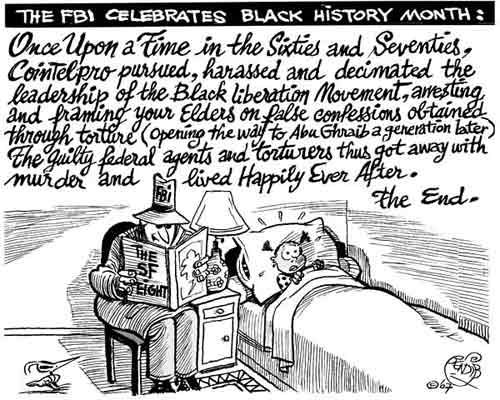 Winston Churchill once  said that history is written by the victors.

For centuries, the histories of Africa and Latin America were told via the pens of their European colonizers.  In the wake of often-armed political struggles in those aforementioned regions, college campuses in the 1960s stirred with struggles to establish ethnic studies programs to reclaim the truth from lost and falsified histories.  Ethnic studies not only illuminated that which had been denied, but also created pride and self-esteem within those American of color who may well have been ignorant of their own pasts.

My own eyes were certainly opened when (get this) one of our white teachers taught a black history class at Lutheran High School.

Understand that Lutheran High was and still is part of the Missouri Synod, a rather conservative branch of a religion that demands silent suffering and hard work.   At my middle school (I’d gone from public grade school to Ascension Lutheran for what we called junior high then) Pastor Meyer taught black and white kids German.  ‘Cause you know, Martin Luther’s texts were in German, so you had to bone up so to get the real deal on the Reformation.

When ol’ Pastor Meter (who used to scare the hell out of us, as was his goal) would hold his hands aloft and preach about God’s awesomeness, he was hip to Churchill’s words.  If you want the truth, you better go to the source and read it for yourself.

But even then, some sources are (in an Orwellian by way of Steven Colbert sense) truthier than others.

In the  history textbooks currently used in the Texas public school system, the impact of slavery has been, shall we say, de-emphasized.  After all, this is the state where the slave owners “forgot” to tell their slaves they were free after the Civil War.  In the same state the conservative Texas Board of Education recently banned the classic children’s book, Brown Bear, Brown Bear, What Do You See? on the grounds that the author may have also written a paper extolling Marxism.

It turned out to be two different people with the same name.  But as the Texas ACLU has noted on their website:

This week, the Thomas B. Fordham Institute (an education think tank) released its State of State U.S. History Standards for 2011. How did Texas perform? Not well. The Fordham Institute concluded that Texas’ new Social Studies curriculum “combines a rigidly thematic and theory-based social studies structure with a politicized distortion of history. The result is both unwieldy and troubling, avoiding clear historical explanation while offering misrepresentations at every turn.

As the ACLU of Texas documented last spring, Texas’ failing curriculum is the direct result of a process that allows members of the Texas State Board of Education to inject their personal political beliefs into the curriculum content.

I don’t actually know if the so-called authoritative textbooks in Texas have us living like the Flintstones, barbecuing dinosaur meat, and espousing the Creationist belief that civilization is only 6,000 years old.  It sounds outlandish, but if that is what a child is being taught in the Texas school system –– maybe a child who lives in a home where reading isn’t encouraged –– then how do children learn the truth?

Or at least counter-viewpoints based on scientific research?

In Arizona the public schools banned Chicano studies last year.  This initiative was particularly aimed at eliminating these programs in Tucson.  Supporters of the action argued that the classes were designed only for students of a particular race and that they promote ethnic solidarity over community integration. According to the bill, “Public school pupils should be taught to treat and value each other as individuals and not be taught to resent or hate other races or classes of people.”

A recent audit performed by Cambium Learning, Inc., commissioned by the Arizona education officials to evaluate the now-banned programs states:

No observable evidence exists that instruction within Mexican American Studies Department promotes resentment towards a race or class of people. The auditors observed the opposite, as students are taught to be accepting of multiple ethnicities of people. MASD teachers are teaching Cesar Chavez alongside Martin Luther King, Jr. and Gandhi, all as peaceful protesters who sacrificed for people and ideas they believed in. Additionally, all ethnicities are welcomed into the program and these very students of multiple backgrounds are being inspired and taught in the same manner as Mexican American students. All evidence points to peace as the essence for program teachings. Resentment does not exist in the context of these courses.

The 1976 film Burn! was directed by lefty filmmaker Gillo Pontecorvo (who also made the Battle of Algiers, a documentary-like feature film that was de rigueur viewing of the Black Panthers) with screenplay by Franco Solinas and Giorglo Arlorio.  In the film, Marlon Brando plays British agent provocateur Sir William Walker –– no doubt based, in part, on the American mercenary of the same name (sans title) who invaded Mexico in the 1850’s and later declared himself president of Nicaragua.

Walker’s task in Burn! is to use subterfuge to drive the Portuguese overlords out of a mythical Caribbean island nation called Queimada (there is an Ilha de Queimada Grande off the coast of Sao Paulo, Brazil) to control the sugar cane crop.  To this end, he hand-picks a dock worker named José Dolores to lead a supposed indigenous fomented rebellion against their colonial masters.  The insurrectionists win.  Jose Dolores, a celebrated hero. But Walker convinces the uneducated Dolores that he and his fighters are ill-prepared to lead the new government.  A figure head that Walker can control is installed instead.  But Dolores has come to a bitter truth.

If a man gives you freedom, it is not freedom.  Freedom is something you take for yourself.

Thereafter he regroups his army and launches an insurgency against the puppet government, his forces seeking to be the victors, hoping to write their own histories.