Heck of an Anniversary Heck of an anniversary to mark, this 20th year since the riots or civil unrest if you prefer jumped off that day on April 29 after the not guilty verdicts came in from Simi Valley.  Pretty much the only thing I knew about Simi Valley then was the year before the Ronald Reagan Library had been opened out there.  So when the trial of the four cops who beat Rodney King was switched to Simi, you had the feeling no good, from the black community’s standpoint, was going to come from such a change of venue.

But it wasn’t just the verdicts in the King beating, by happenstance caught on surreptitious video by George Holliday, that stoked the maelstrom to be.  Echoes of today and the shooting death of the unarmed Trayvon Martin in Sanford, Florida by self-appointed neighborhood watcher George Zimmerman, there had been another shooting of an unarmed black teenager before siegu [Hangul for 4/29], April 29.

On the morning of March 16, 1991, 15-year-old high school student Latasha Harlins stopped in the Empire Liquor Market Deli on Figueroa near Manchester to buy a bottle of orange juice.  She put the juice in her backpack, holding the money for the item as she came to the counter.  The 51-year-old Soon Ja Du, a Korean national, behind the counter assumed the girl was trying to steal from her store and they got into a heated argument.  Du grabbed at Latasha’s backpack and the girl struck her.  Latasha then threw the orange juice bottle on the counter and turned to leave, whereupon Du shot her in the back of the head killing here instantly.  Ultimately Judge Joyce Karlin would essentially exonerate Du, convicted of manslaughter but given probation and no jail time   Karlin faced a recall that failed – years later she would go on to serve on the Manhattan Beach City Council for two terms — and Empire was firebombed during the unrest.

That Wednesday of the verdicts the city held its collective breath.  I was sitting at my desk at the then as now progressive funder of organizing, the Liberty Hill Foundation in Santa Monica.  I was their outreach person then.   A few minutes after three that afternoon, listening to KNX radio, the news broke.  As the head shaking went though the office, executive director Michele Prichard sent the staff home.  Gilda was teaching Community Scholars at UCLA in a downtown office. Gilda would normally drive Robin Cannon home, a community leader in the class who lived in South Central.  That night, Robin asked not to be taken home and instead spend the night at our house. The nearby Vons in our Mid-City area on Pico at Fairfax was looted but prevented from burning by the workers and some neighbors.  Downtown at Parker Center of the LAPD, the late Michael Zinzun of the Coalition Against Police Abuse was in the demo there against the cops.  As chronicled by L.A. Weekly reporter Jim Crogan in their subsequent publication Inside the L.A. Riots, Michael stated, “The community has got to realize that an unstable black community means an unstable L.A.”

By the early hours a rough lull took hold but it wouldn’t last. The next day Gilda, me and the kids and our friends’ Dan and Kim and Kim’s two young sons (one of whom is a physician now) hunkered down in their duplex on Ogden.  The sequence of events are a bit hazy to me these days, but at some point a few of us were walking around the neighborhood.  We encountered this tough older lady who with her friends and her pistol in her apron, prevent some knuckleheads from torching the Texaco station.   My dad Dikes was alive then and living with us but away visiting relatives in Kansas City.

On Friday Gilda and the kids left for the Valley then Cambria to stay with friends. That morning I went with Sarah Cooper, the then director of the Southern California Library for Social Studies and Research, a lefty repository on Vermont in South Central.  I was on the Board and we drove down to the Library and were thankful it hadn’t burned.  It turned out Chester Murray, the Library’s handyman who lived nearby, had gone out bravely on the streets talking to cats he knew in the area and got them to leave the building alone.

Like any shaky petty bourgeois homeowner, I stayed, as rumors, including, I recall,  a flyer to this effect, that the Crips and Bloods would burn our neighborhood.  As I’ve previously recounted in a piece called “Destructive Engagement” for a collection of essays edited by my friend and fellow writer Jervery Tervalon called Geography of Rage released on the 10th anniversary of ’92, armed with a handgun and Jack Daniels for courage — a bad combination in any circumstance — I watched the news and guarded the homestead.  Saturday, sober, I went out to take pics in our neighborhood and a Japanese American photographer was also out and about and asked to hang with me so nobody would mistake him for Korean.

It would be nice to think that in 20 years, with the first and some might predict only black president of the U.S., that race and issues of abuse under color of authority were no longer factors in this country.  But if anything, recent news from Trayvon Martin, Kendrick McDade here in Pasadena – another unarmed black teenager shot, this time by the police – to the Supreme Court saying that it’s okay to strip search arrestees on minor charges, seems we’re going further back than forward.  The case arose concerning Albert Florence, who was riding as a passenger when his wife was stopped by New Jersey state police for speeding.  He was arrested on a warrant for an unpaid traffic ticket, which in fact had been paid.  He was strip searched twice while spending six days locked up.

Did I mention Florence is black?  Or how about Arizona banning Chicano studies books from the curriculum. 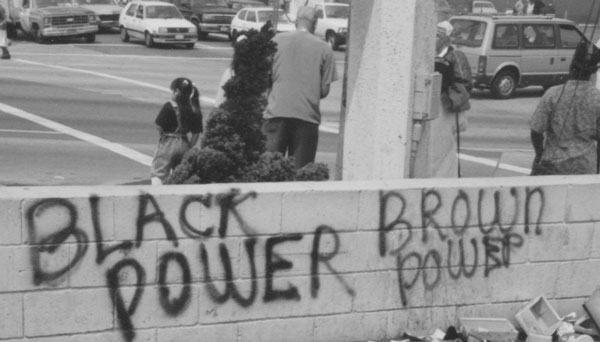 But let me end on a positive note; while looking up dates and such for this piece, I chanced upon an announcement for an outdoor listening party at USC in honor of the 40th anniversary of Marvin Gaye’s landmark What’s Going On album.  This event was sponsored by Professor Josh Kun, who also co-curated the well-done exhibit, Trouble in Paradise: Music and Los Angeles, 1945-1975, at the  Grammy Museum.

And so, I leave you then with the words of Marvin Gaye,

Don’t punish me with brutality

Talk to me, so you can see