This game has nothing to do with the Havana of Che, Fidel, or the Buena Vista Social Club.  “The revolution in Cuba is over. Now, many magnificent buildings are being built in the capital city Havana to make it gleam in renewed splendor,” explains the game.  And that’s the story. 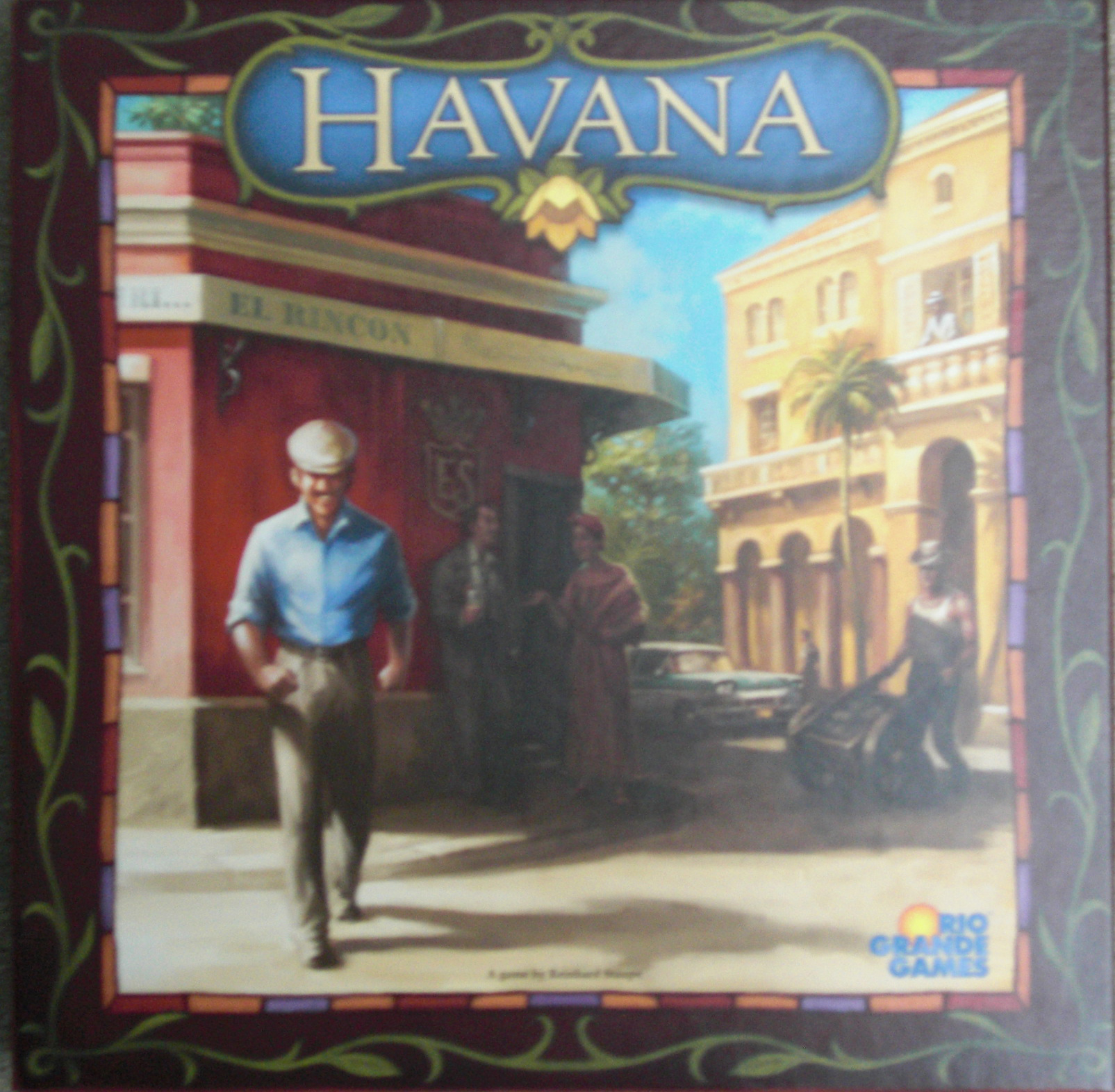 In the game, players collect building material, workers and pesos in an effort to produce the most valuable collection of buildings.  At the outset of the game, each player receives an identical set of 13 (cool-looking) action cards, which they can only play two at a time to get the resources (material, workers, and pesos) they need to acquire buildings.

Each card, however, has a different value.  More powerful cards have higher values.  Whoever starts out with the least valuable cards gets to go first and thus has the first shot at the buildings.

After each round, more money and material are put out, and a new round begins with each player replacing one of the two cards, discarding the other, and then the turn order is determined again. 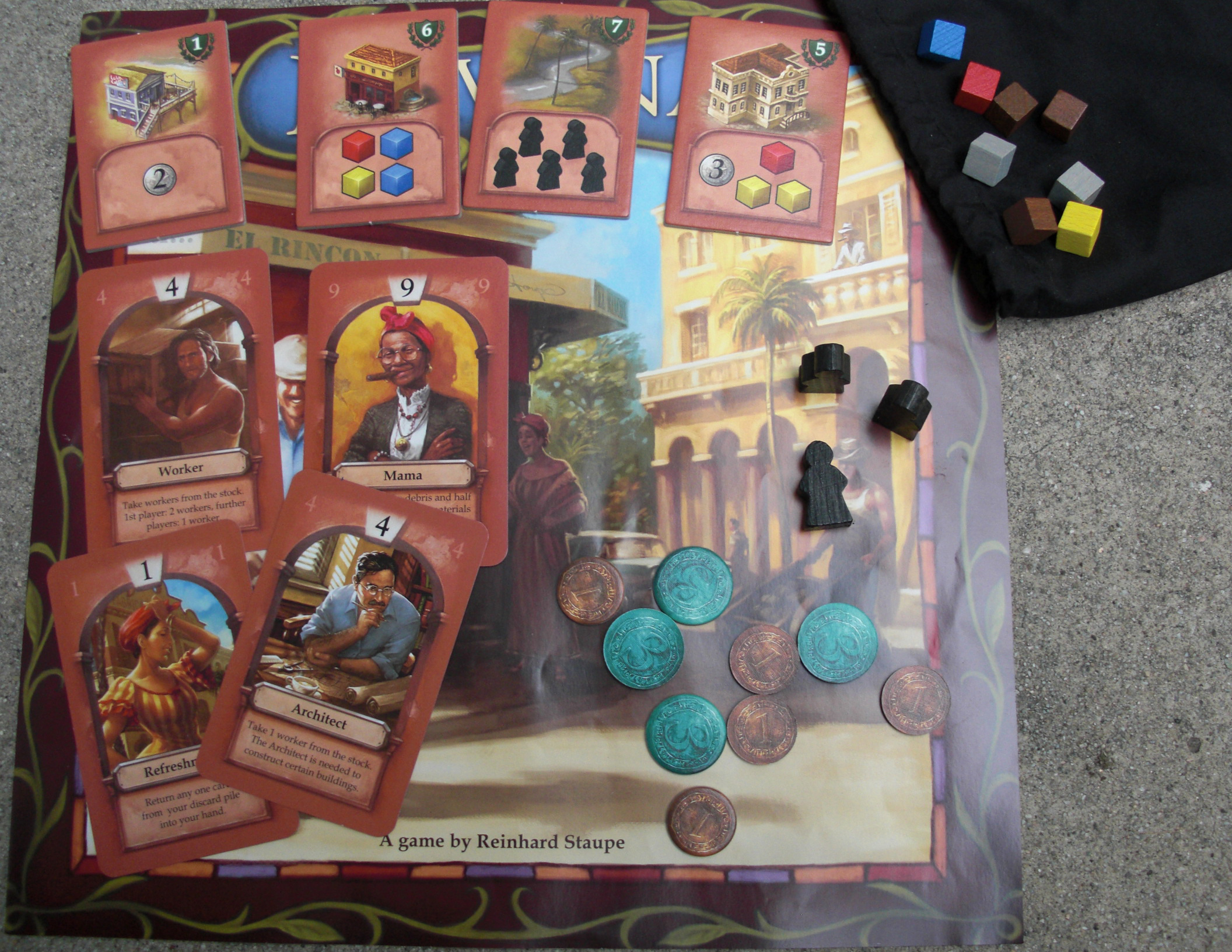 The game has simple rules, but it isn’t boring.  It is engaging and involves strategic thinking.  You need to figure out what the other players are going to do.

These all work for my non-gamer, easily distracted self.

It turns out that all of these things that I like are decided and deliberate characteristics of what is known in the world of board games (and the world in general) as German games.

Well, I did notice that the good games in my recent collection are designed by guys with names like Reinhard Staupe and Klaus Tauber and produced by companies with names like Ravensburger and Marklin.  That was a clue.

So….what makes a German game a German game?  They don’t actually have to come from Germany (although it turns out that Germany publishes more board games per capita than any other country)

1.  Theme: German games are built around a theme, like rebuilding the city of Havana, or building the walled cities and monasteries, roads, and fields surrounding the French City of Carcassone, or building a colony in the new world as the Governor of the island of Puerto Rico. Themes are more likely to be based on some form of economics.  Military themes are almost non-existent.

2. Games for everybody: In other words, you don’t have to be a “gamer” to play or enjoy these games.  Rules tend to be short.  Games are designed for the whole family, simple enough for kids to play, and interesting enough in terms of strategy to keep adults engaged.  Games are typically short, not more than an hour or 90 minutes, and sometimes as short as 15 or 20 minutes.

3. No Player Elimination: These games are designed to keep all players in the game as long as possible, and even build elements into the rules to accomplish this — such as the person with the lowest numbered cards in Havana always going first.

4. Game Mechanics:  German games try to innovate in this area, rather than using familiar rolling dice and moving around a board.  The card dynamics in Havana are good example.  You need resources to “buy” buildings, but, for example, some of the buildings require you to have an architect (which is one of your cards).  There is no game board.  There are cards, but its not a card game. The buildings are tiles arranged in rows. German games that use boards often make them in irregular shapes.  Games tend to promote high levels of player interaction and downplay luck and conflict.

5. Game Designer Recognition: The game designer’s name is usually prominently displayed on the box, and designers are known and have a following.  In fact, an alternative term for German games (which aren’t all German) is “designer games.”

The most famous and popular German game of all time is the Settlers of Catan, designed by Karl Teuber (thank you Albert, for the info). The game came out in 1995 and has since sold 15 million copies and has been translated into 30 languages.  It is referred to as the “killer app” of German games, and is making its way into American gaming in a big way.  See Wired magazine’s article Monopoly Killer: Perfect German Board Game Redefines Genre for the intriguing story.

A shorter more description/rant about the German game advantage over Monopoly is on Tragsnart, which I quote here because it makes me smile:

Why (are British people) so hostile to board games?

Monopoly is a horrible game and is such a negative experience it puts most people off games for life.

There are three things wrong with Monopoly:

2) It is an elimination game. You reach your goal by actually driving the other players out of the game! And worse than that, it is Death By A Thousand Cuts. I give you £5, you give me £8. It takes forever to bleed you dry.

3) It has spawned a hundred worse imitations. If a Brit wants to design a board game, they copy the boring mechanism of Monopoly, the track, the die, the Chance cards, the piles of paper money.