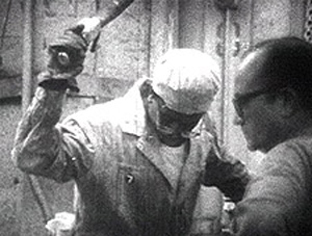 At nearly 139 square miles in size, Detroit is larger than Boston, Manhattan and San Francisco combined.  Home to some two million at one point, the population has shrunk to less than half at 800,000 and decreasing.  Motown, the once Motor City U.S.A., has seen hard times since either one of those appellations applied to a city that’s been struck with what my Uncle Norman would have called, “buzzard’s luck.”

Detroit has been riding a rough road for a long time.  Mayor Bing and wonks like Data Driven Detroit controversially seek to physically downsize the city. This past May, seven-year-old Aiyana Jones was killed by a policeman’s bullet in a tragic incident arising from a botched police raid.  Also in May, Kwame Kilpatrick, who once billed himself as the nation’s first hip-hop mayor of Detroit, was  sentenced from 18 months to five years for violating probation.  You might recall when in office the married Kilpatrick was busted for sexting the woman he was having an affair with, his chief of staff Christine Beatty.  Kilpatrick, whose administration was plagued by several scandals and charges of corruption, and who once had a license to practice law, was initially convicted of two counts of perjury.

Kilpatrick was sent to the former Jackson prison, which is now called the Charles Egler Reception and Guidance Center.  Jackson was once home to another Detroit native, the former pimp and junkie Donald Goines.  In 1969, being re- incarcerated at Jackson, Goines started reading the paperback original novels of another pimp and hustler, Robert Beck aka Iceberg Slim.  This and his mother bringing him a manual typewriter while in the joint inspired Goines to write and eventually publish such books as Never Die Alone (filmed in 2004 with rapper DMX as the criminal protagonist) and arguably his best book, Daddy Cool.

But it’s Detroit in the era of Goines and hit songs like “Only the Strong Survive and “It’s Your Thing,” where the city and places like Hamtramck and even Flint, 66 miles away, were on the boom due in no small measure to the car industry.  Ford, General Motors and Chrysler, were turning out cars and trucks like there was no tomorrow — where at the point of production, peoples’ lives changed materially and politically.

Recently Dr. Pop and I attended a screening (a fundraiser to help send young activists and organizers to the U.S. Social Forum in Detroit next week) at the Community Coalition in South L.A. of a 55-minute black and white documentary originally released in 1970 called Finally Got the News.  Made by Stewart Bird, Rene Lichtman and Peter Gessner, Finally dynamically captures a period in time when the League of Revolutionary Black Workers was on the move.  This was a group who arose from the shop floor of Detroit’s automakers who sought to not only confront the racism and unequal treatment inside the plants, but the complacency and cozy relationship of their union, the United Auto Workers, with management and the police.

According to lefty historian Philip Foner in his book, Organized Labor & The Black Worker 1619-1981, the leaders of the League had gained organizing experience in SNCC and CORE; started a newspaper in 1967 in Detroit called the Inner City Voice to reach out to black workers on the assembly line; were in contact with the Black Panthers, and had come to the conclusion that the principles of Marxism-Leninism would guide their efforts to affect their working conditions.

While Finally Got the News lacks the fuller historical context Foner supplies —and could have forgone some of its cinéma vérité influences and put in captions to tell the viewer who was who — the film is a rousing, uplifting document that offers a glimpse of workers educating themselves, their actions such as conducting wildcat strikes (walkouts not sanctioned by their local), learning from their setbacks, trying to reform their union, and uniting with elements of the community.  Like when high school and junior college kids pass out literature at the factory gates so the workers wouldn’t get dinged by the bosses.

Akin to a bonus feature on a DVD, a plus to the film screening the good doctor and I enjoyed was the live Skype hook-up done after the film with one of the League of Revolutionary Black Workers’ founders, General Baker (no, that’s not his title a la Minister of Defense, but the name on his birth certificate) and his wife, Mariam Kramer, a leader of the Michigan Welfare Rights Organization, co-hosts of this year’s U.S. Social Forum.

Ms. Kramer and Mr. Baker had a Q & A with their younger audience and offered insights and observations about that time and the lessons from then applied today.  When one of the organizers asked Baker about the Detroit rebellion — or riots or uprisings to some of us — of 1967 and how the incident helped shaped the League, he pointed out that even as the city was on lock down from the 82nd Airborne and the like, if you flashed your badge from the auto plant, you could cross police lines so as to get to work turning out that Detroit iron.

That moment was a turning point for activists like Baker, who realized that they had way more power on the shop floor, than in the neighborhoods.  “But those days are not now,” cautioned Baker.

Indeed they are not, as Baker continued to locate the L.A. audience in their moment in history which is one of capitalist contraction as opposed to expansion.

But Finally Got the News (General Baker explained the title comes from a chant you hear in the film, “Finally got the news how our dues are being used…” which refers to a discovery they made that their local was providing cash flow “loans” to the Hamtramck Police Department) provides an aspect of the fight for civil and labor rights not often talked about in our circles.  Let me end by suggesting for your next movie night, a double bill of Finally Got the News and the flawed, but still riveting fictional ancestor to the documentary, Blue Collar, with Richard Pryor, Harvey Keitel and Yaphet Kotto.  They play three line workers and friends who decide to rob their mobbed-up local, and we witness the consequences of their actions that drive them apart.  I mean, come on, it’s not like there’s a large sub-genre of films about race and sold old unionism in ‘70s Detroit – or anyplace else for that matter.

Here’s opening shots from Blue Collor , which was actually shot in the Checker car factory: :