A few weeks ago, Aiyana Stanley Jones was killed by the Detroit police, who raided her home while she was sleeping.  The incident passed the national media’s “if it bleeds it leads” rule and was even more tragic because Aiyana was only 7 years old.

Five days later, 20-year-old Damion Gayles was shot and wounded by the police only a few blocks away.  The community was outraged and the media picked up that outrage as well.

But what is less known about Detroit is how the people in this city that has been under economic, political, and police siege for so long, have been gradually building an infrastructure for peace and promise from the grassroots. 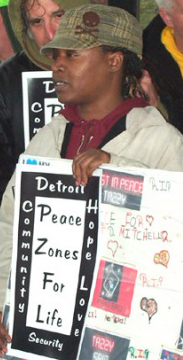 When violent crime and police brutality spiked in the 90s, the Detroit Coalition Against Police Brutality was formed to document acts of policy brutality and misconduct, to create greater accountability and justice from law enforcement, and to advocate for a police force that is more racially diverse, more respectful, and more adept at dealing with and serving people of different backgrounds and abilities.

One of the Coalition’s core organizing strategies is to form “Peace Zones for Life” across the city in which mediators are called in to arbitrate conflicts between neighbors and families rather than the police.  Their idea is to “put the neighbor back in the hood” and to transform tragic events into community-building efforts for safer futures.

The killing of Aiyana and shooting of Damion have sparked the creation of new Peace Zones  across the City.  The shootings are tragic, but the innovation and tenacity of the Peace Zones deserve celebration.

Another kind of peace zone are the spaces and places being made where youth can participate in change-making and thrive.  Central to such efforts are veteran activist Grace Lee Boggs (who will be 95 in July) and the Boggs Center, which was established in 1995 by friends and associates to honor and continue the revolutionary legacy of theory and practice of Grace Lee and her husband, James Boggs, now deceased.

In keeping with this legacy, the Boggs Center asserts that youth must be involved in rebuilding the city because they are pivotal to the success of any community-building process. 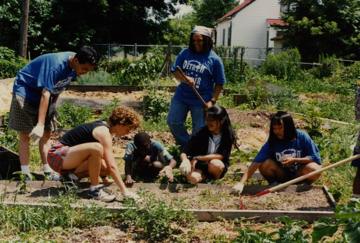 Grace Lee Boggs rests that case on history. “More than forty years ago, in the wake of urban rebellions, Dr. King said that young people ‘in our dying cities’ need direct action projects that transform themselves and their surroundings at the same time.”

The Boggs Center co-sponsors Detroit Summer, which is “a multi-racial inter-generational collective in Detroit, working to transform ourselves and our communities by confronting the problems we face with creativity and critical thinking.”  Detroit Summer youth participants plant gardens, create public art and murals, clean up the streets and also organize and lead media arts projects, community-wide pot-lucks, speak-outs, and parties.  Here are some of the artistic results: 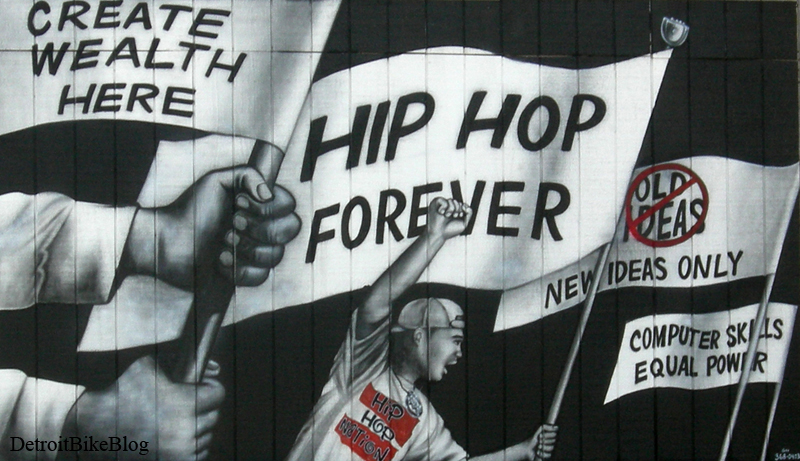 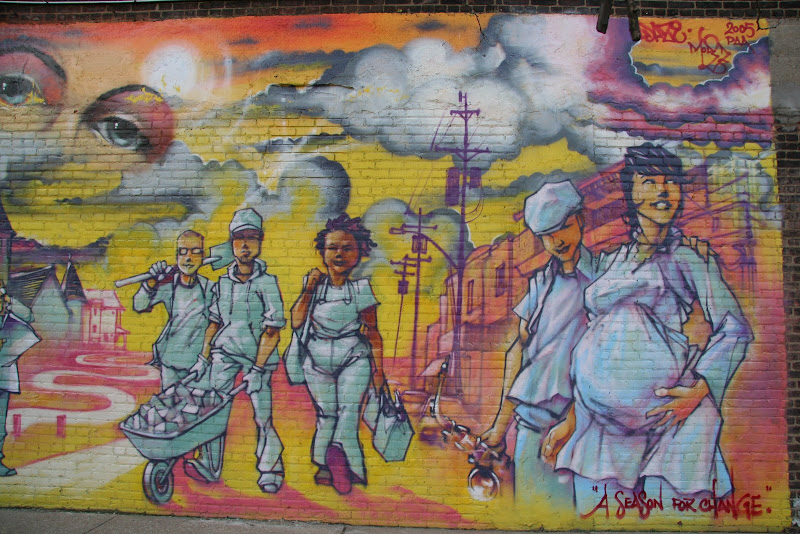 The context of these hopeful community efforts for the development of young people is more than an uphill battle.  Mayor Bing plans to downsize the city so that its future potential will match its current population, the result of which being that some neighborhoods will simply be eliminated and its residents moved someplace else.

And central to the overall downsizing plan is the future of Detroit schools. A quarter of Detroit’s schools are being closed and consolidated into “mega-campuses” or privatized into charter schools.  The Boggs Center is responding with characteristic deeply thoughtful and principled effort, to develop their own neighborhood school as a model for the city and for schooling in general.  Nate Walker, a former Detroit schoolteacher and member of the school development team at the Boggs Educational Center describes the evolution of that effort in this excerpt from a Democracy Now interview:

…The founders of the Boggs Educational Center met in 2002 at the Boggs Center, where Grace was hosting discussions called the Freedom Schooling Discussions…And during those discussions, we talked about what transformative education would look like in the city of Detroit. And so, we began to tackle questions like why are we educating people, and how can we educate them in a way that deepens their humanity and ultimately empowers them to become agents in their own lives? And those discussions for us continued for seven more years, where we began to formally meet and talk about how we can take some of that theory of education as transformation and turn it into a program for our community. So we’re in the process where we’ve began to develop our curriculum and the type of school that we want, one that becomes a community hub. We don’t intend on opening for another year, because we want to do a year of intensive community planning, where we engage folks to really invest in the process of planning a school.

A video of the full interview, which gives you a good sense of the privatization “solution” underway in Detroit, is provided below:

For a taste of the deeper influences on Boggs Center’s thinking behind better schools check out Grace Lee Boggs’ post on Redefining the Value of School on the Boggs Blog.

The richness of Detroit’s innovations from below, inter-generational sustainable community-building, and push-back against draconian plans to re-shape the city is well-captured in Shawn Rea’s’ Detroit Renaissance article in Yes! Magazine.

A vision of a different Detroit, one that embraces the notion that another world is possible, one where the right to the city is fully realized, is expressed in this call to action by Detroiters for Dignity and Democracy, reproduced in full below from the website Detroit City of Hope:

THIS IS OUR CITY!
People are resisting the assault on our city. Detroiters are standing up against the schemes of Mayor Bing, Emergency Financial Manager Bobb and powerful foundations who are plotting to take our land, close our schools, sell our last public hospital, destroy whole neighborhoods and are putting everything they can think of up for sale.

Behind closed doors they are making plans that will affect our city and our children for generations to come. They refuse to share their plans in open forums, refuse to support the elected school board and challenged court orders questioning their powers. The private foundations supporting this secrecy are not accountable to any one, using their money to dictate winning and losing neighborhoods.

We are outraged by this assault on our city and on democracy. We know there is a better way. Across Detroit, long abandoned neighborhoods are coming to life with gardens, art projects and new businesses. Schools are resisting the effort to turn our children into mindless test takers, creating imaginative life affirming programs supporting community growth. We are restoring community ties, turning war zones to peace zones for life.

These activities have caught the attention of national and international media, telling the story of a new Detroit resurgence. These activities have also attracted the attention of those who see another opportunity to make money by shifting public resources into private hands. This is our city. These are our children. No one has a right to determine our future without us.