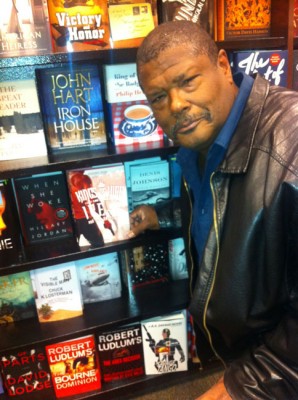 I’ll often say this when I’m on a panel about writing mysteries; I’ll mention that any student or fan of the genre should read the Maltese Falcon by Samuel Dashiell Hammett who went by his middle name as a writer.  Originally serialized in Black Mask, a pulp magazine where several well-known mystery writers got their start, the novel was published in 1930.  Now the titular hero of the book, private eye Sam Spade, only appears in this novel and a handful of short stories.  Hammett wrote far more stories and two novels with his nameless private eye, the man known only as the Continental Op.  This short, pudgy balding man worked out of the Continental Detective Agency in San Francisco, also the home of Spade.

While the Continental Op stories are not chopped liver, but for my money, the Maltese Falcon is the template for the characters and situations that come along decades later, even today, in mystery and crime stories.  The patter, the cynical PI (“He looked rather pleasantly like a blond satan,” Hammett wrote), the duplicitous femme fatal, the quixotic villains, and the fabled dingus that everybody is willing to do everything to obtain.  For a couple of years not too long ago, me and writer Eduardo Santiago taught several reading and discussing the classics classes to incarcerated youth.  This was part of a project by the Children’s Institute — our friend and fellow novelist Nina Revoyr who works there brought us onto the gig.  The goal was the bring the love of reading to underserved communities, and you can’t get more underserved than young men in the joint.

These youngsters weren’t loveable rapscallions like the Dead End Kids.  Some were in for homicide and others sex crimes.  Yet in addition to romance novels, to the one, they all dug the Maltase Falcon for how each character never exactly said the truth and how they were only out for themselves – or so it seemed.  We’d read the chapters in round robin fashion and stop at various intervals to dissect a passage then go forward again.  While these youngsters were not what you’d call ideal students, we could get them quiet enough to pay attention and read, for the old-fashioned dialogue always hooked them.  Like this example when Spade is questioned at his apartment by two cops he knows about the recent murder of his partner, Miles Archer, early in the novel.

“Having Miles knocked off bothered me, then you birds cracking foxy.  That’s all right now, though, now that I know what you’re up to.”

Once we got to talking about Hammett’s words, Eduardo and I could also then engage the  youngsters about plot, symbolism, foreshadowing and so on.  Read the Maltese Falcon if you haven’t, and if you haven’t read it in awhile, do so again.  You’ll dig it.

Another mystery writer figures in my selection of the indie film, A Better Life.  I’m not sure if it’s one of my all time favorites, but it’s certainly one of the best I’ve seen this year.  The film is based on a reworked screenplay by Roger L. Simon, the creator of the burned-out-would-be-revolutionary private eye Moses Wine in the Big Fix — called the hippie Sam Spade by the L.A. Times.  Originally entitled The Gardner, it’s a simple but powerful tale of a father and his knucklehead, but well-meaning teenaged son.  Pops is a humble, hard working gardener.  He’s an undocumented worker who borrows money from his sister to buy a used pick-up truck so he can be his own boss in the gardening business in L.A.

The truck is stolen by a fellow day laborer to sell for money to send home.  The film’s most direct antecedent is De Sica’s post-WWII The Bicycle Thief, based on a novel by Luigi Bartolini. In that story, a poor man must find his stolen bike to keep his movie poster pasting job so as to feed him and his young son in war ravaged Italy.  Also like Charles Burnett’s  1970s The Killer of Sheep, A Better Life chronicles people’s everyday small triumps and tragedies in a nod to the Italian neo-realism style ushered in by De Sica and others.  The father and son’s search take them into those parts of the city little seen on movie screens – Boyle Heights, South Central and Pico Rivera.

The story is both a journey across the landscape as well as a journey of the relationship of man and boy.  I saw some of my dad Dikes in Demián Bichir’s Carlos, a father dealt a sorry hand, but doing his best he can to provide for his son and just maybe make a better life for him.  But unlike my dad and those of the Black Migration who could at least be absorbed into a booming industrial sector after WWII and the end of the Great Depression, Carlos’ L.A. is ours as the effects of the Great Recession are not likely to end soon as the gap between us the 99ers and the One percenters widens.

In the Maltese Falcon, the hunt comes up empty for all concerned.  In A Better Life, the hunt results in a Pyrrhic victory, but what’s more important is father and son discover one another.  That the truck is a secondary thing to them becoming closer.  But as Spade and the Occupy Wall Streeters would remind us, you can’t let those greedy bastards just take and take from us – at least not without a fight.