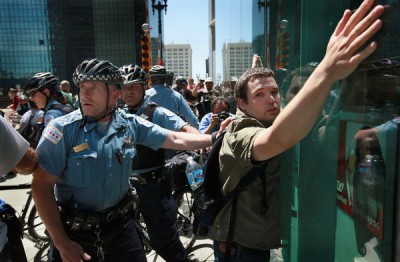 While Chicago hosts the NATO summit, where military leaders and their like-minded political counterparts turned conference rooms into war rooms and exhibit halls into transatlantic strategy centers, my thoughts wander to the notion of democratizing security.

Like all NATO summits, this one came without a suggestion box. Nowhere during the weekend could the general public contribute to the conversation. And so thousands of people took to the streets to make their voices heard, whether or not the generals choose to listen.

In the decades that have passed since its founding in 1949, NATO has shifted from a mutual self-defense organization to a global military alliance that advances aggressive invasions and preemptive wars. In it’s current form, NATO is representative of a military-political partnership that runs on elite exchanges and excludes everyday voices. It is controlled by decision makers who tightly control the narratives of war, guarding their legitimacy even when public favor fades away. So that when bombs fall on common people and missile strikes take the lives innocent civilians, they are the causalities of war operations that are deemed ‘necessary’ for the future of freedom. And – following the public relations catastrophe of Vietnam, where cameras laid bare the tragic truth of war – media cameras are now clearly forbidden to cover destruction in detail.

What would it mean to democratize security? How would outcomes change?  Would wars persist? Would oil demand still determine the use of weapons? Would military spending still dominate federal budgets? The militaries that are a part of NATO account for 70% of the entire world’s defense spending. Where would those trillions go if our democracies were more direct, if launching wars required public forums and special ballots?

These are big questions, perhaps unknowable unless we actually try to answer them. My hunch, and my hope, is that when push comes to shove, people would rather build a thousand schools than another fighter jet. If actually empowered to choose where their tax dollars should go, then our political priorities would surely shift, and the war machine would indeed go out of favor. Education and healthcare would become vital investments, and the military might actually have to hold a bake sale or two.

This vision was expressed at the dawn of the Iraq war, the operation whereby the Bush Administration used NATO to help set a precedent for preemptive warfare.  On the night before the invasion, in over 150 cities across the world, public crowds spontaneously gathered and called for peace. I was in Argentina on that night and marched through the streets of Buenos Aires, walking with local residents, gathering concerned city dwellers wherever we could find them. Or, in many cases, walking until they could find us, coming outside to join the chorus of the outraged. This picture, whereby the populous amassed itself to call for peace, was unfolding on countless streets on every continent of this earth.

That night taught me a lot about democracy, about the ability of people to create their visions for a brighter world at a moments notice. Yet rather than listen, American military leaders and their allies, sent soldiers into a wildly unjust battlefield, thereby launching a 7-year war based on the lies of leaders in the would be free world.

Once those lies could no longer stand the test of time, a new narrative was formed. Iraq – like so many other military operations – was now a war to defend democracy, tackling tyranny with corporate contracts and private mercenary forces. Whether we bought it or not, that was the new story of war. Yet what if the only way to truly defend democracy was to democratize defense? What if peace were a project built on public participation? That’s my question for the NATO suggestion box.

Here is a video of Democracy Now‘s coverage of the demonstrations surrounding the NATO meeting: