Construction in Black and White

Last year I read The City and the City a sci-fi detective story by China Mieville, which takes place in two cities that are in some places adjacent to each other, and in others, actually occupy the same physical space.  To manage and maintain the distinct existence of the two cities, their inhabitants have adopted a deep cultural practice of “unseeing”   — the ability and requirement to recognize, but not-see, things in the other city.  Things that are actually there, but cannot be.  The inevitable infractions of this law are called a “breach,” which is the highest crime imaginable by either city.  These crimes against the unseeable are managed by their own transborder police force, called the Breach.

It’s a great read, which I highly recommend for lovers of great fiction.  But I bring it up here because of how well this idea parallels one of the most poorly understood resistance movements of recent U.S. history — the resistance by unions, employers, and elected officials to the actual enforcement of affirmative action, specifically and particularly in the building trades which, when accessible, provide some of the best-paying jobs to working class Americans.  Forty years later, organized labor and employers still “unsee” the value of black workers in a manner that might even challenge the imagination of Mr. Mieville.

This history is reframed and ably presented in a recently published anthology edited by academics David Goldberg and Trevor Griffey called Black Power at Work: Community Control, Affirmative Action, and the Construction Industry.  Each chapter offers detailed descriptions of events between 1963 and 1973 when redevelopment projects and affirmative action programs collided with complicated movements by black communities to control the development of their neighborhoods and gain the right to work.  The leaders and citizens of these cities-in-the-cities were all African American.

The stories in Black Power at Work include inspiring accounts of the bold innovations that these movements produced to transform the distribution of opportunity between the races in the United States in a meaningful way.  Those elevated moments are, however, tempered by the despair of possibilities that are to this day unfulfilled. It is this history, reframed and reproduced that explains the importance and common sense of the current initiative to create a Black Workers Center in Los Angeles.  (an important a story, deserving its own piece, coming soon). 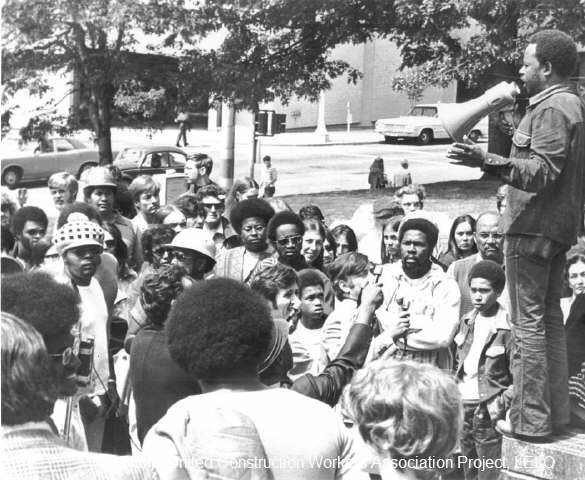 Black Power at Work is framed around some big themes that are elaborated in detailed case studies of key events in Brooklyn, Newark, the Bay Area, Detroit, Seattle, and Chicago, including:

Some of these examples are:

1.  General and Specialty Contractors Association was established in 1968 in the Bay Area as one of the first minority contractor associations to organize across craft lines in the US with a two-tiered mission of providing  managerial and technical training to contractors & to train minority workers for the building trades.  In three years in grew from 16 to 73 contractor members, six of whom pooled their resources to form Trans-Bay Engineers and Builders, an effort to approximate the scale and capacity of larger white firms.  Trans-Bay ultimately became the first minority firm to build a high rise in the U.S.  Over the next seven years more than 100 associations like General and Specialty were organized around the country.

So that this story is not simply read as an achievement of  “black capitalism” it is important to understand that the distance between black contractor and black worker was much narrower than it might be today.  Many black contractors at this time were simply journeyman who couldn’t get work through the racially exclusive unions.  They held on to their union cards so that they could give other black contractors a few days of work when times were slack.  They were contractors and workers at the same time.

2.  Around the same time in 1968 nine black contractors in Detroit formed Allied Workers International Local 124, an independent, black-run, multi-trades union, that supplied trained workers to black and white contractors alike, earning the ire and pushback from the AFL-CIO and its affiliated unions.  Local 124 was but one form of Black Power unionism emerging at this time in Detroit, which also included  black caucuses, wildcat strikes in defiance of union procedures, black unions organized outside the AFL-CIO, and the Revolutionary Union Movements, such as the League of Revolutionary Black Workers.

During the summer of 1969 CUCA shut down 24 federal construction sites in Chicago totaling more than $80 million in building contracts.  CUCA leaders articulated the goals, but the protests themselves were led by an alliance of three major Chicago Gangs, the Vice Lords (Lords), the Blackstone Rangers (Stones) and the Disciples (who later referred to themselves as LSD).  While their presence was intimidating, all of these actions were markedly non-violent.

4.  In Seattle, the United Construction Workers Association (UCAW) was formed by black electrician and contractor Tyree Scott, who also headed up a black contractors association in the area.  The purpose of the Alliance was to fight on-the-job resistance to affirmative action.  Scot had already led direct action protests in Seattle for 3 years, leading the U.S. Department of Justice to file suite against the four  elite building trade unions — IBEW, Sheet Metal, Plumbers & Pipefitters, and Operating Engineers.  In 1970, federal judge William Lindberg found the racially exclusive union hiring halls and apprenticeship programs in violation of Title VII of the 1964 Civil Rights Act.  Because previous attempts to negotiate voluntary affirmative action had failed, Lindberg ordered the unions to train 100 black special apprentices per year.  Over the next two years, the unions failed to meet those goals, but were unpunished.  In response, UCAW organized the workers who were illegally denied work under the law suit, taught them their rights, expanded their membership, and ultimately led many dramatic direct action protests which included:

What is needed today, when so little of the nation’s “stimulus” funds have flowed to benefit minority workers and businesses and communities, are more strategies that make individual indignities and abuses collective and public, building a will towards real remedies.  I am looking forward to seeing what those will be, as organizing around these issues, in the context of our current historical moment, are bubbling up from the ground. I am looking forward to a time of many more breaches of unseeing ––  a time when the business-as-usual of exclusion is finally reversed.