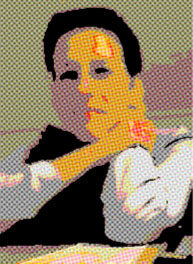 I eased into Comicon’s hugeness with a panel on Comics in the Library, and just as I was feeling a little self-consciousness about my safe and school-marmish choice, I was rewarded by the sight of library-comic-lady Francisca Goldsmith’s turquoise hair.

It was a great panel, particularly for Dr. Pop people who think comics have a lot to offer the world of “complicated things, simply explained.”

The turquoise-haired Francisca Goldsmith, self-described as “pushing comics in libraries since the 80’s.”

Joann Jonas, San Diego County Libary, a Comicon first-timer, who got a round of applause for that.

The discussion was largely by and for librarians, how and why to get comics and graphic novels on the shelves, how to promote them, how to overcome staff and parent resistance, how comics are such a great bridge for visual learners, and other such stuff.

Meredith explained that she was a big proponent of the “gateway drug” strategy — using comics that have some higher level of acceptance to get the library and its patrons hooked.  Her examples include Book Hunter, a graphic novel mystery that takes place in a library; Jeff Smith’s Bone; the fantasy Unwritten; and Fables, whose characters are derived from fairy tales and folklore.

Along with the intelligence and passion the panel had for their subject, my favorite part was their personal favorites and recommendations, which along with some of the above lists will keep me busy and spending at Meltdown for a while (or maybe, I hope, at the library!?).

First, here are the two that were my gateway drugs:

Persepolis, about a young girl’s coming of age during the Iranian Revolution.

And next,  a range of favorites from the really great panel:

Footnotes in Gaza, cartoonist/journalist Joe Sacco’s investigation of civilian deaths in Palestine.  Jill says anything by Joe Sacco is worth a read.

A.D.: New Orleans After the Deluge, by Josh Neufeld, follows six people from the hours before and days after Katrina.
The Photographer, by Emmanuel Guibert, takes you into Afghanistan in the 1980’s with Doctors Without Borders, combining photos and drawings.

Sid Jacobson’s and Ernie Colón’s graphic adaptation of The 9/11 Report, which as Raina explains, unlike the report itself, visually shows how many things occurred simultaneously.

Pedro and Me, An autobiographical story, where cartoonist Judd Winick becomes good friends with Pedro Zamora, a gay HIV-positive AIDS educator, through MTV’s The Real World.

Tracy White’s How I Made it to 18, about her journey from mental illness and back.

The Manga Guide to Molecular Biology.  The title says it all.  There are more manga guides from this publisher.

10 Inventors Who Changed the World. For middle school kids.

The Secret Science Alliance and the Copycat Crook.  For elementary to middle school kids. An 11-year-old nerd hero.

Merideth says the single-most popular comic in the Phoenix library is The Walking Dead. Here’s a review of its first compendium from Graphic Novel Reporter.

Logicomix, subtitled “An Epic Search for Truth” is about the foundations of mathematics (check out the video trailer below)

Footnote: This is not a graphic novel or a comic, but still a Comicon-relevant, complicated (if esoteric) thing, simply explained that I cannot resist passing on:

Becoming Batman. What are the scientific possibilities of achieving batman’s powers, you ask? Movement researcher E. Paul Zehr tells it all.