As I stumbled back home late one Friday night after many hours of travel to get from a tiny town in Southern France to London’s own Tower Hamlets, people busy painting a line along the pavement and doing various other things made it hard to get my roller bag past them. I was not pleased, but I woke up to this: The London Festival of Architecture brought the University of Innsbruck’s Walk the Line project, and the weekend was full of activities, games, food (I suppose it was too much to hope for it as a Johnny Cash reference). The statue of Gladstone in front of the old church looked happier with his blue scarf. 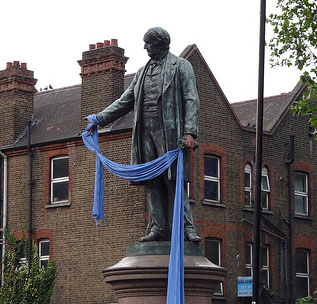 None of that was for me sadly, I was exhausted and had one hell of a deadline coming up. But the idea was interesting, changing how people use public spaces and form community with the simple use of some paint and some props.

I think, however, that the aftermath was even more interesting, because for a few days the props were left, the hosts were absent, and my neighbors were left to do with the space and the props as they would. Of course, I was still on deadline, so I just saw it as I walked to and fro work and school. But this was after all just a student project, a taste of what this space could be with just a tiny bit of investment.

They took everything away, and my own pictures came just a few days late to capture the small magic – so I have borrowed some photos from Loopzilla, who has made them available for just this purpose.  And you can read a short story about the effort on Diamond Geezer.

But let’s take the Seating Furniture for example: 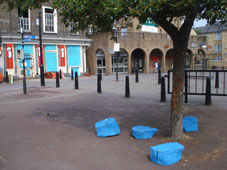 They had made innovative little tables out of plywood with holes in the middle to fit down over the bollards, and painted tree stumps blue for people to use as seats.  And all kinds of different people used them, from big burly guys to the guys who worked in the little shops to families to teenagers. The same way they used the “dinner at eight” station with a more traditional table and chairs. It made me happy to see a whole family sitting down there on a warm summer evening eating a meal. 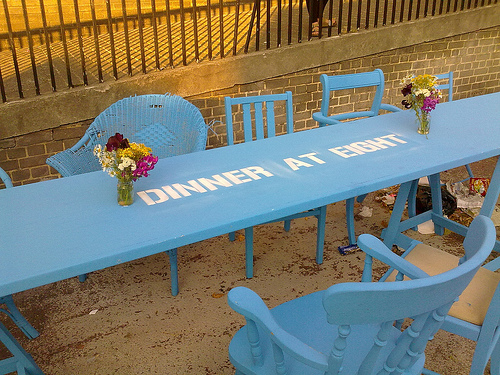 Now I have no idea what this was supposed to be exactly, it’s the wrong shape and size for hopscotch…

And I don’t think anyone is much celebrating the olympics around here, but kids seem to like to play on it. They play in the “official” games area as well, with balls and stones where the tic-tac-toe board was painted (noughts and crosses anyone?) that once had x’s and o’s. And loads of different people used the “theatre” (just another bunch of blue tree stumps) as another place to sit and chat in the shade. These things very visually created more opportunity for my neighbors to come together in ways they wouldn’t usually do, and spend time in an otherwise rather unwelcoming space that most just travel through, apart from the hordes of teenage boys in the afternoons and evenings, and the chatty crowd in front of the bookies. 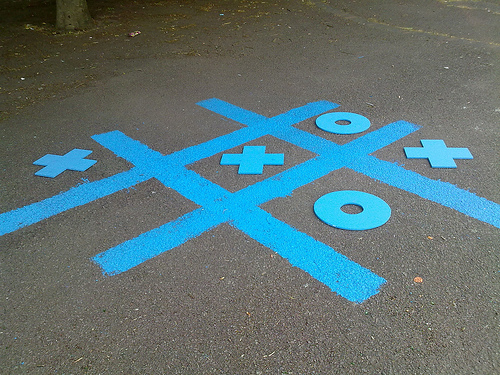 So now that it’s gone, what are the lessons learned?