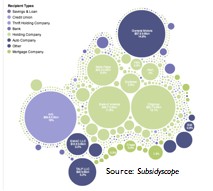 The most comprehensive, comprehensible, and up-to-date resource about where bail-out money is going, to whom, and for what purpose is the ProPublica site — tagline: journalism in the public interest.

In their own words, here is what you can find on their site:

ProPublica also tracks Stimulus program dollars in useful ways ranging from how quickly agencies are spending money, to stimulus projects near you, down to the per capita sending in your county — plus a lot more.

Launched in January 2009, by the Pew Charitable Trusts in conjunction with the Sunlight Foundation, Subsidyscope exists to make government subsidies transparent to the rest of us. They started with the financial sector and have since gradually applied the same transparency treatment to other parts of the economy including transportation, energy, and housing.

For those of you who want to know “how the *#@&^% did that happen?,” two other sites, Open Secrets and MAPLight, look at the relationship between subsidies to lawmakers (otherwise known as campaign contributions) , bailout and recovery laws that were voted in, and which industries benefited from those laws.

Check them out.  And if your favorite sites aren’t listed here, let us know.