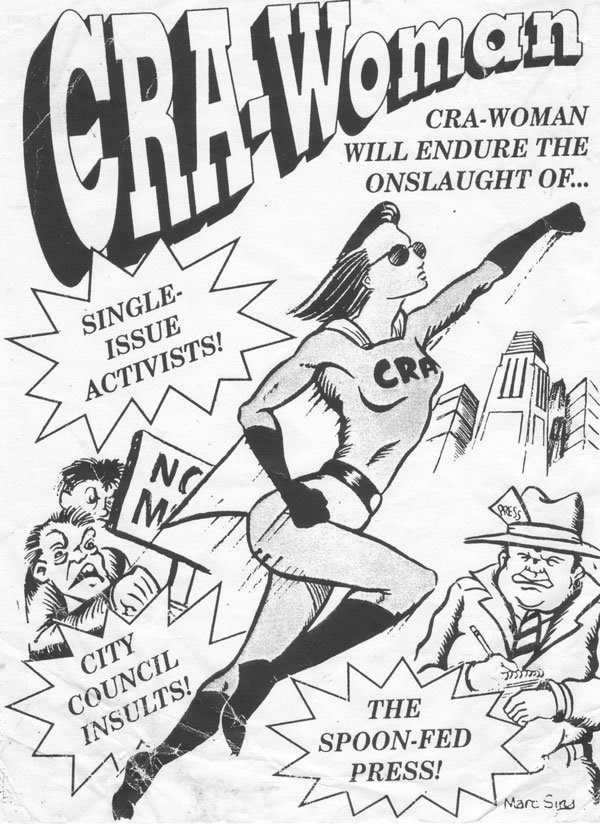 In 1990, I organized a grassroots coalition against redlining and for community reinvestment. It was led mostly by women of color and a few very exceptional men.  That was my job.  We were called Communities for Accountable Reinvestment.

We did direct actions against banks, forced the Federal Reserve to hold hearings in the community, we negotiated with bank presidents, and we even created our own people’s bank, called the South Central People’s Federal Credit Union.  We were, as my now-deceased comrade Clyde Johnson used to say, a raggedy coalition of determined folks.

All this occurred in the wake of the Savings & Loan crisis when the policy solution was a humungous bailout that favored the banks and hurt the people.  We used the facts of that narrative to teach people that the government, aka the people, subsidized the banking industry with low-cost loans, insured deposits, and yes, when things got tough, bailouts for the biggest.  For those reasons, we asserted, banking should be considered a right.

This all made sense to our members who had never received their proper measure of fairness or investment from banks that the Community Reinvestment Act of 1977 (CRA) promised, but never delivered.  But communicating the painful consequences of financial discrimination to others –– to the press, to politicians, to people who didn’t suffer discrimination –– remained an uphill battle.  “Banks are businesses,” they would say.  And as our country veered neo-liberally towards deregulation, we were constantly reminded to leave business to the business people and banking to the bankers.

And then the riots happened.

The beating of Rodney King was shown over and over and over on television to the entire world. (“Are all L.A. cops white?” asked friends in New York.)  The fires that could be seen from the big windows of my eighth floor downtown office where I was teaching my Community Scholars class, this time, unlike Watts, were not isolated, but were in many communities. In Pico-Union.  In Hollywood.  In Mid-City.  And in South L.A.

Police abuse coupled with disinvestment became problems that affected more people than its victims.  For a minute.  The streets of L.A. were absent police and black men could walk freely.  For a minute.  A window was open.  We all could see the unseeable, or at least that which many had been trained not to see.

I  looked around at my class of community leaders.  Robin Cannon from Concerned Citizens of South L.A.  Leonardo Vilchis from Union de Vecinos.  Sister Diane Donoghue from Esperanza Community Housing was visiting.  I was grateful to be in a rare room in the company of many solutions at a time when the city was exploding with rage and confusion about its problems.

As coincidence would have it, the day following the riot weekend was one of those days I was scheduled to testify in Congress about the arcane business of disinvestment and community reinvestment.  I took a redeye to D.C. to maximize the time I could be with Miles and Chelsea, my now-grown kids, who were then maybe five and six years old.

The hearing was presided over by Esteban Torres and was generated as a response to a big study by the U.S. Department of Housing and Urban Development that revealed that people of color weren’t getting loans from the banks.  And that was news to the press, the politicians, and people who actually got loans from banks.

Here are Congressman Torres’ opening remarks from that hearing…

And excerpts from my own testimony:

The riots brought all these facts and figures into a deeper, palpable relief that now included the pain and the consequences of deprivation and segregation.

The riots prompted the National Credit Union Administration to finally approve a charter for the South LA People’s Federal Credit Union as well as several others around the country after over a decade of silence.

Because of the riots, forty mainstream bankers joined Carlton Jenkins, president of black-owned Founders Bank on a community reinvestment tour of South L.A.

After the riots, Bank of America set up an emergency loan fund for small businesses with very favorable underwriting criteria and actually got money into South L.A. businesses.

A window may have opened, but the foundation of assumptions remained the same.  The forty bankers were accompanied by a five-car police escort, muddying the message that South L.A. was worthy of investment.

Bank of America had to scramble to set up a repayment system for their loans when the businesses came to pay them back because they had assumed that was never going to happen.

And so it went.

Bank de-regulation continued, expanded, and extended.  Sub-prime loans became so profitable that redlining was recreated in a new form –– not this time by denying credit, but instead, by offering the worst kind of credit ever.  It was bad when you couldn’t leverage your savings with a loan to buy a house and then build some stability and wealth pass on to your kids.  But it was way worse to get a bad loan and then lose your savings, your home, and your community.

Our nation’s first response, again, was to help the big banks who created that situation, leaving communities like South L.A., to fend for themselves as homes were shuttered and services defunded.  We are left again to depend on the resiliency of our own organizations and relationships and fortitude to  rethink and rework what self-determination, dignity, and respect can mean in an age of waste, growing inequality, and a preferential option for the rich.

Yet I have every confidence that we will figure it out.